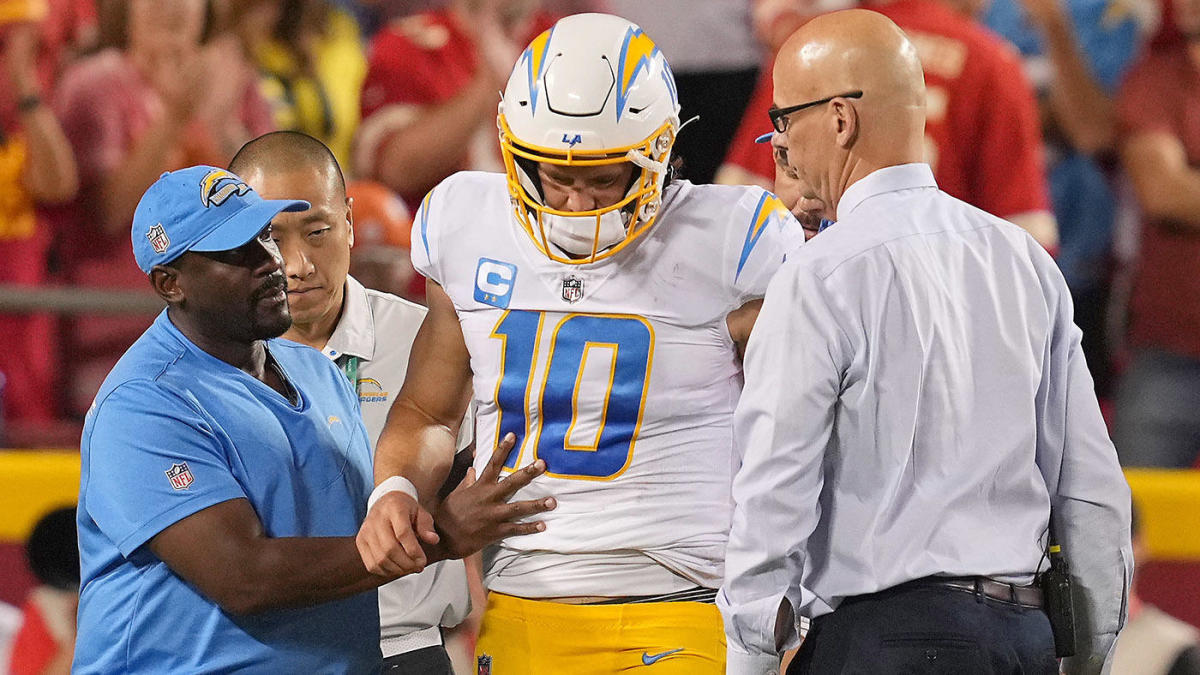 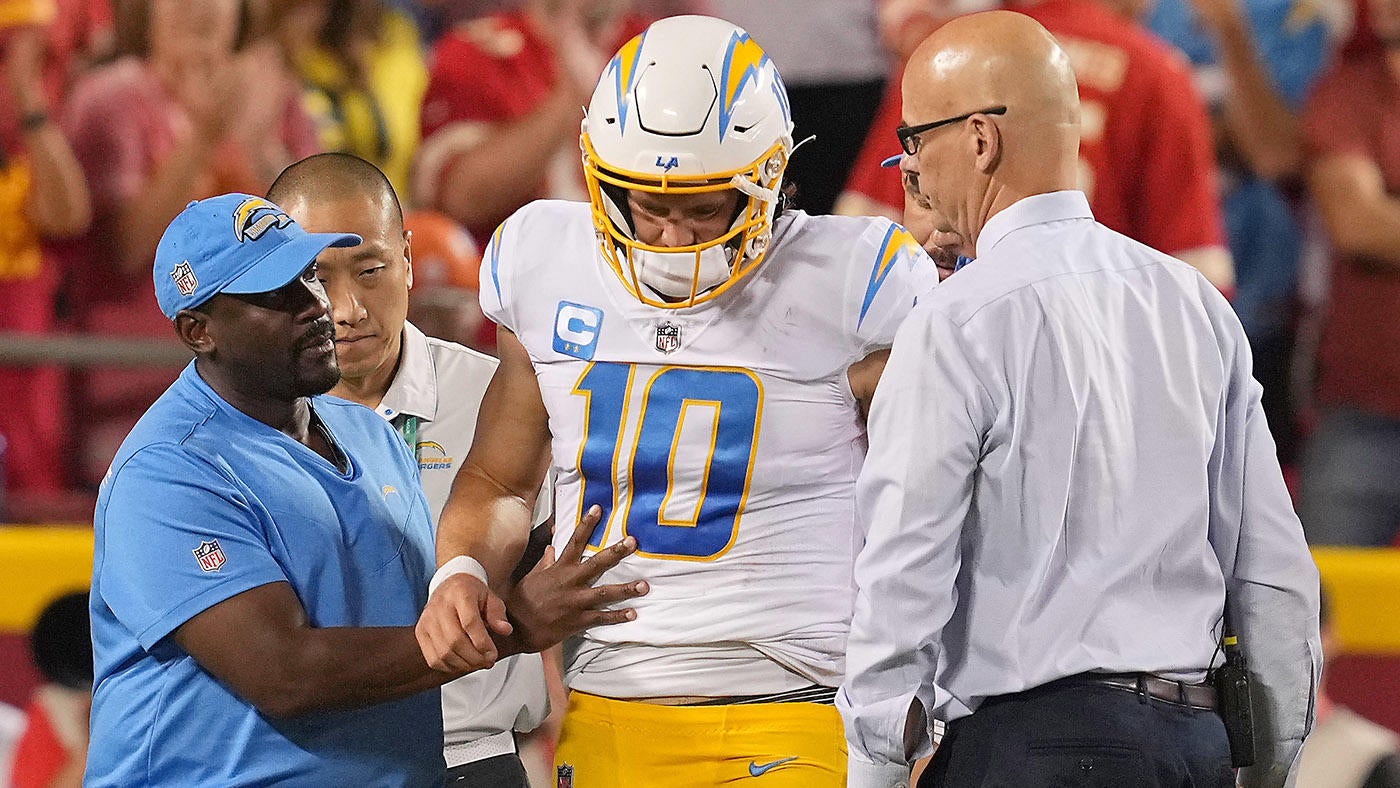 We are in the midst of Week 3 in the NFL thanks to the Steelers and Browns kicking us off on Thursday night and now we have the main course on deck, which features a full slate of games on Sunday. Of course, injuries will be a key storyline to follow as we enter the weekend, especially with the bulk of the teams across the league submitting their final injury reports.

Despite a stellar start to the season, the Bills defense will be down a number of key personnel when it travels to Miami to take on the Dolphins. Meanwhile, the status of Chargers superstar quarterback Justin Herbert also remains fluid as they get set to play host to the Jacksonville Jaguars.

With teams finishing up the week of practice, they’ve released their final injury reports and rolled out game statuses for Week 3. Below, you’ll be able to find each of those reports and a breakdown of some of the biggest injuries.

Kansas City will once again be without starting kicker Harrison Butker as he continues to deal with a left ankle injury. In his place, Matt Ammendola will likely retain kicking duties after connecting on both of his field goals and all three of his extra points in the Chiefs’ Week 2 victory against the Chargers. Meanwhile, receiver Mecole Hardman (heel) practiced fully on Friday after being a limited participant to begin the week and carries no designation.

The biggest news for the Colts is that they’ll be getting a boost in the receiving game as Michael Pittman Jr. does not carry a designation after being a full participant in practice on Friday. Pittman was sidelined last week due to a quad injury. Rookie wideout Alec Pierce will also play after clearing concussion protocol. As for Leonard, he has been ruled out, but head coach Frank Reich noted this week that the linebacker had a “really good week.” He also hasn’t suffered any setbacks, so his return could be around the corner.

Lions rookie pass rusher Aidan Hutchinson returned to practice on a limited basis Friday after sitting out the first two practices of the week due to a thigh injury. He is officially questionable. Meanwhile, star running back D’Andre Swift was also listed as questionable after back-to-back days of being limited.

Neither Booth nor Smith practiced all week, so seeing them ruled out isn’t totally surprising. That said, Hendricks’ status will be worth monitoring after he popped up on the injury report on Friday as a limited participant due to a toe injury and is now questionable.

Collins did not practice all week, but the team is still listing him as questionable and holding out hope he can play in Week 3. If he cannot, either D’Ante Smith or Hakeem Adeniji will likely get the nod to start at right tackle.

With the Jets, the are still holding back quarterback Zach Wilson as he continues to recover from a preseason knee injury, but this could be the final week he will be sidelined. In his absence, Joe Flacco will continue to play under center. Meanwhile, Davis and Fant were the only two questionable Jets that were limited on Friday with the rest listed as full participants.

Baltimore saw Ronnie Stanley not participate in practice on Friday after being limited throughout the week, so he’s trending in the wrong direction. Meanwhile, each player listed as questionable was a full participant during Friday’s session, except for Isaiah Likely, who was limited. Starting receiver Rashad Bateman did not practice Friday, but the team notes it was not injury related and he carries no designation.

Patriots receiver Jakobi Meyers and safety Kyle Dugger returned to practice on a limited basis Friday after both were held out on Wednesday and Thursday. Meanwhile, linebacker Raekwon McMillan is heading in the opposite direction; he did not practice Friday after being limited throughout the week.

Despite being questionable, the Texans listed Collins and Deculus as nonparticipants on Friday, so they are not trending positively heading into the weekend. Quarterback Davis Mills was listed on the injury report with a right thumb injury, but was a full participant all week and carries no designation.

Roquan Smith did not practice all week due to a hip injury, but the team is not closing the door on him playing; they’ve officially listed him as questionable. Cornerback Jaylon Johnson did not practice Friday after popping up on the injury report Thursday as a limited participant due to a quad injury.

The promising sign for New Orleans is that both quarterback Jameis Winston and running back Alvin Kamara were able to practice all week, albeit on a limited basis. The fact that neither suffered a setback is encouraging that they’ll be able to go in Week 3.

Christian McCaffrey was a full participant Friday and carries no designation after an ankle injury forced him to miss Wednesday’s practice and be limited on Tuesday.

The biggest news out of Buffalo is Micah Hyde being placed on IR for a neck injury he suffered during the Monday night victory against the Titans. Hyde will miss the remainder of the 2022 season due to a herniated disc.

Buffalo’s defense will be missing a number of other key players when it takes on the Dolphins, including Poyer, Oliver and Phillips. Oliver being ruled out is a bit surprising considering he was limited throughout practice for the entire week. All the other players already ruled out didn’t hit the practice field at all. Meanwhile, Gabe Davis was limited all week and is officially questionable, but did tell reporters this week that he’s “100 percent” optimistic he’ll play.

Miami is still holding out hope that Terron Armstead will be able to play in Week 3 despite not practicing at all this week, officially listing him as questionable. When asked about it this week, head coach Mike McDaniel said “it is literally up in the air.”

The Eagles are pretty healthy heading into Week 3, listing only guard Landon Dickerson on the final injury report due to a foot injury. He did not practice with the team on Friday and is questionable.

Washington will have safety Kamren Curl when they take on the Eagles in Week 3 after dealing with a thumb injury he suffered against the Chiefs in the preseason that required surgery. He was a full participant all week. Meanwhile, Toohill and Wise did not practice all week, so their status is not too surprising.

Renfrow and Perryman were sidelined all week due to injury and did not take any positive steps Friday, so the team has ruled them out for Week 3. Every questionable player was able to practice on a limited basis on Friday, except for running back Josh Jacobs, who is dealing with an illness. He did not practice on Thursday or Friday and is not traveling with the team to Tennessee on Friday.

Taylor Lewan did not practice all week due to a knee injury, so he’ll be sidelined for Week 3. Rookie wideout Kyle Phillips was able to practice on a limited basis despite a shoulder injury, but that team is doubtful he’ll be able to play. As for Zach Cunningham, his situation will be worth monitoring this weekend as he did not practice Friday after appearing on the injury report on Thursday with a knee injury.

Wilkinson practiced with Atlanta on Wednesday, but was not present Thursday and the team has since noted he’ll be out for this game due to a personal matter. In his absence, the Falcons will look to either Colby Gossett or Chuma Edoga to take over at left guard.

Seattle will be without defensive end Shelby Harris when they take on the Falcons. Harris suffered a glute injury during last week’s loss to the 49ers. Meanwhile, if Justin Coleman is unable to play, rookie Coby Bryant is expected to work as Seattle’s nickel corner.

Rams defensive back Jordan Fuller appeared on the injury report Thursday as a hamstring injury limited him and was downgraded Friday as a nonparticipant. He is officially questionable.

After missing Wednesday’s practice due to an ankle injury he suffered in Week 2, James Conner was able to return on a limited basis both Thursday and Friday, and is officially questionable to play against the Rams. Neither Moore or Turner practiced this week so they were ruled out.

Jacksonville had been remarkably healthy all week, but did list corner Shaquill Griffin on its final injury report after he popped up on Friday with a hip injury. He is officially questionable. Outside of him, everyone else should be a full-go.

The Chargers have officially listed quarterback Justin Herbert as questionable after he suffered a fracture to his rib cartilage in Week 2. Herbert was limited on Wednesday and Thursday, but was held out of Friday’s session. The line for this game at Caesars Sportsbook fell from Chargers -7 to -3 on Friday. For Herbert, it could come down to pain tolerance and both sides determining if playing him is worth the risk. Meanwhile, Keenan Allen also didn’t practice Friday after being limited earlier in the week. Neither J.C. Jackson nor Corey Linsley practiced all week.

Bakhtiari was limited on Thursday and Friday, which is an encouraging sign that he could make his debut in Week 3. That said, coach Matt LaFleur noted that we won’t truly know his status until Sunday, so he seems like a true game-time decision. Despite being listed as questionable, rookie wideout Christian Watson did not practice on Thursday or Friday due to a hamstring injury. On a more positive note, Allen Lazard does not carry a designation after returning to practice on a limited basis on Friday after missing Thursday’s session.

Tampa Bay will be down its top two wide receivers in Week 3. Not only is Mike Evans serving a one-game suspension, but Chris Godwin has been ruled out due to a hamstring injury that kept him out last week. Tom Brady — who was listed on the injury report with a right finger injury — does not carry a designation. That said, the veteran quarterback might be playing with limited weapons; Gage, Jones and Perriman are all listed as questionable.

The major news out of San Francisco is that tight end George Kittle is set to make his 2022 debut after missing the first two games due to a groin injury. Head coach Kyle Shanahan said that Kittle will have no restrictions. As for not-so-positive news, Armstead did not practice all week due to a foot injury that officially has him listed as questionable.

Denver had a large number of players listed as questionable for Sunday, including receiver Jerry Jeudy and cornerback Patrick Surtain II. Both were able to practice on Friday with Jeudy being listed as a limited participant while Surtain practiced fully.

The Cowboys are once again without their quarterback and have a handful of other players who could miss time against the Giants. Gallup is questionable but was a full participant every day this week. Parsons, on the other hand, did not practice Thursday or Friday and was limited on Saturday with a cold.

On the other side of the ball, first-round draft pick Thibodeaux was limited in practice all week.