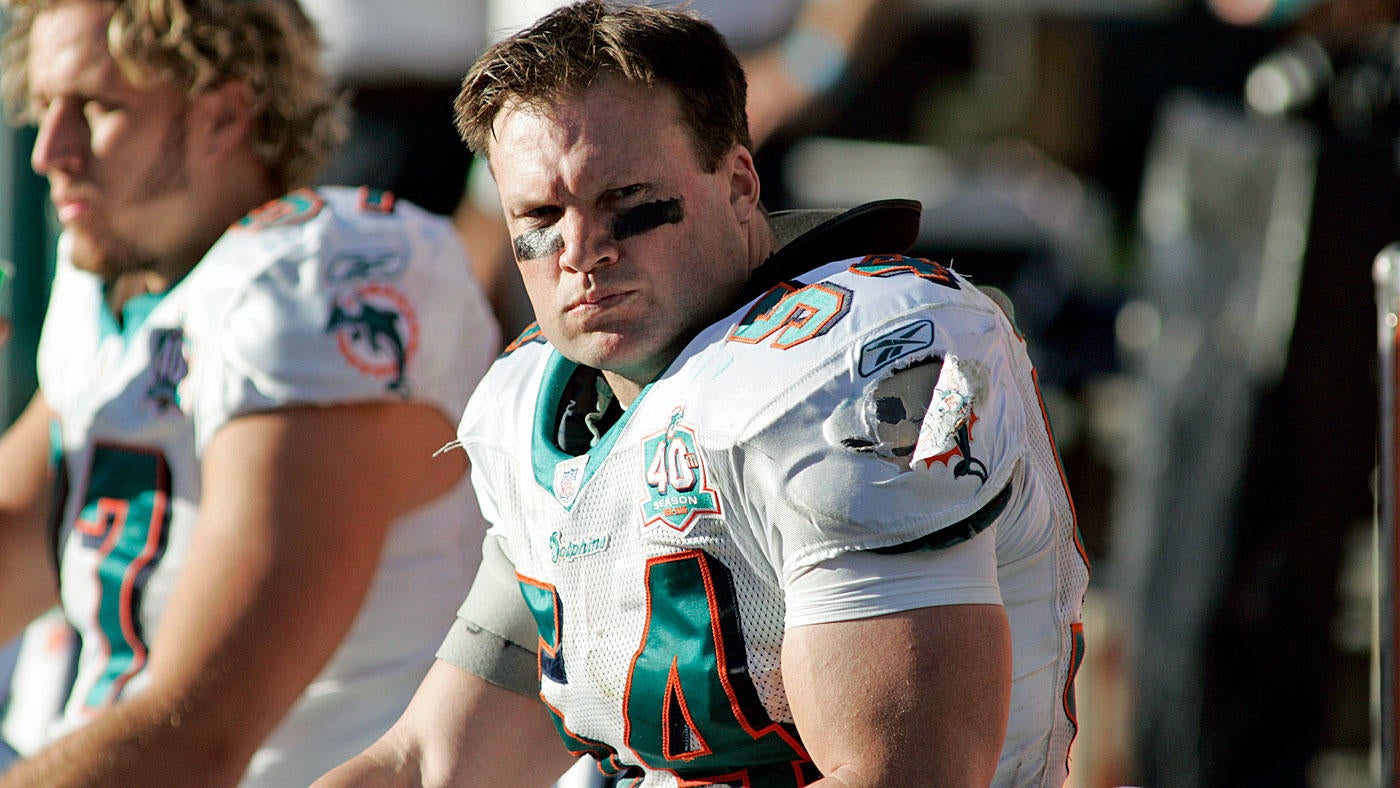 Patience would be an appropriate word to describe the 2022 Pro Football Hall of Fame induction class. Unlike most induction classes, there was not a single member of this year’s class that got in on the first ballot. Cliff Branch, who was posthumously enshrined on Saturday, had been eligible for 30 years before his family received that long-awaited phone call.

With that in mind, we decided to put together a list of the 20 best NFL players who are not in the Hall of Fame. Don’t be surprised if several of these players receive a bronze bust in Canton sometime in the near future.

Like another receiver who cracked the list, Johnson was not selected to the Hall of Fame in 2022, his first year of eligibility. It’s safe to assume that the longtime Houston Texans standout will eventually be enshrined in Canton. A seven-time Pro Bowler and two-time All-Pro, Johnson is 11th all-time in receptions and receiving yards. Johnson led the NFL in receptions and receiving yards on multiple occasions.

One of the greatest special teams players in NFL history, Tasker earned seven Pro Bowl nods from 1987-95. During that span, Tasker helped the Bills become the first franchise to appear in four consecutive Super Bowls. Tasker’s brilliance was on display during the opening minutes of Super Bowl XXVII. With the Cowboys punting from their own 16-yard line, Tasker was lined up against linebacker Robert Jones, a rookie who filled in for an injured starter. Jones didn’t have a chance against Tasker, who beat Jones on an inside move before blocking Mike Saxon’s punt. Tasker’s play set up the game’s first touchdown.

A player who was truly ahead of his time, the 6-foot-3, 215-pound Taylor was one of the first receivers to fully use his physicality to his advantage. In 1965, Taylor spurned the NFL (he was drafted by the Eagles with the 203rd pick in the NFL draft) to play for the AFL’s Kansas City Chiefs. In his second season, Taylor led the AFL in average yards per catch while helping lead the Chiefs to the first-ever Super Bowl. The AFL’s leader in touchdown catches the following season, Taylor helped the Chiefs capture their first Super Bowl win at the end of the 1969 season. His 46-yard touchdown sealed Kansas City’s 23-7 win over the Vikings, the last game ever played between the rival leagues.

Taylor’s transition to the NFL was seamless after the two leagues merged in 1970. A year after the merge, Taylor led the NFL in receiving yards while earning All-Pro honors. He earned Pro Bowl honors again in 1972 at the age of 30.

Atlanta’s first draft pick, Nobis played on just two winning teams during his 11-year tenure with the Falcons. Despite his team’s lack of success, Nobis earned the recognition of his peers, earning five Pro Bowl selections and one All-Pro nod during his first seven seasons.

Named the NFL’s Rookie of the Year in 1966 by Sporting News, Nobis recorded a whopping 294 tackles that season. That total is not only a Falcons’ franchise record, it is unofficially the the most tackles ever credited to a player in NFL history, according to the Falcons’ team website. Nobis’ early success earned him a place on the NFL’s All-Decade Team for the 1960s.

Smith’s extreme competitiveness more than made up for his 5-foot-9, 195-pound frame. A key member of the Panthers’ 2003 Super Bowl team, Smith overcame a significant injury in 2004 to win Comeback Player of the Year after lading the NFL in receptions, receiving yards and touchdown catches in 2005. Smith tallied eight 1,000-yard seasons and is one of 14 players with at least 1,000 career receptions. He’s currently eighth all-time with 14,731 career receiving yards.

One of best players on the Bears’ vaunted 46 defense, McMichael earned his first of two first-team All-Pro honors in 1985 while helping Chicago capture its only Lombardi Trophy. A two-time Pro Bowler, McMichael had 92.5 career sacks for Chicago, second in franchise history. McMichael and Dan Hampton (a 2002 Hall of Fame inductee) formed one of the greatest defensive duos in NFL history, a unit that totaled 41.5 sacks from 1984-88.

A key member of Pittsburgh’s “Steel Curtain” defense, Greenwood earned six Pro Bowl nods (and two first-team All-Pro honors) from 1973-79. A menacing pass rusher, Greenwood sacked Roger Staubach a record four times in the Steelers’ Super Bowl X victory over the Cowboys. The 6-fo-6 Greenwood also had a penchant for batting down passes; he did that on three occasions during the Steelers’ Super Bowl IX win over the Vikings.

A four-time Pro Bowler, Matthews spent 16 of his 19 NFL seasons with the Browns, helping Cleveland win five AFC Central division titles during the 1980s. Matthews retired with 69.5 career sacks, 27 forced fumbles and 14 fumble recoveries. He also led the NFL in tackles on four different occasions. One of Matthews’ best seasons did not result in a Pro Bowl selection. In 1984, Matthews led the league with 126 tackles while also posting 12 sacks and three forced fumbles. Matthews’ play was a major reason why the Browns appeared in three AFC Championship Games from 1986-89.

While he has yet to receive the call to Canton, Matthews was inducted into the Browns’ Ring of Honor in 2019.

Riley retired with 65 interceptions, which is tied for the fifth-highest total in NFL history. The player Riley is often compared to is Charles Woodson, who will receive a gold jacket this summer. An incredibly consistent player throughout his career, Riley picked off at least four passes nine different times, tallying a career-high nine interceptions in 1976. A key member of the Bengals’ 1981 AFC championship team, Riley returned a league-high three interceptions for touchdowns during his final two seasons. In 1983, his final NFL season, the 36-year-old Riley recorded eight interceptions (returning two for scores) while earning his first career All-Pro selection.

With respect to Tom Jackson and Rod Smith, Gradishar remains the greatest Bronco who is still waiting for his place in Canton. The 14th overall pick in the 1974 draft, Gradishar earned Pro Bowl and All-Pro honors in 1977 while leading Denver’s “Orange Crush” defense, a unit that helped spearhead the Broncos’ first Super Bowl appearance. Gradishar earned five more Pro Bowl selections (as well as another All-Pro nod) during his final six seasons with the Broncos. A member of the Broncos’ Ring of Fame, Gradishar is credited with over 2,000 tackles during his 10-year career.

Known during his playing days as “The Judge,” Hayes was a dominant shut down defender who earned five straight Pro Bowl nods from 1980-84. Hayes won Defensive Player of the Year in 1980 while leading the NFL with 13 interceptions. Hayes helped the Raiders win their second Super Bowl that season. Three years later, he teamed up with Hall of Fame cornerback Mike Haynes to shut down Washington’s talented receiving corps in Super Bowl XVIII. Hayes is a member of the NFL’s All-1980s Team.

The only running back on this list, Craig played an integral role in the 49ers’ success during the 1980s. A four-time Pro Bowler and member of the NFL’s All-1980s Team, Craig became the first player in league history to have 1,000 rushing and receiving yards in the same season (1985). A three-time Super Bowl champion, Craig became the first player to score three touchdowns in a Super Bowl during the 49ers’ win over the Dolphins in Super Bowl XVI.

While an injury cut his career short, Sharpe did plenty of damage during his seven-year career. A five-time Pro Bowler and three-time All-Pro, Sharp led the league in receptions three different times. He also led the NFL in touchdown receptions on two separate occasions. In 1992, Brett Favre’s first season as the Packers’ starting quarterback, Sharpe led the NFL in receptions (108), yards (1,461) and touchdowns (13).

A six-time Pro Bowler from 2006-10 and in 2012, Wayne led the NFL in receiving yards in 2007. His 53-yard touchdown catch during the previous year’s Super Bowl helped the Colts win the franchise’s first Super Bowl following their move from Baltimore to Indianapolis. Wayne was Peyton Manning’s No. 1 receiver when the Colts made it back to the Super Bowl in 2009. And despite Manning’s departure in 2012, a 34-year-old Wayne earned Pro Bowl honors that season while catching passes from a rookie quarterback named Andrew Luck.

The Bengals’ all-time leading passer, Anderson’s boom under Bill Walsh’s “West Coast” offense set the stage for Walsh’s success with Joe Montana in San Francisco. A four-time Pro Bowler, Anderson led the NFL in completion percentage three times. He also led the NFL in passing yards in consecutive seasons. In 1981, Anderson won both league MVP and Comeback Player of the Year while leading the Bengals to their first Super Bowl.

A seven-time Pro Bowler and member of the NFL’s All-2000s Team, Holt played an integral role on the Rams’ 1999 championship team. The league’s leading receiver on two separate occasions, Holt was the Rams’ No. 1 receiver when St. Louis made a return trip to the Super Bowl in 2001.

The Dolphins have a slew of Canton-worthy players who still haven’t gotten the call. Among those players are former offensive lineman Bob Kuechenberg, receivers Mark Duper and Mark Clayton and running back Ricky Williams. Thomas, a seven-time Pro Bowler and five-time All-Pro, is at the top of that list. A former fifth-round pick, Thomas was one of the NFL’s most productive players during his dozen seasons in Miami. Thomas, who led the NFL in tackles on two separate occasions, retired with 1,734 career tackles, 20.5 sacks, 17 interceptions, 48 passes defensed, 16 forced fumbles and eight fumble recoveries. His play helped the Dolphins make the playoffs each year from 1997-01.