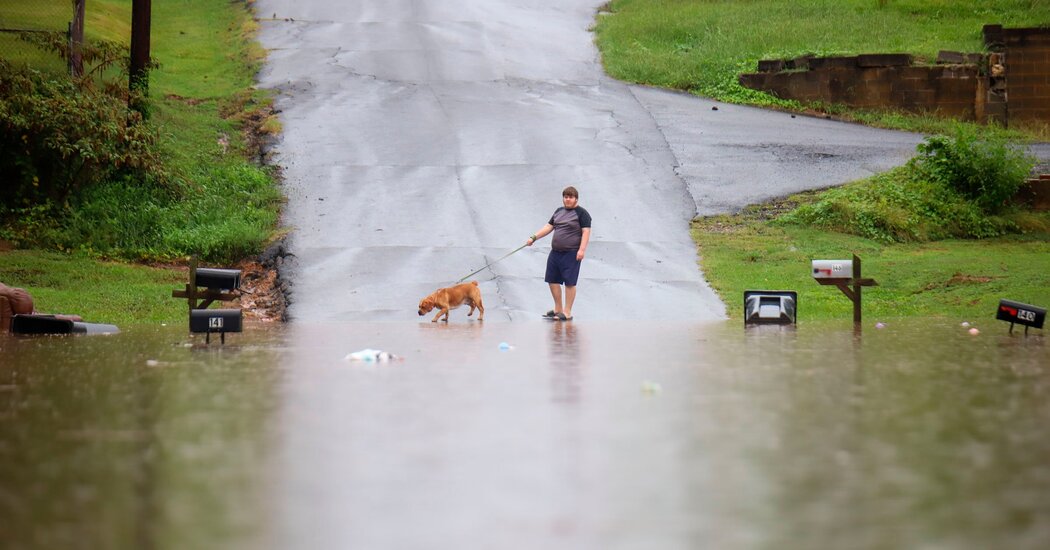 Parts of Georgia remained under a flood watch after heavy rainfall on Sunday that was expected to continue in some areas, but the storms’ damages had yet to be fully assessed.

Gov. Brian Kemp of Georgia declared a state of emergency in two counties on Sunday after a string of heavy thunderstorms flooded roadways, knocked down trees and submerged homes. The flood watch, covering north central, northeast, northwest and west central parts of the state, was set to expire at 8 p.m. on Monday.

The counties, Chattooga and Floyd, about 90 and 70 miles northwest of Atlanta, received an estimated 12 inches of rain, according to the executive order, which directs state resources in “preparation, response, and recovery activities” in affected areas.

Homes and cars were flooded on Sunday in the Summerville area, which is about 80 miles northwest of Atlanta, said Carmen Hernandez, a National Weather Service meteorologist in Atlanta. The service did not have estimates of how many structures or people were affected as of Monday afternoon.

The service had not received reports of any deaths connected to the storms, she said.

Excessive rainfall could cause the swelling of rivers, creeks and streams, which “may rise out of their banks,” the National Weather Service said on Monday afternoon. Showers redeveloped early Monday afternoon with rain chances projected to increase throughout the day.

“Those living in areas prone to flooding should be prepared to take action should flooding develop,” the service said.

Most areas within the watch area had already received 1 to 4 inches of rainfall by Monday afternoon, with another 1 to 3 expected by the evening, the Weather Service said.

The National Weather Service had issued a “particularly dangerous situation” advisory early Sunday before raising the alert to a flash flood warning. There were no immediate reports of deaths or injuries.

By Sunday afternoon, the Weather Service in Atlanta had advised against nonemergency travel. “Please prepare for the worst,” meteorologists said. “Do not sightsee or attempt to save property. Stay or get to a safe place!”

Flooding is a complex phenomenon with many causes, including land development and ground conditions. While linking climate change to a single flood event requires extensive scientific analysis, climate change, which is already causing heavier rainfall in many storms, is an increasingly important part of the mix.

Because of flash flooding at the Raccoon Creek Filter plant, the city of Summerville urged residents to boil all water before drinking, cooking or preparing baby food, adding that the water should be boiled for at least one minute. Residents should continue boiling all water unless notified by city officials.

One Chattooga County resident, Gail Burts, told WSB-TV, an Atlanta television station, that she hadn’t expected it to rain or flood like it did. Ms. Burts said she was trapped in her home because road conditions were so poor. “We had a lot of heavy rains, and we’ve had some flooding before, but not like this,” she said.