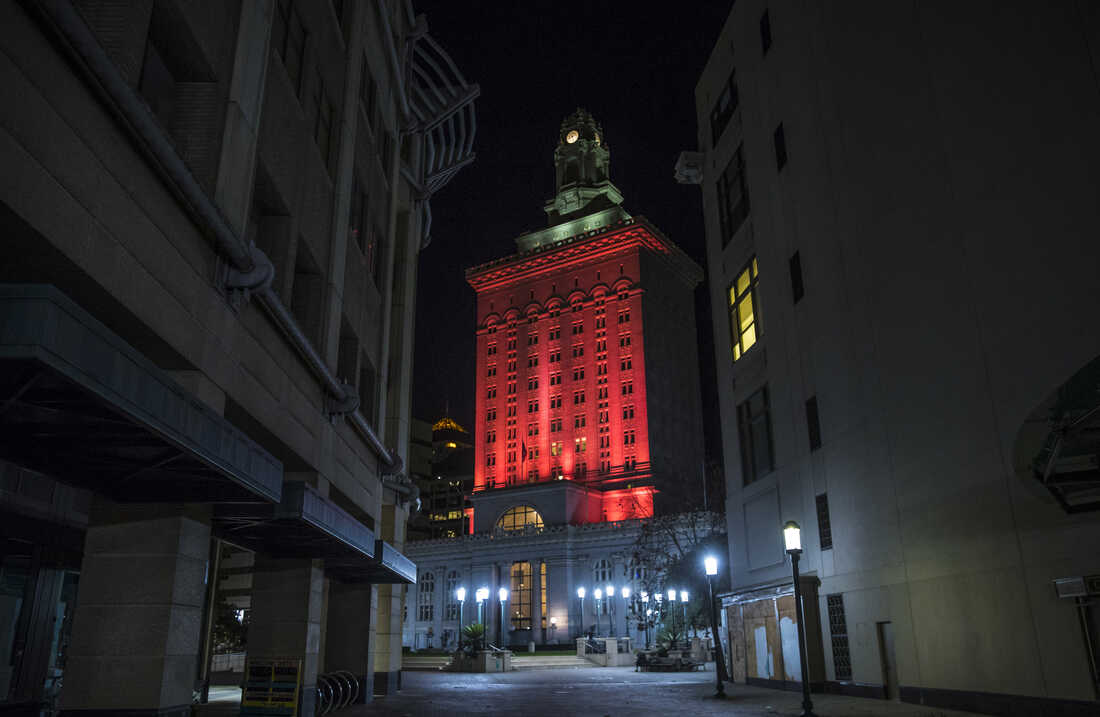 Oakland City Hall is bathed in red light in a memorial to the people who have died from COVID-19 throughout the country in Oakland, Calif. in January 2021.

Oakland City Hall is bathed in red light in a memorial to the people who have died from COVID-19 throughout the country in Oakland, Calif. in January 2021.

Oakland has declared a new public health crisis in the California town: racism.

Last week, members of the Oakland City Council voted without opposition to declare the public health crisis and vow to work on studies and actions that advance racial equity.

“Just because we’re supposed to be progressive or whatever, doesn’t mean that we don’t have a history of disenfranchisement, of systemic racism, that is embedded in our city services and our culture,” Councilmember Carroll Fife said during the Tuesday council meeting.

The resolution also sets aside as much as $350,000 in the city budget for a data analyst and consulting services to support the government as it works on “necessary improvements in systems for collecting and processing data to track performance and equity progress.”

Darlene Flynn, executive director of the city’s department of race and equity, said in an interview with television station KRON 4 that the COVID-19 pandemic made racial disparities in Oakland and around the country more visible.

“It also tends to exacerbate the impacts on communities that are already stressed by racial inequities, and we’ve seen this in other disasters as well, like Hurricane Katrina,” Flynn said. “Whenever a big stressor hits a community, it really highlights what the underlying conditions have been for a long time.”

Other cities have taken similar steps. In the summer of 2020, then-Boston Mayor Marty Walsh declared racism a public health crisis and reallocated $3 million from the city’s police department to public health.

According to an agenda report from Flynn and other city officials, Oakland residents of color tend to face poorer health outcomes than their white peers.

People who live in the North Oakland hills – a historically white neighborhood – live on average 14 to 15 years longer than residents of historically Black and Latinx neighborhoods in West Oakland and the East Oakland flatlands, the report said.

“Similar disparities between Black Oaklanders and their white peers can be observed in preventable hospitalizations, rates of diabetes, asthma, hypertension, and heart disease, death rates due to opioid overdose, babies born with very low birth weight, infant mortality, and beyond,” officials added.

Mike Magee’s Advice to the AMA on Reversal of Roe vs. Wade – The Health Care Blog

Aetna drops prior authorization for most cataract surgeries