Obama tells Democrats: Don’t give up on politics 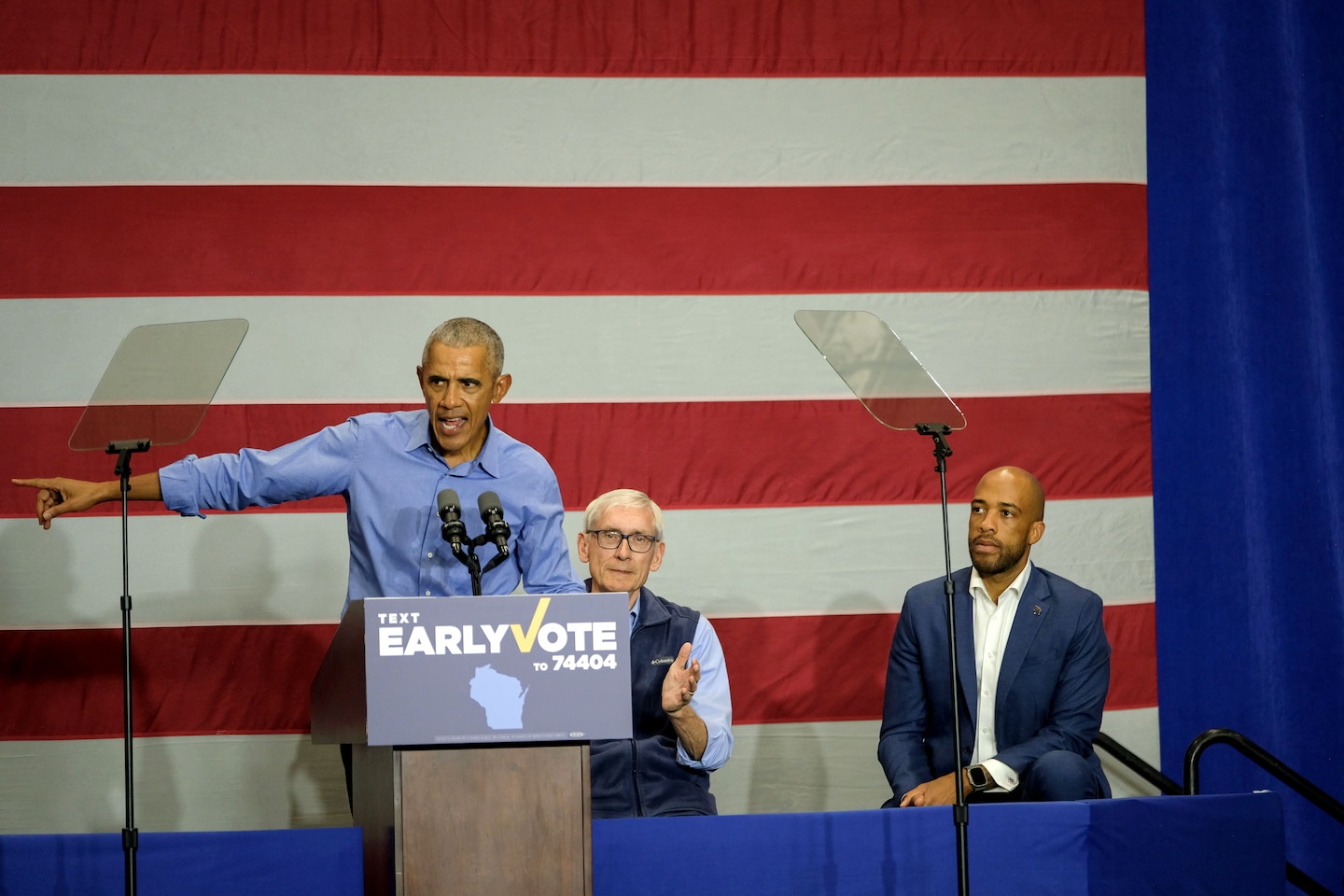 Welcome to The Daily 202! Tell your friends to sign up here. On this day in 2005, President George W. Bush nominated Judge Samuel Alito to the Supreme Court.

Obama tells Democrats: Don’t give up on politics

It’s no surprise former president Barack Obama sharply attacks Republicans as he stumps in battleground states barely a week before the midterm elections. Of course he does. Democrats want Nov. 8 to be a contest of contrasts, not a referendum on President Biden.

It’s no surprise Obama’s stump speech touches on inflation, crime, the Supreme Court decision overturning Roe v. Wade and the prospects for more conservative rulings. Of course it does — stump speeches can be a way to get talking points on major issues to your supporters.

“I get why people are anxious. I get why you might be worried. I understand why it might be tempting sometimes just to tune out, to watch football or Dancing with the Stars,” he said in Georgia. “But I’m here to tell you that tuning out is not an option. Despair is not an option.”

“I’m here to tell you that tuning out is not enough. Moping is not enough,” he said in Michigan. “We don’t have time to mope.”

“If you’re scared, if you’re anxious, if you’re frustrated, don’t complain. Don’t boo. Don’t tune out. Don’t get distracted. Don’t get bamboozled. Don’t fall for the okey-doke that says nothing you say or do matters. You go out and what?” he asked. “Vote” was the answer.

About more than the usual ennui

Here’s Obama in Wisconsin: “I understand why you might sometimes just want to tune out, just watch football or HGTV, or the Great British Baking Show, which is a cute show.” But “things won’t be okay on their own. We have to fight for it.”

In some ways, this is a variation on get-out-the-vote messages that are as old as politics. Obama’s much (much, much) repeated “don’t boo — vote!” certainly fits the bill.

Obama spokesman Eric Schultz told The Daily 202 Obama’s “tuning-out riff” aims to counteract the “natural tendency to get frustrated and angry” and deciding “to opt out.”

Still feels different somehow, as though it weren’t just about trying to overcome traditional Democratic ennui in midterm elections but something more.

The former president is, in some ways, paying President Biden back for his campaign work as vice president in the 2010 midterm elections. One Politico headline from October of that year summed up the situation: “Biden boldly goes where Obama can’t.”

My colleague Annie Linskey tracked Obama’s campaigning in a piece that ran over the weekend.

“The former president is regarded as the Democratic Party’s top communicator to base voters, more in demand than President Biden, who has not been the sought-after surrogate in the top races amid a dismal approval rating. The president spent one of the busiest campaign weekends of the cycle at his home in Delaware, where he attended his granddaughter’s field hockey game and, separately, cast his ballot.”

“Democratic strategists say Obama is the sole party leader able to draw major base-motivating crowds without simultaneously angering the other side.”

Annie quoted David Axelrod, Obama’s chief strategist in the White House, as saying the former president “has the ability to talk at the same time to base Dems the party needs to mobilize and suburban swing voters they need to persuade in these closing days.”

As The Daily 202 noted in a previous look at Obama’s 2022 campaigning:

“Obama comes to the table with some personal midterm baggage. The GOP picked up 64 seats in the 2010 midterm elections — the largest swing since 1948.”

Obama will be campaigning in Las Vegas on Tuesday, and in Phoenix on Wednesday. On Saturday, both he and Biden will stump in Philadelphia for Pennsylvania Democrats.

And then the voters will decide.

“New York Times-Siena College polling from four battleground states — Arizona, Pennsylvania, Georgia and Nevada — shows tight Senate races with just over a week left before Election Day. With an evenly divided Senate, the outcome of any of these races could tip the balance of power in the chamber,” John Wagner reports.

“The criminal tax fraud trial against the Trump Organization is set for opening statements Monday, with prosecutors looking to prove allegations that the company for years provided untaxed compensation for executives,” Shayna Jacobs reports.

“[Ketanji Brown] Jackson’s confirmation means the Supreme Court is now more diverse along racial and gender lines than ever before, with four female justices, two Black justices and one Latina justice. The elite group of lawyers who argue before the justices, however, remains mostly White and male,” Theodoric Meyer and Tobi Raji report.

“Black and Hispanic attorneys are starkly underrepresented among Supreme Court litigators, according to a Washington Post analysis of lawyers who have delivered oral arguments in recent years. Women are also significantly underrepresented. And there are particularly few women of color.”

“The economy runs like a machine. Right now, it’s overheating: Inflation levels are at the highest in decades, with prices climbing on everything from groceries to cars to rent. And the job market is unsustainably tight, with nearly twice as many open jobs as people looking for work,” Rachel Siegel and Emily Wright explain.

Pelosi, vilified by Republicans for years, is a top target of threats

“For the better part of two decades, Republicans have targeted Ms. Pelosi, the most powerful woman in American politics, as the most sinister Democratic villain of all, making her the evil star of their advertisements and fund-raising appeals in hopes of animating their core supporters. The language and images have helped to fuel the flames of anger at Ms. Pelosi on the right, fanned increasingly in recent years by a toxic stew of conspiracy theories and misinformation that has thrived on the internet and social media, with little pushback from elected Republicans,” the New York Times’ Annie Karni, Catie Edmondson and Carl Hulse report.

The man in the MAGA middle: Kevin McCarthy’s campaign to be Speaker means no enemies to the right, left, or center in his caucus.

“The last time there was a Republican House and a Democratic president, Washington was paralyzed with a constant series of showdowns over whether to keep the federal government open and the U.S. Treasury from defaulting on its debts,” New York Magazine’s Ben Jacobs writes.

“At the time, McCarthy served as the House Republican whip, tasked to count votes and keep members in line.  In 2011, Republican opposition to raising the debt ceiling (the government’s borrowing limit) in exchange for major cuts in federal spending led to Standard & Poor’s downgrading the U.S. government credit rating for the first time ever.  Will Republicans do it again?”

“A phone call between the two leaders in June played out differently from previous ones, according to four people familiar with the call. Biden had barely finished telling Zelenskyy he’d just greenlighted another $1 billion in U.S. military assistance for Ukraine when Zelenskyy started listing all the additional help he needed and wasn’t getting,” NBC News’ Carol E. Lee, Courtney Kube and Dan De Luce report.

“Biden lost his temper, the people familiar with the call said. The American people were being quite generous, and his administration and the U.S. military were working hard to help Ukraine, he said, raising his voice, and Zelenskyy could show a little more gratitude.”

“Of the 14 states with some of the most competitive Senate and governor races, based on ratings from the Cook Political Report, Mr. Biden has visited six since Sept. 1. He hasn’t been to Arizona, Nevada or Georgia, three states with high-profile midterm races that also helped put him in the White House,” the Wall Street Journal’s Ken Thomas and Catherine Lucey report.

“Biden takes pride in having built rapport with Xi since first meeting him more than a decade ago, when they served as their countries’ vice presidents. But Biden now faces, in Xi, a counterpart buoyed by a greater measure of power and determined to cement China’s superpower status even while navigating strong economic and diplomatic headwinds,” the Associated Press’ Aamer Madhani reports.

“This year, Itaewon’s Halloween turned to horror. As huge crowds pushed into the neighborhood to celebrate, there was a crush. More than 150 people were killed and about 82 injured, according to fire department officials,” Joyce Sohyun Lee, Samuel Oakford, Adam Taylor and Tim Meko report.

Democrats attack GOP over entitlements, with abortion leaving some unmoved

“Democrats are shifting some ad resources away from abortion while party leaders, candidates and allied groups increasingly tag Republicans as ‘extremists’ on economic issues. They are focusing more intensely on entitlement programs and other benefits as Republicans knock them on inflation,” Hannah Knowles reports.

“While Democrats still put abortion at the forefront of their campaign and Republicans continue to hammer them over rising prices, the strategies reflect a belief in both parties near the end of the campaign that other issues could factor heavily into tight races with dwindling pools of undecided voters.”

“Republicans are pouring cash into House districts that voted for President Biden by as much as 20 points, targeting under-the-radar battlegrounds amid growing signs of a red wave,” Axios’ Andrew Solender reports.

“Why it matters: Infusions of funding by both parties into these solidly blue seats signal the potential for a Republican landslide, further complicating the Democratic calculus on which races to defend.”

At 5:15 p.m., the Bidens will host children of “firefighters, nurses, police officers, and members of the National Guard at the White House for trick-or-treating.”

The return of David S. Pumpkins

“Perhaps you’d forgotten one of TV’s most disturbing and frightening characters, who made a chilling return Saturday night. Yes, David S. Pumpkins came back from the, um, dead, or maybe vacation or something? Who really knows with him? That’s kind of the whole point,” Travis M. Andrews explains.

Breaking: “We do learn a tantalizing fact about the mysterious David S. Pumpkins. No, not what the ‘S’ stands for, but that’s he’s from Ibiza, the Spanish island resort.”

Thanks for reading. See you tomorrow.