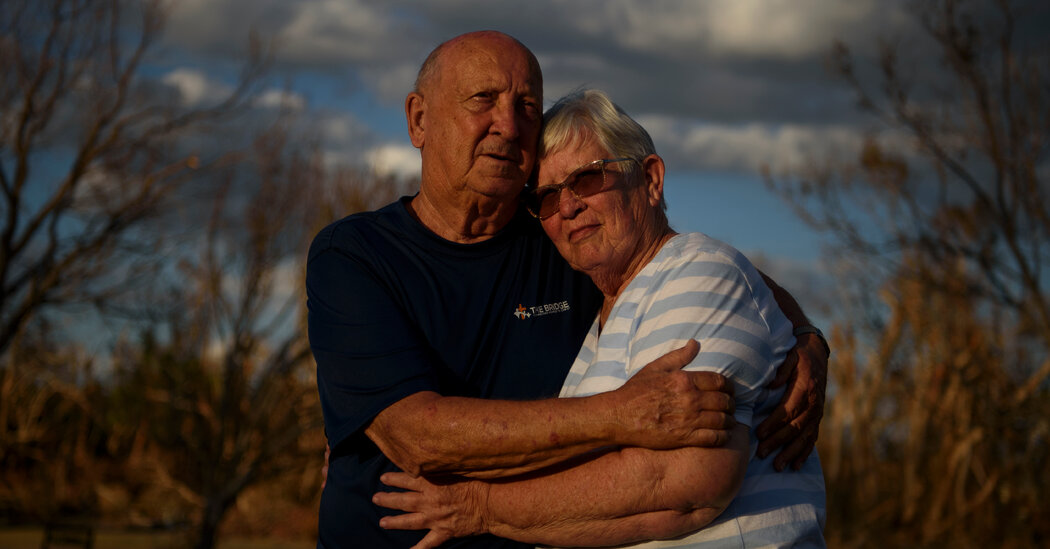 FORT MYERS, Fla. — More than two decades ago, Jane and Del Compton stumbled upon Fort Myers while on vacation in southwest Florida. This was where they would retire, they decided on the spot, in a place where they could grow old in peace and sunshine.

They bought a double lot with a mobile home and a few small luxuries: a fan with a remote and his-and-hers televisions so she could follow her soap operas and he could watch cowboy shows.

But Hurricane Ian ravaged their piece of paradise, soaking the photos from four decades of marriage, destroying their car and leaving them without a place to live. They had no homeowner’s insurance; their policy was canceled in June because of the age of their home, a 1978 model.

Now the Comptons — she at 77, he at 81 — are resigned to abandoning their retirement dream. They will return to their native Louisville, Ky., in the coming weeks to stay with their daughter and figure out their next steps, though they are loath to leave their beloved church community and friends. Spending their twilight years in Florida seems suddenly out of reach.

Official tallies of deaths related to the storm suggest that older Americans died in disproportionate numbers: Of the 87 victims (out of 123 overall in the United States) for whom an age or approximate age has been released, 61 of them were at least 60 years old. Many victims were found dead at their homes. But Ian not only killed more older people; it also created uniquely wrenching situations for those who survived.

Even if they can afford to rebuild, those people may not have the time or energy required for such a difficult task and the prospect of tighter building codes might make that more expensive than ever. Many, like the Comptons, live on fixed incomes, lack flood insurance or purchased their homes before the housing boom of the last decade, when the region was far more affordable. Recapturing their paradise may not be possible — a cruel and abrupt blow.

In interviews, several residents said they had defiantly ridden out the storm in the homes they had poured their savings into, partly to ensure they could easily begin cleaning up the damage.

Richard Hoyle, 75, moved with his wife to Pine Island, near Fort Myers, in December, after she asked to move to the region from the mountains of Tennessee. He had insisted that they stay through the hurricane, but the storm surge lapped the second flight of stairs to their home, and they watched boats fly across the canal in winds that topped 150 miles per hour.

“We’d already decided, this is our retirement home, and we’ll stay and fight for it,” said Mr. Hoyle, a former Marine and firefighter. “I’m glad that we stayed — some battles are worth fighting.”

Likewise, Garland Roach, 79, said he had no intention of leaving his badly damaged home in a modest neighborhood of North Fort Myers, where the lone palm tree in his front yard was now surrounded by drain pipes, siding and other debris.

“My daughter wants me to come back to Ohio, and I told her I would in my ashes,” he said, adding that he was hoping the Federal Emergency Management Agency or the National Guard would provide a tarp for his mangled roof. “I couldn’t last another winter up there with my arthritis.”

Two deaths from the storm, Florida officials said, were men in their 70s who shot themselves after seeing the destruction to their property.

“I think it’s a breaking point for a lot of people,” said Carol Freeman, 75, pausing as she cleaned the muddied floor of her home on Pine Island, which was ravaged by the storm.

Since the hurricane, Ms. Freeman, a retired postal worker who lives with her parrot, Jose, had been without power, forced to use baby wipes to keep clean and, at least once, eat a donated military-style meal for dinner. She had spent days debating whether it was worth staying.

It may be time, she said, to return to her native Chicago after about four decades on the island. “Too old to be doing this,” she said.

Some retirees who wintered on the Gulf Coast are already planning their exits from the state.

In Fort Myers Beach, an island town that attracted tourists and Midwestern snowbirds, entire groups of friends were gathering recently to inspect the wreckage — and to start mourning the end of their Florida lives. At Gulf Cove, a mobile home community near the base of a bridge, residents were trying to salvage belongings from their ruined properties. Some said that they expected that the patch of waterfront land where they had cultivated tight-knit friendships over the years would be sold to developers and razed.

“Even if something miraculous happened that we could get back together, there are a lot of couples in their 80s or 90s,” said one of the residents, Deb Macer, 69. “They’re just not going to come back.”

Before the hurricane, days in their neighborhood had a familiar, comforting rhythm. The retirees who lived there planned coffee hours and daily walks over the bridge to Estero Island. Ms. Macer planned crafting get-togethers and her husband, Stacy, 70, was known as the community handyman.

Cindy and Steve Duello had barely begun fulfilling their dream of retiring here. Frequent walks and bike rides around Fort Myers Beach had kept them feeling vibrant and healthy well into their 60s. They fussed over their orchids, mingled with neighbors and taught their grandchildren to scour the beach for prized heart-shaped rocks.

At the center of it all was a modest two-bedroom house on Albatross Street, the gathering place since the 1980s for four generations of Duellos.

Ian left much of Fort Myers Beach a flattened, unrecognizable ruin, and the Duello house saturated with seawater. Days after the storm, the Duellos made their way to the island, saw their destroyed home and realized that the town could not be rebuilt in time for them to enjoy it again.

“It won’t return in our lifetime,” Ms. Duello said, through tears. “I can feel this has already aged me.”

For some older Floridians, the storm created a world with no good options: They could not imagine leaving the state at this stage of their lives, yet their homes were gone, perhaps forever.

In Naples, about 40 miles south of Fort Myers, the River Park neighborhood was a scene of despair on Thursday. Workers and homeowners were lugging soaked items out of homes, building giant heaps of debris on the curb.

Rosalie Bulger, 73, was in her living room, surveying what was left of the stucco one-story house where she had lived for 35 years. The smell of mold and rot was overpowering.

“I am numb,” she said as workers wearing N95 masks moved her belongings into the driveway: glassware, decorative pots, a rack of brightly colored dresses.

Ms. Bulger was enjoying a life with the comforts of family close by: Her daughter and son-in-law lived in the bungalow next door. As she looked around at her ruined belongings, she said she would depend on God to help her figure out what to do next, though she could not imagine how long it would take — if ever — for her house to be habitable again.

“I’m not going,” she said of the notion that she would join relatives or friends in another state. “But we can’t live here anymore, either.”

After her husband died last year on Mother’s Day, Linda Stevens, 75, decided to live permanently on Pine Island, which had offered many people a far more affordable sanctuary than the wealthier homes on nearby Sanibel Island. She and her husband had traded the harsh winters of Maine for days by the water on the island’s northern end. She loved their new life: the friends from church, the volunteering, the lush scenery.

Ian was Ms. Stevens’s first hurricane, sending her huddling with neighbors after the traffic jam of evacuees deterred her from leaving the island. They cared for her, making sure she was fed and able to safely leave after days without power and running water.

Now, she is debating selling her house altogether or returning to the snowbird lifestyle, moving closer to one of her daughters and spending only the winter months in the area.

But for the time being, she said, “I can’t make that decision. I’m still grieving.”

If you are having thoughts of suicide, call the National Suicide Prevention Lifeline at 1-800-273-8255 (TALK) or go to SpeakingOfSuicide.com/resources for a list of additional resources.