On Uvalde’s Day of the Dead, a Night to Remember 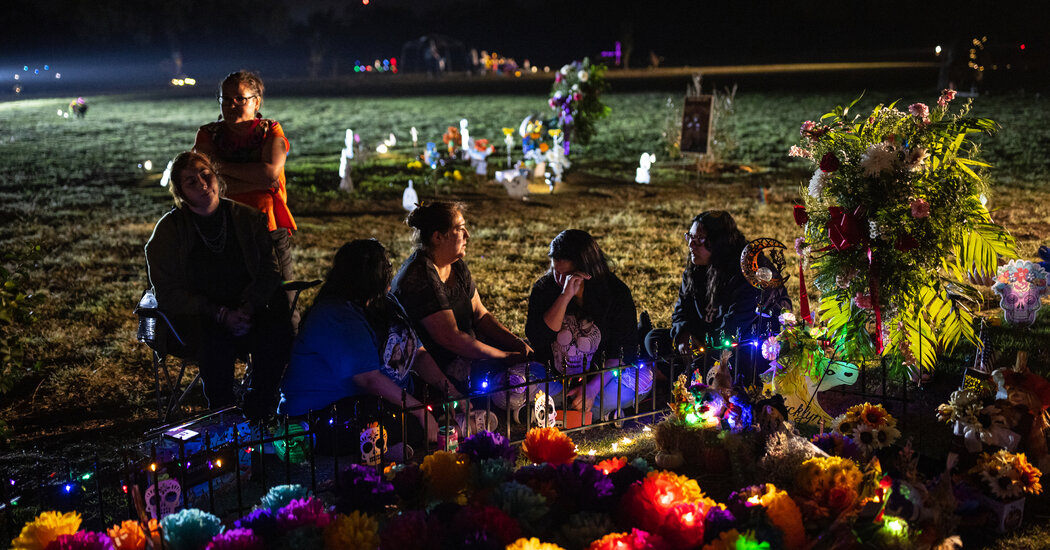 UVALDE, Texas — As the sun painted a dark orange hue over the cemetery in Uvalde on Wednesday evening, a few hundred residents filed quietly past the burial plots of the 19 children and two teachers whose lives had come to so abrupt an end this year at Robb Elementary School.

The graves were decorated with ofrendas — personal belongings, old photos and favorite foods placed on makeshift altars to mark the traditional Day of the Dead.

Many people carried oversized photos of the children or wore images of them emblazoned on their T-shirts. On this march, unlike so many in the small South Texas city over the past few months, there were no cries for justice, no demands for gun control and no anger. This night of Día de los Muertos, as it is known in Spanish, was for a celebration of short, bright lives taken too soon.

Among the mourners was Ana Rodriguez, who had fashioned an altar for her 10-year-old daughter, Maite, out of those things she had left of her: A small sewing machine that Maite had used to stitch pillows for her family. A winter hat. The green Converse tennis shoes she had worn to school that last day in May. And an urn of ashes.

“I chose these items because they represent who she was,” Ms. Rodriguez said. “In a way, she is here with us.”

The Day of the Dead — a folkloric holiday dating back to precolonial times that is celebrated across Latin America, and among Latino communities in the United States — takes place on the first two days of November. The belief is that the souls of the dead visit the land of the living and, at the carefully prepared altars, reminisce about lives that are no more.

In the five months since the mass shooting, family members of the victims have channeled their grief into activism, by organizing marches and packing public meetings to demand stricter gun laws and accountability for the slow response from the police.

But unlike the previous events, this day served as a source of comfort, bringing families together with lifted spirits.

As the sun set, sparking lights illuminated the altars, bringing a sense of festivity. A mariachi band, Nuevo Estilo, belted the traditional song “Hermoso Cariño” by Vicente Fernandez: “Beautiful darling that God has sent me, to be destined for no one else but me.”

The Day of the Dead has traditionally been a private affair in Uvalde, a close-knit, largely Mexican American community some 70 miles from the border with Mexico. Usually depicted by décor some may consider macabre, candies and figures in the shape of skeletons and skulls, the two-day commemoration carries a deeper, solemn meaning, a moment to pause and commune with the departed, said Monica Muñoz Martinez, a University of Texas professor who attended Robb Elementary while growing up in Uvalde.

On a recent day, Ms. Martinez and her mother, Maria Elena Martinez, 69, carefully placed toys and personal items on a Day of the Dead altar for the Uvalde victims that was tucked in a wing of the university next to the Mexican American and Latino Studies office.

“The goal is to keep their future visions alive,” Ms. Martinez said.

Wednesday’s march at the cemetery in Uvalde included a visit from Beto O’Rourke, the Democratic candidate for governor of Texas, and Roland Gutierrez, a state senator who represents the area.

Jerry Mata, Tess’s father, collapsed at one point on a beach chair, overcome with emotion. Later, he said he could not help but feel gratitude as onlookers stopped by to take photos of his daughter’s altar.

“I’m happy that they are not forgetting about her,” he said over the sounds of jovial chatter and mariachi trumpets. “You just don’t think that you are going to be doing this for your daughter in the fourth grade. She was not supposed to die. But the goal today is to remember the good times.”

Ms. Rodriguez, who also grew up in Uvalde, said that despite the name of the holiday she had mustered all of her strength to spend it remembering her daughter’s short but eventful life, not the way she died.

Maite, she said, had been an unexpected surprise. With two boys already, Ms. Rodriguez said she had been taken off guard when she learned that she was having a girl. “I was used to boys. I didn’t know how to do a girl’s hair, or how to match their outfits. I didn’t know any of that,” she said.

She hadn’t even thought of a name for her when Maite was born. “I was actually scared I was going to walk out of the hospital with a nameless baby,” she said with a giggle. Then, she said, a friend stopped to visit at the hospital and called out to her own daughter, whose middle name was Maite.

“Yes, of course, I would be honored,” the friend replied.

When Maite and Ms. Rodriguez looked up the meaning of the name years later, both were surprised to learn that it meant “beloved” and “love” in Basque. “She would always tell me, ‘Mom, nobody really has my name.’”

Unlike her boys, who tended to be more independent, Maite was glued to her, she said, as soon as she could walk. As she was putting herself through nursing school, Ms. Rodriguez said, she would study late into the night, and Maite would curl up on the floor next to her. “She always wanted to be next to me,” she whispered.

In preparing an altar for her daughter, Ms. Rodriguez said, she left out one of Maite’s favorite books, Anne Frank’s “Diary of a Young Girl,” an account of the last months of a Jewish girl hiding with her family during the Nazi occupation. Among the items the school returned to her after the shooting was a letter Maite had written about Anne’s tragic death.

The book, Ms. Rodriguez said, was just too painful to include.

The Day of the Dead celebration was one of several times that Uvalde families have come together to comfort one another in recent weeks, sharing the first day of school for surviving children, preparing for the upcoming holidays with the empty chairs, celebrating birthdays for children who were not there to blow out the candles.

Ms. Rodriguez had gathered with the Rubio family at the cemetery a few days earlier to mark the day when Lexi Rubio would have turned 11. They played festive music on a portable speaker as Lexi’s siblings drew funny faces on small pumpkins.

Somewhere along the way, a balloon with an image of a sloth from one of Lexi’s favorite movies, “Zootopia,” broke free and floated toward the clouds.

“Lexi wanted it,” her mother, Kimberly Rubio, murmured. “So she’s taking it.”

The moment inspired Ms. Rodriguez to share news of her own. She jumped up from a beach chair and pulled her hair to the side to reveal a tattoo on her neck with a single word: “Maite.”

“It didn’t hurt at all,” she said with a grin. “I actually felt a pep in my step after I got it. Like Maite is now with me forever.”