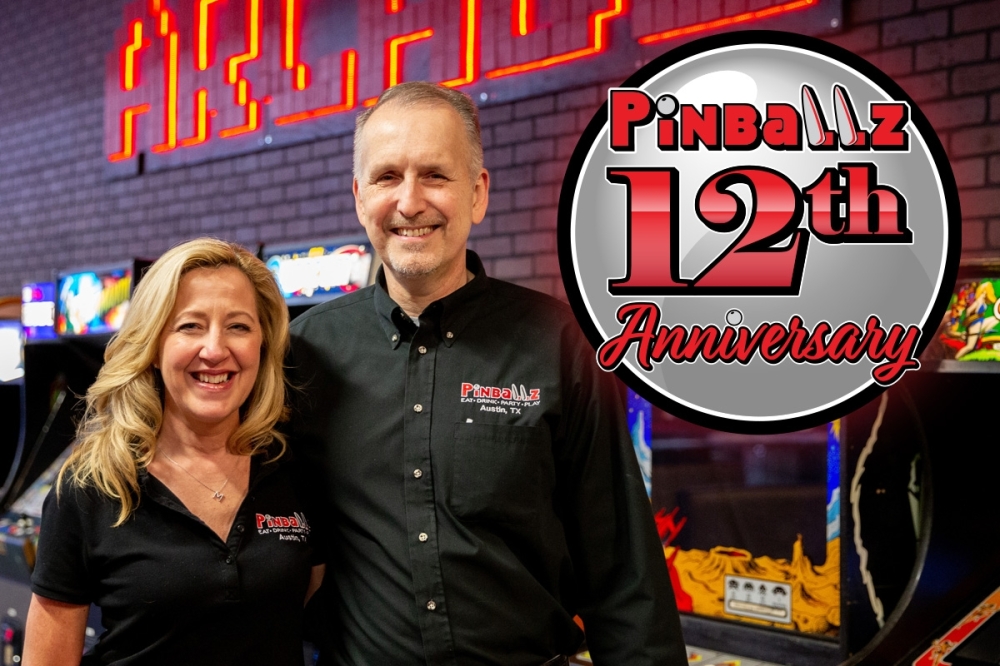 Many locals believe that the “Old Austin” is dead and gone, but certain spots in the city remain where Austin’s vibrancy, entrepreneurial spirit and weirdness still feel alive and well—one being the entertainment venue and arcade Pinballz.

Back in 2010—when shopping malls and arcades were closing at a rapid rate—Pinballz owners and husband-and-wife duo Darren and Mikki Spohn were told their business model would never work. Still, the Spohns knew they could bring something special to the city and will celebrate the 12th anniversary of Pinballz this year on Nov. 20.

“We wanted to bring something really cool to Austin, something that they didn’t really have here,” Darren Spohn said. “We really felt like we could do two things. One is we can bring a cool, arcade-themed entertainment venue for all ages here to Austin—and also put our kids to work and teach them how to work for a living.”

Setting out to launch their first venue, the couple began frequenting auctions to buy their own arcade games and pinball machines. Eventually, they acquired enough games to open the original Pinballz location at 8940 Research Blvd., Austin.

“We started the business using profits from Darren’s tech companies. True, everyone thought we were crazy to open the original arcade—but Austin was the perfect place and we received lots of local support from our customers,” Mikki said. “We wanted to bring people of all ages together where the cell phones were put away and families and friends became more social, just like when we grew up in the 80s.”

The original location is an indoor, 12,000-square-foot space packed to the brim with arcade games and pinball machines. Patrons can bring their own beer, trade in tickets for exciting prizes, and attend special events like tournaments and murder mystery parties.

“It’s so Austin – when we opened the original location you would see guys and ladies get off work, dressed in suits coming in to play pinball, and then a guy with a mohawk playing next to them. You got the downtown guy, the college student—people of all ages and walks of life all mixed together because pinball is a cross-generational sport,” Darren said. “… There’s this really clique-y, cool, unique kind of thing that we have at the original arcade. That kind of the old Austin feel, that vibe.”

As the Pinballz community grew in Austin, Darren and Mikki decided to bring the magic of Pinballz to Buda, this time with a new indoor-outdoor concept in mind called Pinballz Kingdom.

“We’re like a theme park you go to that you don’t have to leave, where you can eat, you can drink, have your party, and play all kinds of games and attractions… it’s the ultimate entertainment experience – and we’re cost effective,” Darren said.

Located on a 13-acre property at 15201 S. I-35, Pinballz Kingdom features ample indoor and outdoor space for virtual reality games, a stage for live music performances, a beer garden, darts, cornhole, and outdoor rides—as well as all of the elements of the original location – food, drinks, games, and attractions.

“With outdoor music and laser tag, we brought more experiences and had 13 acres to expand our business,” Mikki said. “Buda was a small town back when we first opened, but the expansion of hotels, apartment complexes and developments seemed to blow up over the past few years. There’s so much more we plan to do with that location.”

“Lake Creek started out as 33,000-square-feet. We put in a large kitchen and bar, along with as many party rooms as we could,” Mikki said. “After a few years, we expanded the location when Hobby Lobby closed beside us. We then added a 6,500-square-foot laser tag arena, indoor go-karts, escape rooms, high-end whiskey bar and lounge, and moved and enlarged our redemption counter.”

“You can get 300 different whiskeys and bourbons at the Whisky Bar along with the top Texas microbrews on tap, too,” Darren said. “It’s one of the best bars in town and people don’t really know much about it, but it’s really cool. It’s a great party place… We host everything from small, seven-person birthday parties to 2,000-person events that rent the entire venue.”

All three Pinballz restaurants serve made-from-scratch eats. In addition to stone-fired Italian-style pizzas, burgers, appetizers and craft cocktails, each location has special menu items that are unique to the venue.

Darren said Pinballz’s focus on “eat, drink, party, play,” makes it the perfect scene for any type of gathering, from birthday parties and corporate events to high school lock-ins. With endless games, attractions and dining options, anyone from age 1 to 100 is guaranteed to have a blast at all three Pinballz locations.

Pinballz will be celebrating their 12th Anniversary on Nov. 20 with a huge 12 Year Anniversary Party at Pinballz Lake Creek from 6-8 p.m. Everyone is welcome for a walk down the Pinballz history lane exhibit, food, drinks, a photo booth, a DJ and a birthday cake! Plus, enjoy daily specials on each of the 12 Days of Pinballz leading up to the event at all locations.

Interested in booking an event, or want to learn more about Pinballz’s three Austin-area locations? Head to their website at pinballz.com to view upcoming events, party opportunities and menu items.

Keep up with Pinballz via social media:

The above story was produced by Community Impact’s Storytelling team with information solely provided by the local business as part of their “sponsored content” purchase through our advertising team. Our integrity promise to our readers is to clearly identify all CI Storytelling posts so they are separate from the content decided upon, researched and written by our journalism department.