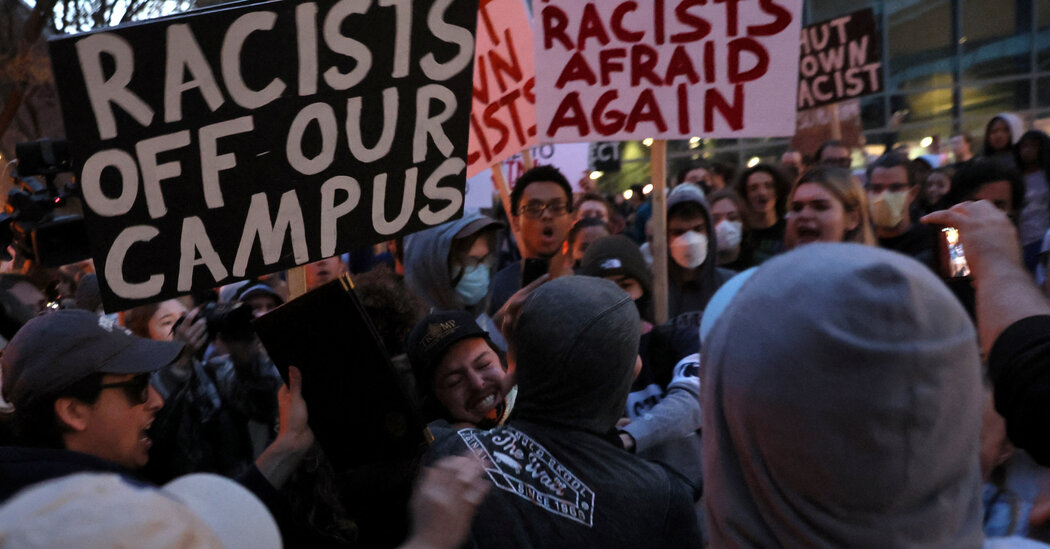 Pennsylvania State University canceled a planned comedy event on Monday that was to be co-hosted by the founder of the Proud Boys, a far-right group, after a demonstration against the speakers turned violent.

Penn State officials had previously said they would host the event featuring the Proud Boys founder, Gavin McInnes, in the interest of supporting free speech — even as they criticized what they called the speakers’ “vitriolic and hateful language.”

But the university reversed course just before the event on Monday night, saying in a statement that the campus police had determined that it should be canceled because of the “threat of escalating violence.”

The university’s president, Neeli Bendapudi, said in a statement that a peaceful street protest against the event had turned violent. She said it was her “understanding” that Alex Stein, a co-host of the comedy event, had entered the crowd and raised tensions.

“It is unclear which individuals on-site then resorted to physical confrontation and to using pepper spray against others in the crowd, including against police officers,” she said, adding that no one had been injured. The university did not immediately respond to a request for further comment, and the campus police declined to comment.

The event, billed as “politically provocative” comedy, had been organized by Uncensored America, a nonprofit that hosts what it calls “honest and fun conversations with controversial figures to fight censorship and cancel culture.”

Uncensored America was founded two years ago by Sean Semanko, a radio host and a field organizer for President Donald J. Trump’s 2020 campaign who attended Penn State. Neither the group nor Mr. McInnes or Mr. Stein could be reached for comment early Tuesday morning.

Mr. McInnes is a British-born Canadian who became a far-right provocateur after working at a hipster magazine in Montreal that relocated to Brooklyn. He founded the first official chapter of the Proud Boys in New York in 2016.

In January 2021, the Proud Boys were at the center of the violent attack on the United States Capitol. Several dozen of its members have been indicted in connection with the assault.

Protests against conservative and right-wing speakers on university campuses in the United States have focused national attention in recent years on the question of whether campuses are shutting out politically unpopular points of view.

In her statement on Tuesday, Ms. Bendapudi, who became the university’s president in May, defended the university’s initial decision to allow the comedy event, saying that it reflected the institution’s support for the constitutional right to free speech.

Ms. Bendapudi also expressed support for the students who had peacefully protested against the speakers, and noted that she had been among several hundred faculty, staff, students and others who gathered for an event on Monday to celebrate diversity at the university.