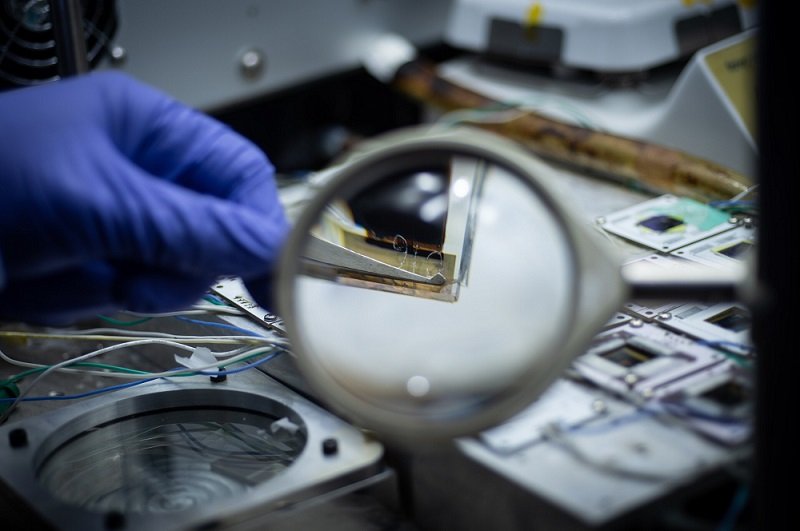 PRINCETON, N.J., June 27, 2022 — Researchers at Princeton University have developed a perovskite solar cell device that can perform above industry standards, maintaining operation for approximately 30 years — compared to the widely used 20-year threshold for solar cell viability. The device is the first of its kind to rival the performance of silicon-based cells, which have dominated the market since their introduction in 1954.

Perovskites are semiconductors with a special crustal structure that makes them well suited for solar cell technology. They can be manufactured at room temperature using much less energy than silicon, which makes them cheaper and more sustainable to produce. Where silicon is stiff and opaque, perovskites can be made flexible and transparent, extending their range of applications beyond what had been previously possible.

A highly stable perovskite solar cell under magnification during an accelerated aging process. The process, which researchers developed with a perovskite cell, helps forecast the extended lifetimes of advanced perovskite designs. Courtesy of Bumper DeJesus.

Unlike silicon, however, perovskites are notoriously fragile. Early perovskite solar cells (PSC), created between 2009 and 2012, lasted only minutes. The projected lifetime of the new device represents a fivefold increase over the previous record, set by a lower efficiency PSC in 2017. That device operated under continuous illumination at room temperature for one year. The new device is capable of lasting for five years under similar lab conditions.

According to engineering professor Lynn Loo, the record-setting design highlighted the durable potential of PSCs, especially as a way to push solar cell technology beyond the limits of silicon. But she also indicated the deeper significance of the work as being their new accelerated aging technique.

“We might have the record today,” Loo said. “But someone else is going to come along with a better record tomorrow. The really exciting thing is that we now have a way to test these devices and know how they will perform in the long term.”

Due to the relatively ephemeral nature of perovskite solar cells, long-term testing hasn’t been much of a concern until now. But as the devices get better and last longer, testing one design against another will gain importance in pursuit of rolling out durable, consumer-friendly technologies.

“This paper is likely going to be a prototype for anyone looking to analyze performance at the intersection of efficiency and stability,” said Joseph Berry, a senior fellow at the National Renewable Energy Laboratory who specializes in the physics of solar cells and who was not involved in the study. “By producing a prototype to study stability and showing what can be extrapolated [through accelerated testing], it’s doing the work everyone wants to see before we start field testing at scale.”

While efficiency has accelerated at a remarkable pace over the past decade, Berry said, the stability of these devices has improved more slowly. For them to become widespread and rolled out by industry, testing will need to become more sophisticated.

“These kinds of tests are going to be increasingly important,” Loo said. “You can make the most efficient solar cells, but it won’t matter if they aren’t stable.”

A testing method developed by the Princeton team speeds up the aging process by illuminating the device while blasting it with heat. This process accelerates what would happen naturally over years of real-time exposure. The researchers chose four aging temperatures and measured results across these four different data streams, from the baseline temperature of a typical summer day to an extreme of 230 °F. They then extrapolated from the combined data and forecast the device’s performance at room temperature over tens of thousands of hours of continuous illumination.

Results showed a device that would perform above 80% of its peak efficiency under continuous illumination for at least five years at an average temperature of 95 °F. Using standard conversion metrics, Loo said the value is the laboratory equivalent of 30 years of outdoor operation in an area like Princeton, N.J.

“It’s very credible,” Berry said. “Some people are still going to want to see it play out. But this is much more credible science than a lot of other attempts at forecasting.”