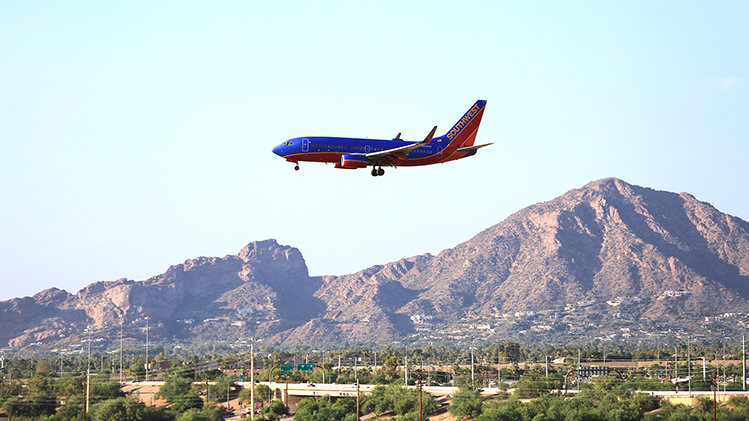 A dispute between Phoenix and Tempe over a proposed entertainment district and its possible repercussions on Sky Harbor Airport has escalated ahead of several public meetings, including a neighborhood gathering scheduled for Saturday.

The entertainment district, proposed for land at Priest Drive and Rio Salado Parkway, would include an arena for the Arizona Coyotes along with residential units, retail and office space and other development.

A neighborhood meeting on the project, organized by the developer, Bluebird Development, is set for 11 a.m. Saturday, Oct. 15, at Canopy by Hilton, 108 E. University Drive, Tempe.

Sky Harbor officials have said they do not object to the professional hockey arena, but Phoenix does reject the concept of having homes “directly under a flight path which was designed to spare Tempe residents from the effects of aircraft noise.”

Phoenix leaders also said including residential units as part of the project violates a longstanding intergovernmental agreement between the cities.

They reiterated their opposition last week and sent out thousands of mailers to Tempe residents and others stating the airport’s opposition and potential effects a project that included housing units would have on the area.

“This is not a game, and Tempe residents should not be used as pawns,” he said in a release. “No one should try to manipulate our community’s basic feelings of safety and security.

“As mayor, I am calling out this outrageous tactic in hopes that it is not repeated – and that all interested parties can consider this important matter calmly and responsibly.”

Woods said the statement by Sky Harbor that multifamily housing in the proposed development would violate a 1994 agreement between the cities is “significantly inaccurate.

“People interested in living at the proposed site would be well informed before making decisions – just like the thousands of other Tempe Town Lake-adjacent residents who already have chosen to live in an area with aircraft noise. Moreover, they do so in developments that saw no opposition from the airport when they were proposed and built.”

The chambers also will be the location for two Tempe City Council public hearings, 6 p.m. Tuesday, Nov. 22 and 29.