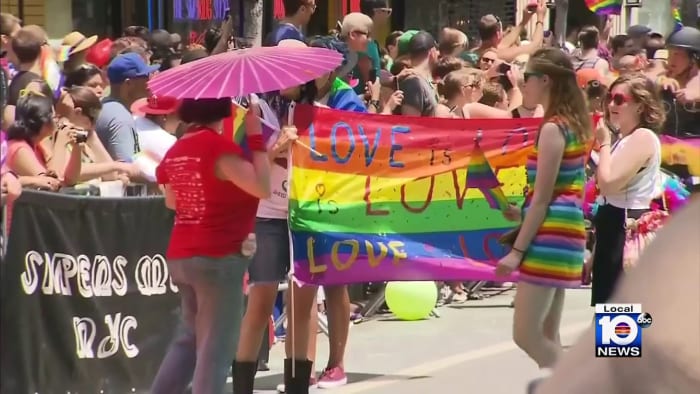 Baez-Geller, the school board member who proposed resolution H-11 to recognize October as LGBTQ History Month, was the only one who voted in favor of it on Wednesday.

“It’s really harmful that it did not pass last night and I’m really saddened by it,” Baez-Geller said adding, “It was not in violation of the most recent law that passed, the Parental Rights in Education bill, and it also included the opt-out language.”

The same measure had passed with a 7-1 vote last year. Baez-Geller felt the power of the influence of the Republican Party’s right wing’s nationwide push for the resurgence of the politics of social conservatism.

DeSantis has aimed to make Florida an example of it. Sean Foreman, a political science professor at Barry University, said to him it was clear that statewide political theater really outweighed the legal issue the local school board members faced on H-11.

Foreman said DeSantis, who is running for reelection this Nov. 8, has been successful in his attempt to put controversial issues such as critical-race theory and anti-LGBTQ+ views front and center.

The Parental Rights in Education bill, also known by critics as the “Don’t Say Gay” bill, prohibits classroom instruction on sexual orientation or gender identity from kindergarten to third grade.

The Stop WOKE Act prohibits training in public schools, colleges and universities, and workplaces that may cause someone to feel guilty or ashamed about the past collective actions of their race or sex.

“They have scared local school board officials to be extremely cautious about what they say and how they vote on these issues,” Foreman said.

During the meeting, Baez-Geller said the academic aspect would have applied to Supreme Court cases in 12th-grade classes that students would have been able to opt out of if their parents wanted them to. This was not enough for her colleagues.

“We have to be in accordance with the law,” said Tabares Hantman before the 8-1 vote.

Orlando Gonzales, the executive director of Safeguarding American Values for Everyone, a nonprofit organization to protect the LGBTQ community in South Florida, has been concerned about the consequences of DeSantis’s laws.

“One of the things that we have said is that The Parental Rights in Education bill would have much greater implications than people predicted,” Gonzalez said.

“We already knew we were in a hyper-sensitive political environment but it just keeps getting worse.”