Queen Elizabeth – the monarch born in the technology age 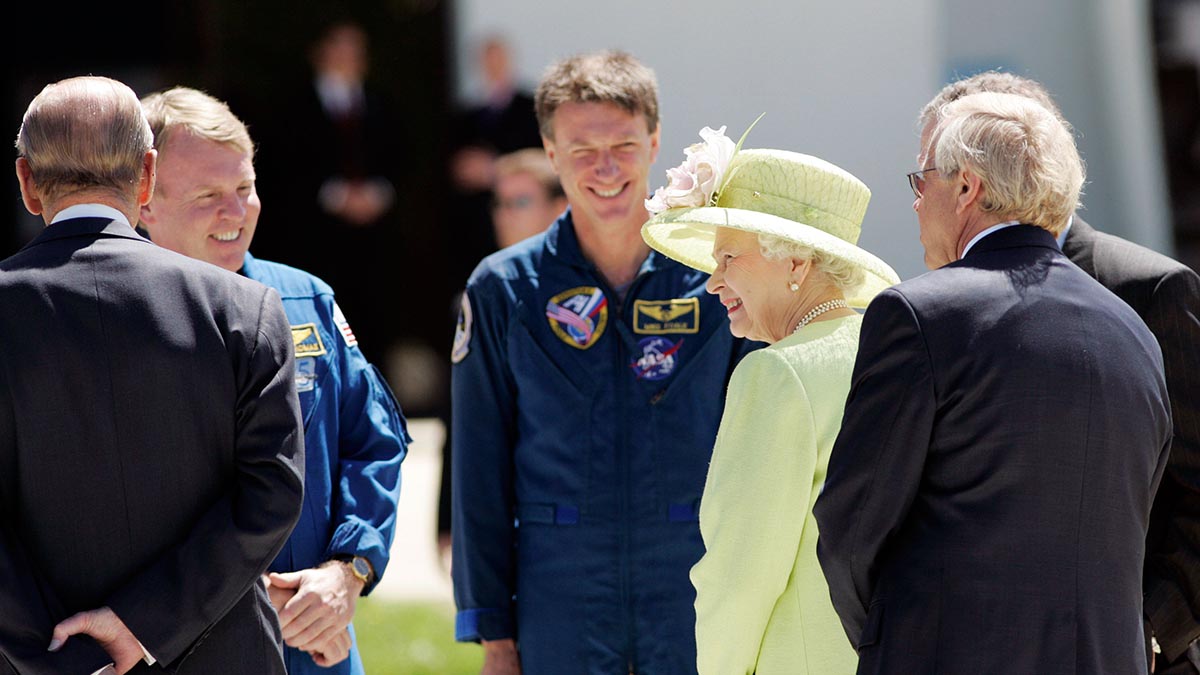 Born April 1926, the late Queen Elizabeth II experienced a life and reign of huge technological, social, and scientific advancement. She was not shy of technology or science.

Despite this lifetime of change, Queen Elizabeth and her Husband the Duke of Edinburgh didn’t shy away from associating with scientific and technological advancement. Here’s four areas which have changed dramatically over Queen Elizabeth’s life.

On the 29th of May 1953, Sir Edmund Percival Hillary and Sherpa mountaineer Tenzing Norgay became the first climbers to reach the summit of Mount Everest. The news was kept secret from the public until the day of Queen Elizabeth’s coronation – with media calling it a ‘gift to the Queen’.

This was seen as one of the most exciting and difficult endeavours conquered at the time, yet only sixteen years later – in July 1969 – three astronauts flew to the Moon as part of Apollo 11, with two walking on the surface.

A coin-sized silicon disk filled with messages from over 70 heads of state was left on the Moon, Queen Elizabeth’s section wrote simply “On behalf of the British people I salute the skills and courage which have brought man to the moon. May this endeavour increase the knowledge and well-being of mankind.”

In October of that same year the Queen and Prince Phillip met the three astronauts at Buckingham Palace to congratulate them in person.

The queen and her husband were not shy of being associated with scientific and technological advancement. Queen Elizabeth 11 sent her first email in 1977 and personally made the acquaintance of Peter Higgs, of Higgs bosun fame.

Higgs at first refused the offer of a knighthood as he felt they were being used for political purposes but the Queen gave him the Companion of Honour which he accepted because he was told they were awards of the Queen alone. They were a similar age.

With Hubble having launched in 1990, and JWST this year, we’re peering deeper into far flung worlds than we ever have before. In Queen Elizabeth’s last years, SpaceX and other companies were regularly sending reusable rockets into space – a feat thought impossible for much of her life.

The way we communicate has shifted almost completely over the course of Elizabeth II’s life. As a child, the Queen made her first public speech in 1940 during WWII. This was over the radio on the BBC – a service that only begun in 1922, four years before her birth.

Her coronation in 1953 was a major television event when televisions were a relatively new thing – the British Science Museum suggests that “in the two months preceding the coronation, British viewers bought more sets than in any previous comparable period.”

During WWII, English codebreakers were using early computers to help win the war, and ‘personal computers’ didn’t enter homes or workplaces until the second half of her life.

Then came the internet. In March 1976, the Queen visited a telecommunications research centre in Malvern, England and used ARPANET – a military computer network linking universities, government agencies and defence contractors – to send an ‘email’, long before it was used like it is today.

“There were there was an early type of internet, but it didn’t run in the way that most people think of the internet now,” says Monash University Associate Professor Alan Dorin, who specialises in the history of technology.

The late Peter Kirstein, dubbed “the European father of the internet”  set up the Queen’s first official email account, HME2, and guided her through the process of sending her first message.

Her username was also quite interesting – “HME2.”

Get an update of science stories delivered straight to your inbox.

“Nowadays, we think of a ‘protocol’ which is the way that computers communicate … That wasn’t around in the 70s. So that email would have gone on a sort of a limited version of the internet.”

When the Queen was a child, boats were the only way to travel long distances. Amelia Earhart and her navigator Fredrick Noonan went missing in 1937 – when Queen Elizabeth was just 12 years old.

Even in the 50s, when longer international travel could occur (with multiple stops to refuel) the Queen’s first visit to Australia (and many other Pacific Commonwealth countries) in 1954 occurred on a boat called the SS Gothic.

However, that was not to say she hadn’t been using air travel before then. When Edward became king in 1936, ‘The King’s Flight’ was formed as the world’s first head of state aircraft unit. This became ‘The Queen’s Flight’ after his death.

In 1952 she travelled from the UK to Kenya, on a British Overseas Airways Corporation plane called the Argonaut, with Prince Phillip.

However, these flights could only ever be relatively short. It wasn’t until 1989 that the first Qantas flight travelled non-stop from London to Sydney.

She was an absolute jetsetter throughout her life, with one expert suggesting she has travelled enough that it would loop the Earth 42 times.

Although it was all the way back in 1896 that a paper by a Swedish scientist predicted that carbon dioxide levels could alter the temperature of the planet, it wasn’t until 1938 – when the Queen was just 12 – that a British scientist connected carbon dioxide increases in Earth’s atmosphere to global warming.

In her lifetime, the climate has irreversibly changed, culminating in the joint hottest summer on record for England this year – a match with the summer of 2018.

“The effects of climate change have gone from being almost imperceptible in the 1950s,” says Dorin. “And now here we are in bushfires and floods.”

“Climate change was some future problem.”

While the new King, Charles III is known as a vocal advocate for environmentalism, and Price Philip the president of the World Wildlife Fund, Queen Elizabeth’s more politically neutrality only went so far in her later life.

In 2021, she was overheard saying that she was “irritated” by those who talk but don’t act on climate action ahead of the UN’s COP26 climate conference in Glasgow.

At the climate talks, she later said in a video message that many people hoped the “time for words has now moved to the time for action”.

Sabre May Be Looking to Sell Its Hospitality Technology Business |