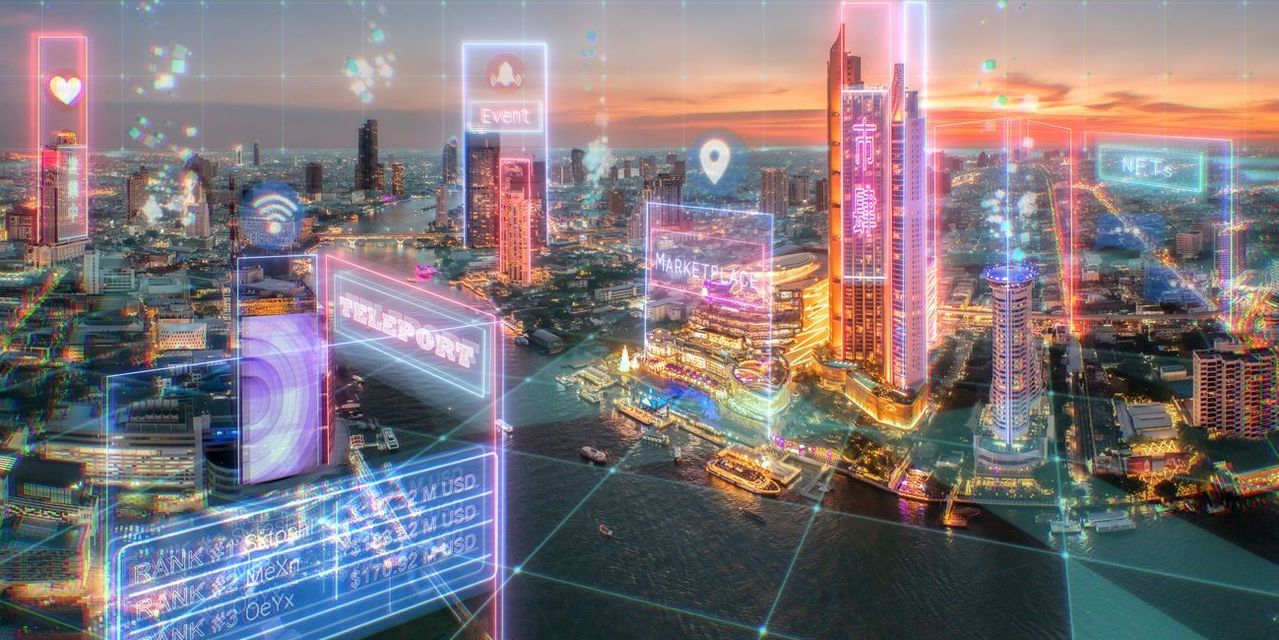 Virtual real estate investment is on track to triple this year compared to last, one expert predicted during a panel discussion in the Mansion Global Experience Luxury conference on Wednesday.

“In 2022, there’s been over $1 billion in sales of virtual land,” said
Noah Gaynor,
the co-founder and CEO of Parcel, which offers tools for finding a home in the metaverse.

The virtual event focused on the intersection of tech real estate with input from expert panelists who addressed how the sector is adjusting in an increasingly digital and high-tech landscape.

More: ‘Magical’ California Ranch That Was Popular With Hollywood Royalty on Market for Only the Second Time in 80 Years

The concept of a metaverse, that is, online platforms with virtual, as opposed to real world, experiences, as well as life-like aspects including currency, economies and property ownership can be a tough one to grasp.

“Many people are in it and don’t realize,” said
Marc Norman,
the associate dean at New York University’s Schack Institute of Real Estate. “Whether that’s playing solitaire in a casino, or a sim in a game. I think one way to look at it is like a flight simulator, being able to do something and think about it but not be in it.”

The real estate being sold in the metaverse—whether that be on a platform such as Decentraland, Otherside or the Sandbox—is primarily empty plots where people can build, say, a virtual shop or a digital art gallery. But a new wave of demand is coming for prefabricated buildings, the experts said.

“We’re starting to see designers and architects create those,” Mr. Gaynor said, adding that he expects to see that trend grow in the next couple of years.

He was echoed by
Michael Gord,
co-founder and CEO of global digital-asset investment and capital markets advisory firm GDA Capital. “There is quite a lot of demand for [prefab property] and there’s new marketing tactics like build-a-thons,” he said.

More: A Crystal-Powered Property in the Hollywood Hills to Get Charged up About

Though differences may abound between virtual and real-world real estate, at least one factor overlaps and that’s how they’re valued.

“What we’ve seen actually is quite similar to the real world right now,” Mr. Gaynor said. “Just like the real world, there’s more value if it’s near a road, near water or near somewhere with status. Right now it is very much like what we intuitively think would make land valuable.”

And, just like in the real world, that value can fluctuate.

“Virtual real estate in terms of price has come down,” Mr. Gaynor added. “However we are seeing that sales of real estate are becoming a bigger proportion of NFT sales.” Virtual real estate would typically account for 5% of all NFT trading volumes, but this last quarter, it stood at close to 14%, he said.

Investors though, can position themselves favorably by developing their virtual land.

“Similar to the real world, if you just buy a parcel of land and you don’t do anything with it, your returns are going to be less,” Mr. Gord said. “If you want to deploy capital into land, it’s a high-risk, high-reward investment, but it’s higher risk if you don’t build on it.”

For those debating a buy, “on the fundamental side, fundamentals are strong as ever, development in-world is strong as ever,” Mr. Gaynor said. And with prices down so much compared to the peak, virtual real estate is “a great opportunity right now.”

Back in the real world, simplicity and security are hot topics in home automation, having emerged at the top of buyers’ wish lists.

“At the very heart of all of our projects is the client brief, making sure we’re responding to what the client requested,” said
Natalia Miyar,
founder of
Natalia Miyar Atelier,
during a panel titled “The Future of Home Design and Automation.” And increasingly, that means a sophisticated but simple solution, she said.

“Our clients are looking for the simplest control. The days of having an iPad in every room, it just doesn’t work for our clients any more. They want an on-and-off button,” she said.

In California, “our clients are definitely looking outside when it comes to home automation,” said
Jaqui Seerman,
CEO of Jaqui Seerman Design. “The exterior of the house, the firepit, the pool lighting, the music, any sort of ambient lighting. Those are all equally important.”

More: London’s Most Expensive Home, a 20-Bedroom Megamansion, Is Back on the Market for £200 Million

And simplicity reigns in the outdoors, too. “Everyone wants that very light touch, where they can approach all of it from their phone, without having to run around the yard,” she added. Whether inside or out, homeowners want control over their automation at their fingerprints, Ms. Seerman said.

Security is increasingly important among clients, according to
Francis Nicdao,
principal and chief creative officer at Pembrooke & Ives. It’s “super important these days, the kind of thing that lets [clients] sleep at night.”

And with more peaceful slumber on the cards with security carefully controlled, it should come as no surprise that there’s also a renewed focus on primary bedroom suites.

“Perhaps parents want to escape their kids, I don’t know what it is,” Mr. Nicdao said. “But most importantly the primary bedroom has become sort of the command station, where they control security, lighting, whatever it is. [It’s] almost a kind of escape or way to monitor your kingdom.”

In the world of sustainability “sustainable luxury is here to stay,” said
Scott Morris,
director of carbon sequestration at Marisol Malibu. “These are the Teslas and Patagonias of homes.”

While green buildings can be thought of as austere, “I think that’s completely wrong,” added
Aandreas M. Benzing,
founder of
A. M. Benzing
Architects, during a conversation titled “Zero Energy/Passive Home Innovation.”

“I think for luxury, it’s a must,” he said.” There’s no reason why we shouldn’t build beautiful or bigger.”

Indeed, sustainable choices can be made throughout a luxury home. “A lot of interior designers like to select French white oak,” Mr. Morris said, who instead uses an American white oak from the Alleghenies in Pennsylvania. “We didn’t skimp on luxury, it’s still a luxury floor, but better for the environment.”

Homeowners looking to pair luxury with eco-friendly practices may have to tweak some of their expectations slightly, though, according to Juhee Lee-Hartford, founding and managing principal at River Architects. It “can be challenging, the clients want lots of windows or tall volumes of space, so we have to balance.”

One thing they needn’t be too concerned with though, is cost.

“Cost is always difficult to nail down, but in general it doesn’t cost that much more to build a passive house,” Mr. Benzing said. Owners can expect a 0% to 5% premium, depending on building size, he added.

And the costs of adding energy efficient measures are quickly recovered in savings, the experts said.

For high-end buyers in Southern California, seclusion is king, according to
Rod Watson,
the co-founder of Aston Rose and a former basketball player.

“Privacy is always the top thing,” he said during a panel titled “Future Players in the Market: Athletes Become Agents.” His clients are looking for gated properties with “limited access to see in, or even tell what’s going on in there.”

Other amenities at the top of wish lists include open-plan layouts, pools, hot tubs, gyms, movie theaters, and for his NBA clients, basketball courts.

But while
Michael Jordan’s
highly customized and huge home in the Chicago suburbs with a full basketball court has languished on the market for a decade, the same wouldn’t happen on Mr. Watson’s watch.

“It’s just about being honest with the client. I’ve been in a situation where I’ve had to tell clients ‘I dont think it’s going to benefit you to pay this much or have this much home,’” he said. “I think you just have to be honest and tell them this doesn’t make sense.”

It doesn’t happen often though. Shedding the ‘dumb jock’ stereotype, “today’s generation of athletes and entertainers, they’re savvy,” he said.

The competitive nature that once helped drive these real estate experts in their former careers as pro athletes, still helps today.

“It comes down to just having that competitive drive, that transfers over for sure. Being persistent and results orientated” said
Viktor Simco,
vice president of acquisitions at SRG Properties and a former snowboarder. “I don’t mind the chase and getting into the weeds and finding that right deal.”