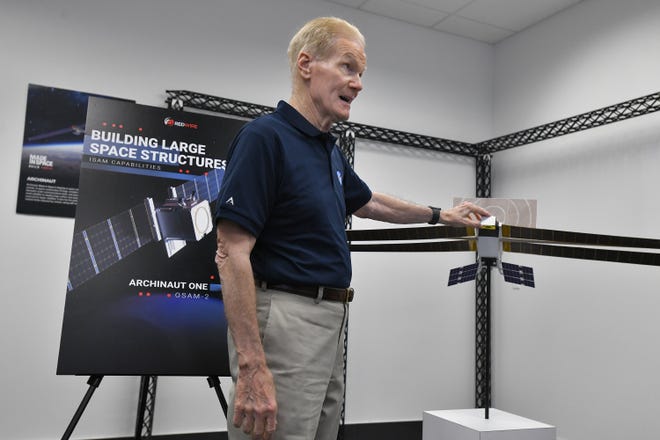 Nelson recently took a tour of the technology being developed at Redwire, an aerospace manufacturer and space infrastructure company. He said he would not have expected for Jacksonville to take such a prominent role in space developments 50 years ago when he met his wife in the city.

During the tour earlier this month at the Baymeadows facility, Redwire touted developments that will allow astronauts to manufacture and service equipment while in space, including robotics and 3D printing technology.

Nelson explained this technology is crucial to the advancement of space travel because it will reduce the number and size of items being launched.

For example, one of the spools of printing material demonstrated for Nelson could produce a structural beam about 50 feet long.

“You’re able to get much larger structures into space because you’re building them up there,” he said. “You don’t have to manufacture everything on Earth before taking off.”

This saves space on rockets already set to launch and reduces the need to build bigger rockets in order to use larger pieces of equipment.

Additionally, some of the robotics technology is focused on changing and deorbiting space debris, which can cause problems for the International Space Station and satellites in the same orbit.

Nelson said this type of work at Redwire is the key in extending stays on the moon and manning trips to Mars.

Redwire’s contracted work is part of a $74 million NASA-funded initiative to expand the scope of what is possible to do and accomplish in space.

The next step in the process for this equipment is to take it from the “demonstration phase to the operational phase,” said Redwire President and COO Andrew Rush.

A SpaceX launch mission in 2023 will be the test run for this Redwire equipment, which is tasked with building, assembling and deploying a solar array in orbit.