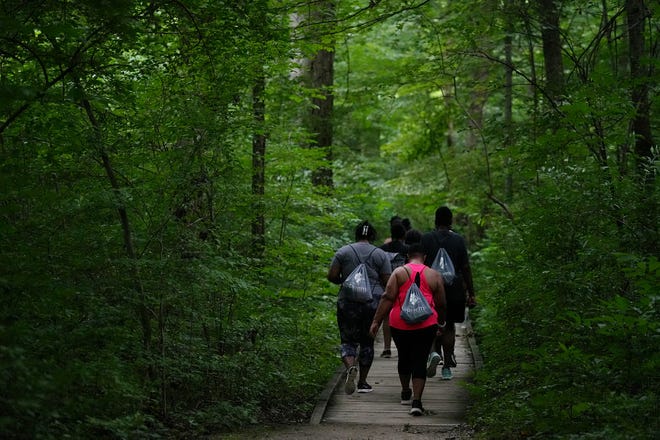 About 15 parents stood in a circle at Blacklick Woods Metro Park in Reynoldsburg, braving the heat and humidity of a late July evening.

Everyone had their eyes closed. One woman had a hand on her heart and the other on her stomach.

“I am enough just as I am,” Ivory Levert said, leading a guided meditation. “I welcome moments of rest and ease and put it into everyday life. I speak my truth and ask what I need.”

The group was gathered on July 24 as part of Root to Rise, an event where cofounders of the organization Black Women In Nature took members of Rise — a maternal mental health organization that caters specifically to Black parents — on a walk through the park.

Black parents and mental health: Counseling help can be harder to come by

Rise is a branch of Perinatal Outreach and Encouragement for Moms (POEM), a program of Mental Health America of Ohio that provides peer support groups, referrals, and education on pregnancy and mood and anxiety disorders for moms and families in Ohio.

The nature walk capped off Rise’s week of events for Black Maternal Mental Health Week, which in turn was part of National Minority Mental Health Awareness Month in July. The designation acknowledges the struggles that underrepresented groups face in regard to mental illness in the United States, according to Mental Health America.

To help, Rise provides a mentor program and referrals to counselors and psychiatrists of color, among other offerings.

“They provide wraparound services like the support groups that are happening frequently and then they also call you depending on what’s going with your pregnancy or in your life,” said member Tiffany Davis Hale, 30, of the East Side.  “It’s really based off on what you need and I like that.”

When Hailee Childs, 34, joined POEM as its senior manager of community programs in 2019, Rise was already being developed by the organization. Her job was to promote it and organize the first support group.

“We started to be intentional about making sure we were in the doctor’s offices, in the OB (obstetrician) office, the pediatrician offices and in the WIC (Special Supplemental Nutrition Program for Women, Infants and Children) offices where our moms are,” Childs said.

POEM and Rise program coordinator Cass Stewart, 44, said the organization recognized there was a gap in care for women of color in Greater Columbus and that a separate branch was needed.

According to the Maternal Mental Health Leadership Alliance, mental health conditions such as depression and anxiety disorders are the most common complications of pregnancy and childbirth, affecting one in five people during pregnancy or after childbirth.

Black women are twice as likely to experience mental health conditions but only half as likely to receive treatment. More than 50% of postpartum depression cases for women of color go unreported, according to the alliance.

“We noticed that our services needed to be more culturally connected and specific for that group,” Stewart said. “So Rise became a thing and started to grow.”

The number of referrals from health care providers significantly increased during the early days of the pandemic, especially when shutdown orders were in place, Stewart said.

For this year so far, the number of referrals is at 576 people, Childs said.

The majority of Rise’s support group meetings have been virtual over the past two years, but they will move to in-person gatherings at the end of August, she said.

Both Childs and Stewart know first-hand about these sorts of services. Both said they experienced depression and anxiety after having premature births.

“I feel like I’m just using my superpowers to help other moms activate their superpowers, too, that you can really do this,” Stewart said.

Gun violence:Franklin County may declare gun violence a public health crisis. What would that mean?

Mental health and seniors:How senior centers improve the mental and physical health of their members

One of the Rise members attending the recent nature walk was Turquoise Connelly, who noted, as the group took their first break during a 1.5-mile walk, how refreshing it was to be in nature with a group of Black women.

“Normally, when I go by myself, I feel very much on edge just feeling physically alone and then knowing that people have their expectations and aggressions towards Black people out in the woods; like you’re not supposed to be there,” Connelly said. “But I don’t feel that right now.”

Connelly, who is nonbinary and uses they/them pronouns, said they felt alone after they had their daughter Riley in 2020, experiencing postpartum depression and anxiety. Most of that stress was due to being diagnosed with postpartum preeclampsia, a condition that occurs when one has high blood pressure soon after childbirth.

“It made it extremely hard to breastfeed, and I had all of these people (doctors and lactation groups) that would shame me when I was struggling to breastfeed and they wouldn’t give me any medical support for it to help me increase my supply,” Connelly said. “And the emotional resources were lacking, too.”

The 33-year-old Franklinton resident was prescribed two high blood pressure medications but was still having difficulty pumping milk. So, they switched to formula.

Connolly joined Rise in February and said their mental health has greatly improved. Members referred them to a therapist to help with anxiety and depression and they feel welcomed into the group as a LGBTQ person. One-year-old Riley even joined Connelly on the nature walk.

Now pregnant with their second child, Connolly feels more prepared this time around.