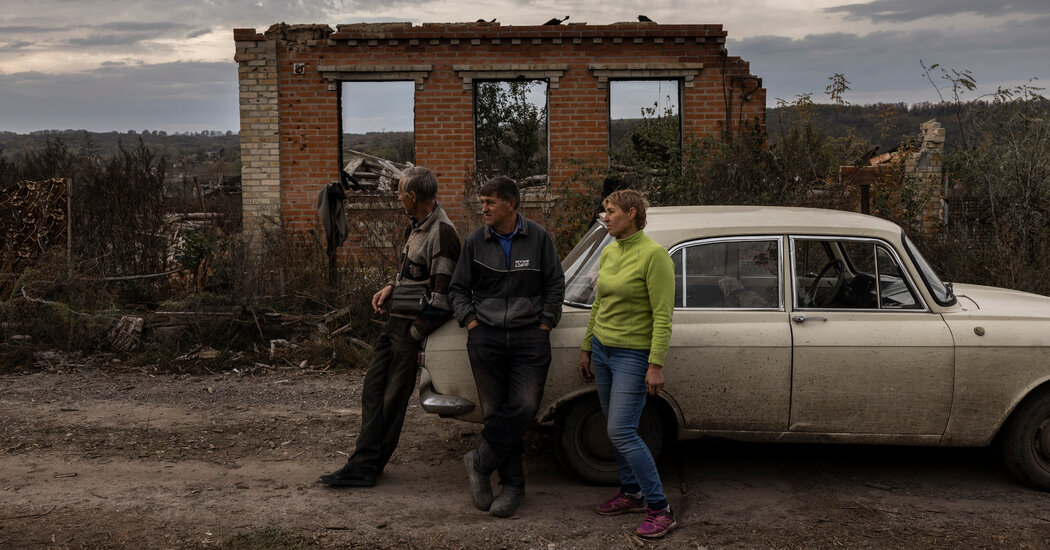 President Vladimir V. Putin of Russia declared martial law on Wednesday in four regions of Ukraine that Moscow illegally annexed but that it does not fully control, a move that would allow the pro-Russian authorities to impose even tighter restrictions as Moscow fights to hold off Ukraine’s military advances.

Separately, Mr. Putin said he was handing more power to regional governors inside Russia, implementing wartime measures that would allow for significantly more restrictions, apparently aimed at keeping a lid on dissent at home.

A presidential decree announced martial law in the Donetsk, Luhansk, Kherson and Zaporizhzhia regions — whose annexation by Russia last month has been condemned internationally as illegal. Russia has suffered weeks of setbacks on the battlefield, and its proxies in the southern region of Kherson have begun relocating civilians in apparent anticipation of a major fight for the regional capital.

Moscow has been ordering residents of the region living west of the Dnipro River to evacuate before a possible Ukrainian counteroffensive, a move that Kyiv has dismissed as scaremongering. Just before Mr. Putin’s speech, videos released on Russian media showed lines of civilians apparently boarding ferries at a river port to evacuate.

“I signed a decree on the introduction of martial law in these four constituent entities of the Russian Federation,” Mr. Putin said at the start of a meeting of his Security Council via videoconference, referring to the four Ukrainian regions that the Kremlin unilaterally declared to be part of Russia. “In addition, in the current situation, I consider it necessary to give additional powers to the leaders of all Russian regions.”

Within hours of the decree, the Federation Council, the upper house of Parliament, approved it unanimously.

As of late last month, the Russian army controlled most of the Luhansk and Kherson regions and about half of the Zaporizhzhia and Donetsk regions. Martial law in the four annexed territories would allow the authorities to impose curfews, seize property, imprison undocumented immigrants, establish checkpoints, detain people for up to 30 days and forcibly resettle residents to another region.

The president also ordered the creation of territorial defense forces, a type of civilian militia, in the four annexed regions, raising the possibility that Moscow’s forces may try to conscript Ukrainians to fight their own country’s forces, part of a broader effort to mobilize hundreds of thousands of new fighters as its forces suffer huge casualties.

Mr. Putin has grappled with growing anger at home over his call-up of about 300,000 reservists to fight in the war. Protests have erupted in far-flung cities, recruitment centers have been the target of arson and thousands of military-age men have packed planes and vehicles to flee across Russia’s borders.

Some analysts said the Russian leader is being forced to signal to his nation that there may be more pain to come.

“Putin has to prepare the country for much harder times, and he needs to mobilize resources,” Tatiana Stanovaya, a Russian political analyst, said in a phone interview

Analysts said it was remarkable that Mr. Putin declared martial law, since he continues to avoid calling the invasion of Ukraine a “war” and instead uses the term “special military operation.”

“When you call it a war, it means that your special military operation failed,” Ms. Stanovaya said.

“In general, all this looks not so much like a struggle with an external enemy, as much as an attempt to prevent the ripening revolution within the country,” Mr. Gallyamov wrote on Telegram.

The separate decree allows for significantly more restrictive measures to be introduced in 26 regions across Russia, closest to Ukraine, including in Moscow, to more tightly control critical infrastructure facilities, public transit and communications. According to Mr. Putin, the regional leaders will be given additional powers “to ensure security.”

As with many Russian laws, there are open provisions that allow for broad interpretation and regional governors can choose which they enforce. For example, the law allows for suspension of the activities of political parties, public organizations and religious groups, or any activity deemed to undermine the defense and security of the Russian Federation. It also allows governors to set up restrictions to the entry and exit from their region.