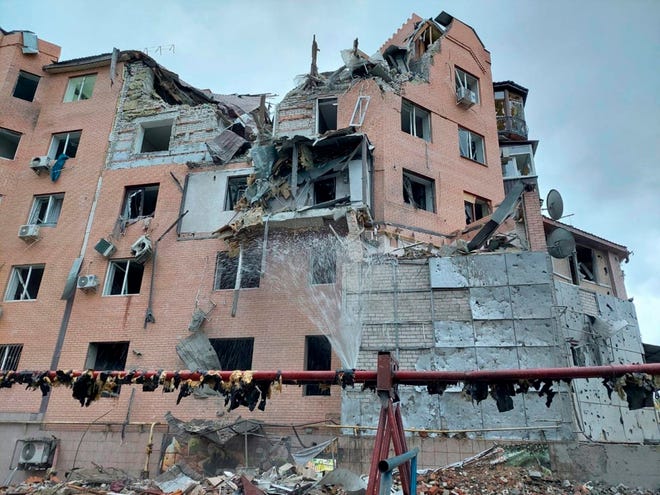 Russian military leadership in the occupied city of Kherson have fled across the Dnieper River, leaving behind new Russian recruits to try and stall the Ukraine military’s push to recapture the city, a Washington-based think tank says.

“Using such inexperienced forces to conduct a delaying action could prompt a Russian rout if Ukrainian forces choose to press the attack,” the Institute for the Study of War says in its latest assessment of the war.

The institute says that at least one Russian war blogger noted that the situation in Kherson is dire for frontline Russian troops that could find it ”virtually impossible” to evacuate. How to get those troops out and how to explain the flight from Kherson – which the Kremlin says it has annexed – to the Russian populace remain crucial issues for Russian leadership, the assessment says.

The Russian Kherson Occupation Administration announced Saturday that “all citizens of Kherson must immediately leave the city.” Russia is likely trying to depopulate parts of the region that Ukraine will recapture, damaging the long-term social and economic viability of southern Ukraine, the assessment says.

►Two Russian pilots died when a fighter jet crashed into a home in the Siberian city of Irkutsk during a trial flight, the Russian Emergency Situations Ministry said Sunday. No injuries were reported on the ground, the ministry said.

►Russian authorities reported that they are building defensive positions in occupied areas of Ukraine and border regions of Russia amid a powerful Ukrainian counterattack that has reclaimed hundreds of miles of territory.

Russian accuses Ukraine of planning to use nuclear device as ‘provocation’

Russian Defense Minister Sergei Shoigu on Sunday was pressing his claim that Ukraine was preparing a “provocation” involving a radioactive dirty bomb. Shoigu spoke with U.S. Defense Secretary Lloyd Austin, British Defense Minister Ben Wallace and others accusing Ukraine of planning to escalate the war. Wallace, his office said, refuted the claims and cautioned that such allegations should not be used as a pretext for greater escalation on the Russian side. The western officials reiterated wider international support for Ukraine and desire to de-escalate this conflict.

Ukraine President Volodymyr Kelenskyy pleaded with Ukrainians to curb energy consumption, saying in his overnight address that Russian strikes continue to target electricity infrastructure. Many districts are without power, he said, and rolling blackouts are now a daily occurrence across much of the nation. He urged his countrymen to listen to local authorities and power companies planned blackout schedules and to “plan your day” around them.

Herman Halushchenko told Reuters that up to 40% of overall national power infrastructure had been hit in attacks that he claimed was intended to destroy Ukraine’s energy system.

“Russian propagandists are lying when they say that this terror against our infrastructure and people can somehow slow down the active actions of our military or create some difficulties for our defense,” Kelenskyy said.