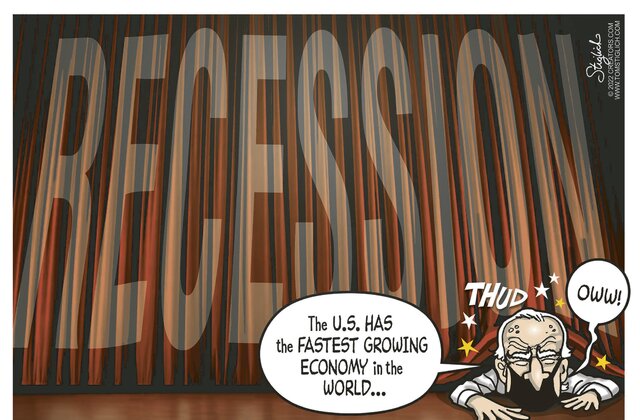 Republican Rep. Glenn Thompson, who represents a rural swath of western Pennsylvania that overwhelmingly backed former President Donald Trump in the 2020 election, gave a moving toast at his son’s wedding earlier this month.

“We love it when they find their one true love, especially when they become a part of our families,” he said in a speech that seemed to portray genuine happiness in welcoming his son’s new husband to the family. “That’s what we’re rooting for.”

Three days later, Thompson cast his vote against the Respect for Marriage Act – a bill that would enshrine Obergefell v. Hodges, the 2015 Supreme Court decision that legalized same-sex marriages, like that of his son, should the high court overturn its previous ruling, as it recently did with Roe v. Wade.

The legislation, just four pages long, would repeal the 1996 Defense of Marriage Act and require states recognize any marriage between two people, regardless of the “sex, race, ethnicity, or national origin of those individuals.”

When the proposal was brought to the House for a vote, 47 Republicans crossed party lines to support the measure – including No. 3 Republican Elise Stefanik of New York and Tom Emmer, a Minnesota Republican and the chairman of the National Republican Congressional Committee. But Thompson was among the vast majority of his GOP colleagues that opposed the proposal.

In the end, just 22% of 211 House Republicans voted in favor of the bill, despite the fact that a record-high 71% of Americans now support same-sex marriage, according to the most recent Gallup poll, including 55% of Republicans.

Now, as Senate Majority Leader Chuck Schumer of New York navigates when to bring the bill to the floor of the Senate chamber for a vote ahead of the looming midterm election, the question before Senate Republicans is whether or not they affirm and reflect their supporters.

“Republicans are more concerned about their base and their primary voters than the general population that they represent,” says Lanae Erickson, senior vice president for social policy, education and politics at Third Way, a Washington think-tank that aims to bridge political parties on issues. Erickson spearheaded the organization’s efforts to mobilize moderate Americans to support marriage for gay couples by changing the conversation from legal rights and benefits to the importance of making a lifetime commitment in front of family and friends.

“It kind of makes sense that they are more conservative on social issues because really what they’re worried about are the 10% of people who show up to a Republican primary,” she says. “But what is unique to this issue is how quickly public opinion changed and how it has stayed that way. It has continued to solidify rather than having a backlash.”

Of course, it wasn’t so long ago when same-sex marriage was a non-starter for elected Democrats, too.

During the 2004 presidential election, the issue presented a political quagmire for former senator and secretary of state John Kerry, a Massachusetts Democrat who at the time opposed gay marriage but also opposed legislation that would amend the constitution to define marriage as being between a man and a woman. A year earlier, the Massachusetts Supreme Court found the state’s ban on same-sex marriage unconstitutional, making it the first state in the country to legalize same-sex marriage.

At the time, 42% of the American public thought that marriages between same-sex couples should be recognized by the law as valid, including 51% of Democrats and 19% of Republicans, according to Gallup polling from May 2004. Some political historians point to the issue as being one of the most significant factors in the reelection of former President George W. Bush that year.

In fact, it wasn’t until 2012, after then vice president Joe Biden said in an interview that he was comfortable with the idea of men marrying men and women marrying women – a statement made in the height of the presidential campaign season – that pushed former President Barack Obama to became the first sitting U.S. president to support legalizing same-sex marriage.

“I think same-sex couples should be able to get married,” he said, explaining how his thinking has evolved in part due to the fact that his daughters’ friends have two moms or two dads. “It wouldn’t dawn on them that somehow their friends’ parents would be treated differently. It doesn’t make sense to them and frankly, that’s the kind of thing that prompts a change in perspective.”

The dual admissions, from a ticket that in 2008 that had zero interest in redefining what constitutes marriage, was an acknowledgement of the incredible sea change in public opinion on the issue. In 2008, 40% of the American public supported same-sex marriage, including 53% of Democrats and 17% of Republicans. Four years later, 50% of the American public did, including 55% of Democrats and 22% of Republicans.

“I think that really had to do with the fact that the movement made a decision that persuading people was the most important thing,” Erickson says. “We wanted to build something that was sustainable and not something that we had 50.1% and then it was going to go back and forth with every administration or change in Congress.”

Support for gay marriage among the American public and both parties has continued to rise. Today, 71% of Americans support same-sex marriage, as do 87% of Democrats and 55% of Republicans. Yet unlike Democrats, many Republicans elected to Congress have been loath to follow their flock, electing instead to dig in their heels on an issue that more than half of their supporters say they back.

Political scientists are quick to point out that research shows that elected Republicans consistently overestimate the conservativeness of their constituents.

“Republican legislators and congressional staff tend to overestimate the conservativeness of their constituents,” says Matt Grossmann, professor of American politics and public policy and director of the Institute of Public Policy and Social Research at Michigan State University.

“There is evidence where researchers have poll results from their district and ask them to estimate and they consistently estimate more conservatively, and usually as conservatively as the most conservative district for their state,” he says. “That is not uncommon.”

Moreover, Grossmann says, public opinion rarely changes so quickly on an issue as it has with same-sex marriage.

“The gay marriage change is unlike almost anything else in terms of how much public opinion has changed in a short number of years,” he says. “It may be true that just with these kinds of dramatic changes in public opinion, you can imagine politicians have been around a while, and they may have longer memories in terms of this issue being a negative for them.”

There are political calculations being made as well, such as not allowing Democrats to notch a win ahead of the midterm election. But for Senate Republicans, it’s the latest example in which they find themselves pulled between public opinion and the far-right wing of the party’s latest culture war gone wild – a larger anti-LGBTQ movement that’s playing out at the state level in much more visceral ways, from Florida Gov. Ron DeSantis and his “Don’t Say Gay” law to the newly adopted Texas Republican platform, which refers to homosexuality as “an abnormal lifestyle choice.”

Senate Republicans will soon have the same opportunity as their colleagues in the House to affirm or dispute just how deep the chasm is between them and the Republicans they represent on the issue of marriage equality.

As it stands, Schumer has tasked Sen. Tammy Baldwin, a Wisconsin Democrat who, in 2012, was the first openly gay person to be elected to the Senate, to lobby her Republican colleagues in hopes of confirming support for the measure from 10 of them, which would give Democrats the 60 votes they need to overcome a filibuster.

It’s been slow-going so far, with GOP members painting the bill as election-year politics, saying they haven’t read the bill yet, arguing that it’s unnecessary and downplaying the threat of Supreme Court reversal – despite Justice Clarence Thomas suggesting in a concurring opinion in the Dobbs v. Jackson case that stripped from women the right to abortions, that future cases “should reconsider all of this Court’s substantive due process precedents,” including, he wrote, those that protect contraception, same-sex relationships and same-sex marriage.

GOP Sen. Marco Rubio of Florida called it “a stupid waste of time.”

Baldwin says she’ll nab 10 Republican votes by the time the bill is called to the chamber floor. As of Wednesday, she had at least five GOP commitments, but it was unclear where the others would come from.

“I don’t want this to be politicized,” she told reporters Tuesday. “But we’ll do it when we have the votes and the time.”