Sen. Tommy Tuberville falsely accused Democrats of wanting reparations for people who “do the crime” 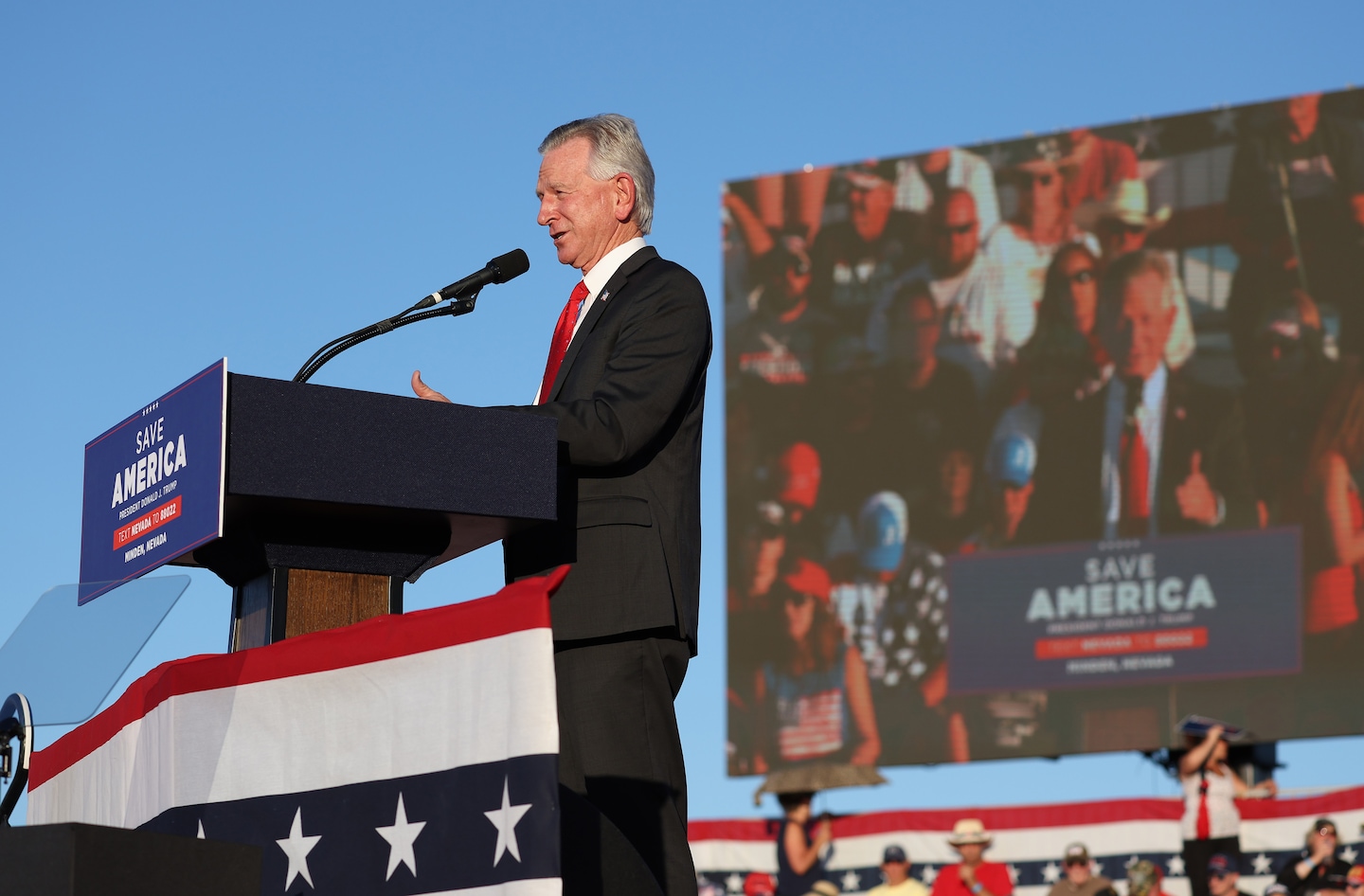 Sen. Tommy Tuberville (R-Ala.) falsely claimed that Democrats are “pro-crime” and support reparations for Blacks whose ancestors were enslaved because those who “do the crime” are owed — a remark that has generated accusations of racism and criticism as dishonest.

Speaking at a rally in Minden, Nev., on Saturday headlined by former president Donald Trump, the senator and former football coach dismissed the oft-repeated Republican claim that Democrats are “soft on crime” and made the baseless statement that Democrats are “pro-crime.” Tuberville and Trump were campaigning for Nevada’s GOP candidates ahead of the November midterm elections.

Although a handful of Democrats in Congress have expressed support for reparations for Black Americans who descended from people enslaved in the United States, the Democratic Party as a whole does not support the idea. House Democrats have backed a bill that would create a commission to study reparations, but there has not been enough support in the Senate from Democrats or Republicans for the legislation. As a result, some prominent Democrats have encouraged President Biden to sign an executive order that would create the commission.

While Biden has not signed an executive order, he backed plans to study reparations while campaigning for president in 2020, a position he has maintained since he took over the presidency.

Tuberville and most Republicans contacted by The Washington Post were silent about the comments Monday.

But Rep. Byron Donalds (Fla.), one of the two Black Republicans in the House, defended Tuberville by suggesting that Ariel Atkins, a Black Lives Matter Chicago activist, shares the lawmaker’s view. While some Democratic leaders denounced criminal activity in response to the May 2020 death of George Floyd, a Black Minneapolis resident, Atkins argued that looting is a form of reparations.

“That is reparations,” Atkins added. “Anything they want to take, take it because these businesses have insurance.”

Donalds blamed liberal lawmakers for this type of criminal activity and argued that Tuberville has a record of caring more for Black people than members of the opposing party do.

“Crime is top of mind for Americans due to soft-on-crime policies and progressive prosecutors in liberal cities,” he told The Post on Monday. “As a coach and mentor to countless Black men, Tommy Tuberville has done more to advance Black lives than most people, especially in the Democratic Party.”

But Bakari Sellers, an activist and civil rights lawyer, criticized Tuberville for building his wealth as Auburn University’s head football coach from 1999 to 2008 while Black young men risked their health under his leadership.

“Tommy Tuberville can go to hell, and let me tell you why,” Sellers said on CNN. “The fact is, he made tens of millions of dollars off unpaid Black men as a football coach.

“He literally has the stature he has because people went out there and assumed the risk and incurred the risk of concussions, playing hard and everything,” he added.

“His comments are the most vicious, vile, repugnant, parochial, racist thing I’ve heard in a long, long time,” Mfume said on MSNBC. “People take that — the sick ones — and they figure that they have to do something to extend the senator’s philosophy.

“I would hope that every elected official on both sides of the aisle condemns that,” the lawmaker added. “He is a bigot. And until he says something different, he will always be seen as a bigot.”

The Nevada State Democratic Party called Tuberville’s remarks racist and “nothing less than monstrous” — and condemned the GOP for not speaking out against them.

“The refusal of Republicans — including those in our own state — to condemn this malignant bigotry is yet another example of how corrupted the GOP has become by extremism and hate,” spokesman Gordon Brown told The Post.

The party also pushed back on Tuberville’s suggestion that reparations are a harmful policy idea, given the inequality between Black and White Americans that began during slavery.

“Reparations are a long-awaited and long-overdue step to addressing the injustices and inequity experienced by Black Americans after centuries of slavery and segregation,” Brown added. “The Nevada State Democratic Party proudly and unapologetically calls for reparations and supports all efforts to deliver on America’s promise of true equality and enduring justice.”

NAACP President and CEO Derrick Johnson condemned Tuberville’s comments and highlighted criminal activity by some Trump supporters. More than 900 people protesting the results of the 2020 presidential election have been charged with crimes linked to the Jan. 6, 2021, insurrection at the U.S. Capitol.

“Senator Tuberville’s comments are flat-out racist, ignorant and utterly sickening,” Johnson said Monday in a statement. “His words promote a centuries-old lie about Black people that throughout history have resulted in the most dangerous policies and violent attacks on our community. We’ve seen this before from the far right, and we’ve seen what they can do when they take power.

“Next time the senator wants to talk about crime, he should talk about Donald Trump’s hate-fueled rally on January 6, 2021. Perhaps the real criminals are in his orbit,” he added.

The campaign committees for the two parties had no immediate comment Monday.