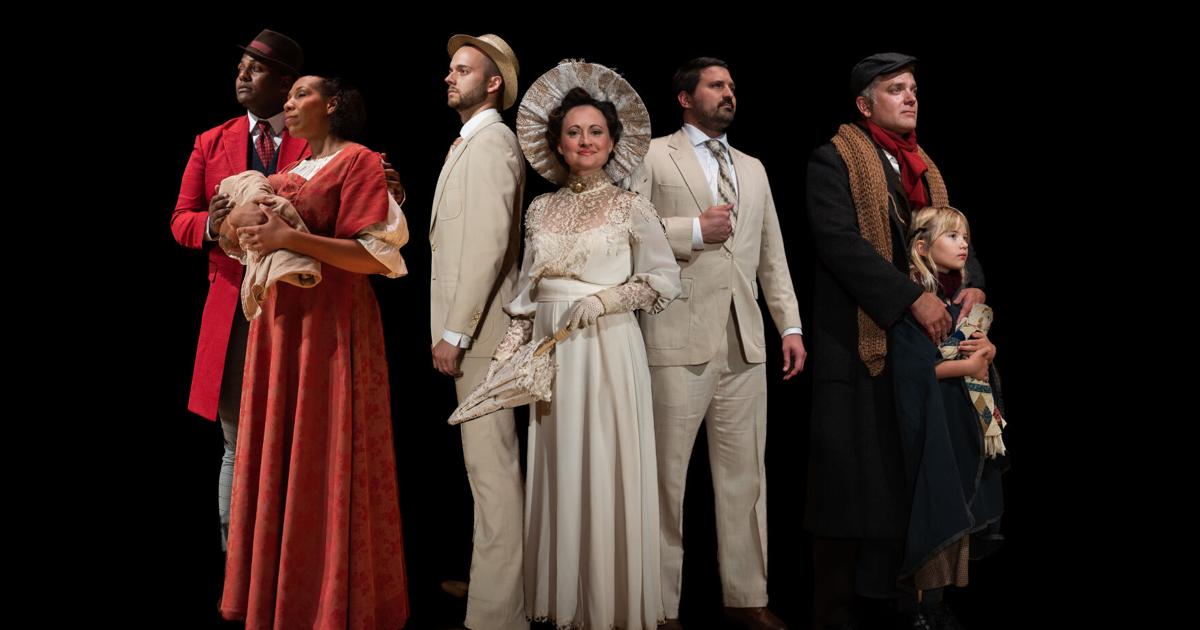 While “Ragtime” is set in the early 20th century, its plotline sounds straight out of 2022.

The show follows diverse communities, from African Americans to immigrants, women to the working class, as they pursue the American dream and come face to face with prejudice and injustice.

“Though this story takes place more than a hundred years ago, it’s still so incredibly relevant and compelling,” says Johnathan Bauer, the theater’s executive director. “At Servant Stage, we look for shows that will inspire, educate, challenge and entertain, and ‘Ragtime’ does all that.”

“Ragtime” is based on E.L. Doctorow’s 1975 novel of the same name, which was adapted for the stage in 1996 with music by Stephen Flaherty, lyrics by Lynn Ahrens and a book by Terrence McNally.

And when Bauer’s team decided on “Ragtime,” they decided to do it big.

“This is an epic production on every level, full of pageantry, large production numbers, stunning set design and gorgeous period costumes,” Bauer says.

There is a real Model T Ford and jazz piano on stage. A turntable set moves the action with a feel of a massive carousel with a fashion show of some 200 period costumes that range from grand white lace gowns and stylish suits to ragged clothing of poor immigrants.

But the show’s plot is just as grand. Its fictional characters navigate a rapidly changing world, including real-life tycoons exerting their power, Jewish immigrants seeking a new start in life, women trying to find their place, workers standing up for their rights to safe working conditions and African Americans who continue to face prejudice and impediments to equality.

The high society “crime of the century” took place in June 1906, when millionaire Thaw killed famed architect Stanford White in a jealous rage over his past relationship with Thaw’s stunning wife, Nesbit. The sensationalism of the trial dominated the nation’s headlines for more than a year.

“You can see that in 2022, we are still dealing with many of the same issues, like crime and prejudice and human rights, that affected people in the early 1900s, but on a different level,” Bauer says.

There are moments of hope and promise too, as Coalhouse Walker Jr. sings to his beloved Sarah about life “on the wheels of a dream” where “the times are starting to roll, any man can get where he wants to, if he’s got some fire in his soul.”

Sadly, those hopes are dashed against the reality of enduring racism and prejudice. Walker Jr.’s hope turns into revenge.

“The music of ‘Ragtime’ is incredible,” Bauer says. One of his favorite songs is “Our Children,” which tells of the bond between the young children of the elegant New Rochelle Mother and Latvian immigrant Tateh.

As the two parents brought together by fate watch their youngsters on the beach, they sing, “Children run so fast … toward the future … from the past. How they dance, Unembarrassed and alone. Hearing music of their own.”

With its anthem to the American Dream, “Ragtime” strives to keep the promise of the future alive. Even as he faces defeat, Coalhouse Walker Jr. looks to a better future for his young son, telling his followers to “Go out and tell our story, Let it echo far and wide, Make them hear you … .”

Success! An email has been sent with a link to confirm list signup.

Error! There was an error processing your request.

Supreme Court to debate claims of racial gerrymandering in Alabama

Politics and politicians change, the League of Women Voters’ mission does not