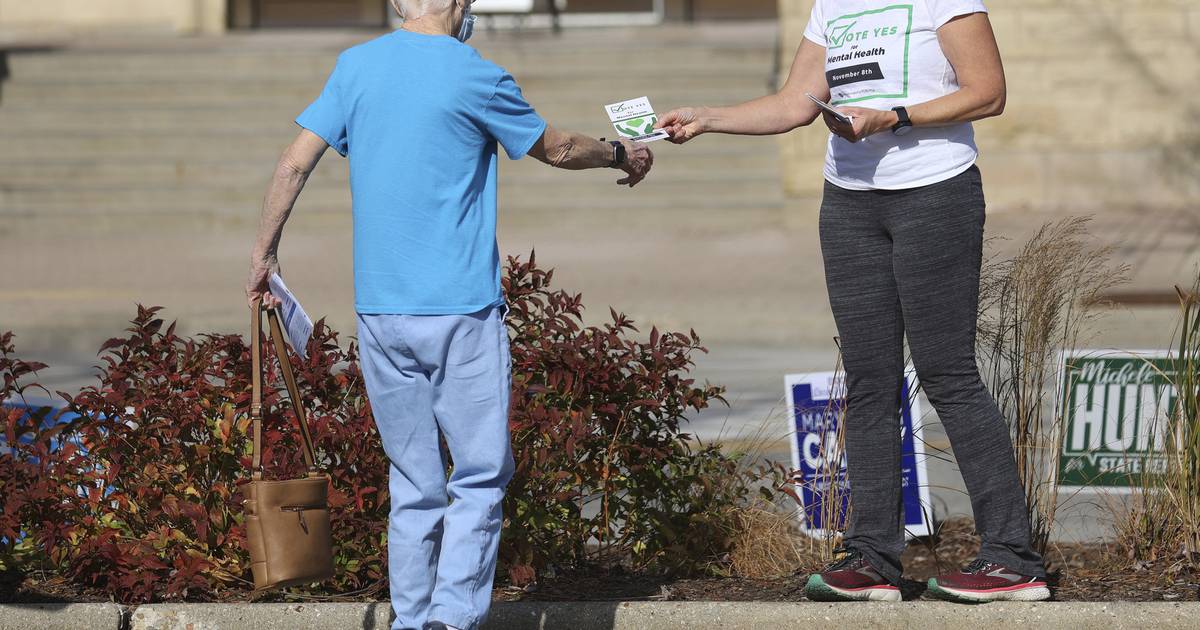 Some suburban voters in Tuesday’s election will be asked if they want to pay for better mental health services in their communities.

Addison, Naperville, Lisle and Winfield townships in DuPage County; Schaumburg and Wheeling townships in Cook County; Vernon Township in Lake County; and all of Will County will hold referendums on whether to establish property tax levies to fund services for mental health, developmental disabilities and addiction.

It’s a question that Lorri Grainawi, a League of Women Voters of Illinois mental health specialist, has taken personally since the death of her 24-year-old son, Adam, in 2016, when he was struck by a train.

Adam battled schizophrenia for years. He had no case manager or social worker to help him follow his recovery plan. His mother believes his death was accidental but might have been prevented with follow-up services. She knows other families that went through similar tragedies, and some that got more help and are doing well.

A community mental health board, like those proposed by petition in Tuesday’s election, would provide grants to local agencies to provide such potentially lifesaving services. Some 90 existing mental health boards in Illinois pay for things like drop-in crisis centers, screening youths for mental illness, and social workers who help police departments deal with people in mental crisis.

Dan Patlak, president of the Republicans of Wheeling Township and former township assessor, said suburbanites pay too much in property taxes. Local governments in Illinois had the second-highest property tax rate among all states, according to WalletHub.

Similar to some other townships, Wheeling Township already gives about $575,000 in grants to social service agencies, much of it for behavioral and mental health and intellectual disabilities, Patlak said.

“A lot of people including myself are sympathetic to the idea that mental health problems are serious and need to be addressed,” Patlak said. “Better to reallocate money that’s already out there, than to tax people further and hurt their ability to support their families, and for businesses to stay and employ people.”

The proposed tax increase is small compared with most other governmental units, such as schools. Under state law, referendum proposals for mental health boards have a maximum property tax rate of 0.15%,. but such boards typically tax at a lower rate. Advocates in Wheeling Township are calling for a tax rate of 0.026% to raise $1.5 million, for an estimated tax of roughly $28 on a home worth $335,000.

In Milton Township, voters narrowly approved a mental health board in 2021. Geri Kerger, executive director of the National Alliance on Mental Illness in DuPage County, said her tax bill for the board was $21 for the year.

But any mental health board would be appointed by the township supervisor, and nobody knows what tax rate they’ll settle on, Patlak said. If they choose the maximum rate in Wheeling Township, he calculated, the tax bill for the average home would be much higher, at $151, or for a business, $375.

In Illinois, thousands of people with developmental disabilities are on a yearslong waiting list for services.

Nationally, 14 million people had serious mental illness in the past year, and 40 million had a substance use disorder — but only a fraction of those got help for those problems, a federal survey found.

Not coincidentally, overdose deaths have skyrocketed, and the rate of suicide nationally rose 4% in 2021, to about 48,000 people — more than twice the number of homicides — with the increase most pronounced among young adults.

Kerger said the nation is in a mental health crisis that was only made worse by the COVID-19 pandemic. But she said programs funded by mental health boards include recovery specialists who can help people form a recovery plan and connect them with the services to do so.

The National Alliance on Mental Illness’ educational programs in high schools, she said, include people living in recovery from substance abuse or mental illness.

“Kids know people who are ill, and think there’s nothing to be done,” Kerger said. “They give you hope to recover.”