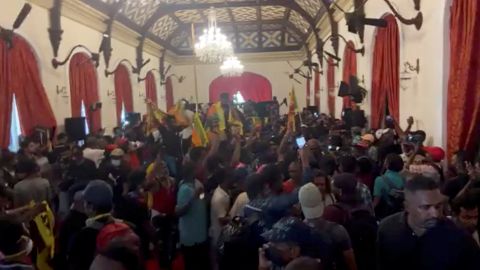 Protesters broke into the Sri Lankan leader’s official residence in Colombo on Saturday as more than 100,000 amassed outside, according to police, calling for President Gotabaya Rajapaksa to resign over his handling of the country’s economic crisis.

Images show demonstrators inside the building and hanging banners from the balcony, as well as swimming in the residence’s pool.

Rajapaksa is not at the site and has been moved elsewhere, security officials told CNN. It is unclear how many security personnel are present at the location.

At least 31 people, including two police officers, have been injured in the protests and are receiving treatment, according to the National Hospital of Sri Lanka (NHSL). Two of the injured are in critical condition, according to police.

Meanwhile, Prime Minister Ranil Wickremesinghe has called an emergency meeting of party leaders to discuss the current situation and come to a resolution, his office said on Saturday. He’s also asked the Speaker of Parliament to summon MPs.

A police curfew that was earlier imposed in several police divisions in the Western Province of Sri Lanka was lifted on Saturday. Several politicians and the Bar Association in Sri Lanka referred to the curfew as being “illegal,” saying there had been no instances of violence to justify imposing the measure.

Tens of thousands have taken to the streets in recent months, calling for the country’s leaders to resign over accusations of economic mismanagement.

In several major cities, including Colombo, hundreds are forced to queue for hours to buy fuel, sometimes clashing with police and the military as they wait.

Images from Colombo paint a chaotic scene, with pictures showing demonstrators running from tear gas, and clashing with police in body armor.

Schools have been suspended and fuel has been limited to essential services. Patients are unable to travel to hospitals due to the fuel shortage and food prices are soaring.

Trains have reduced in frequency, forcing travelers to squeeze into compartments and even sit precariously on top of them as they commute to work.

Wickremesinghe said the country had entered talks with the International Monetary Fund (IMF) to revive the country’s economy.

This week, he told parliament that talks with the IMF were “difficult” as they entered the discussion as a “bankrupt” country, rather than a developing one.

Herschel Walker denies paying for a girlfriend’s abortion in 2009