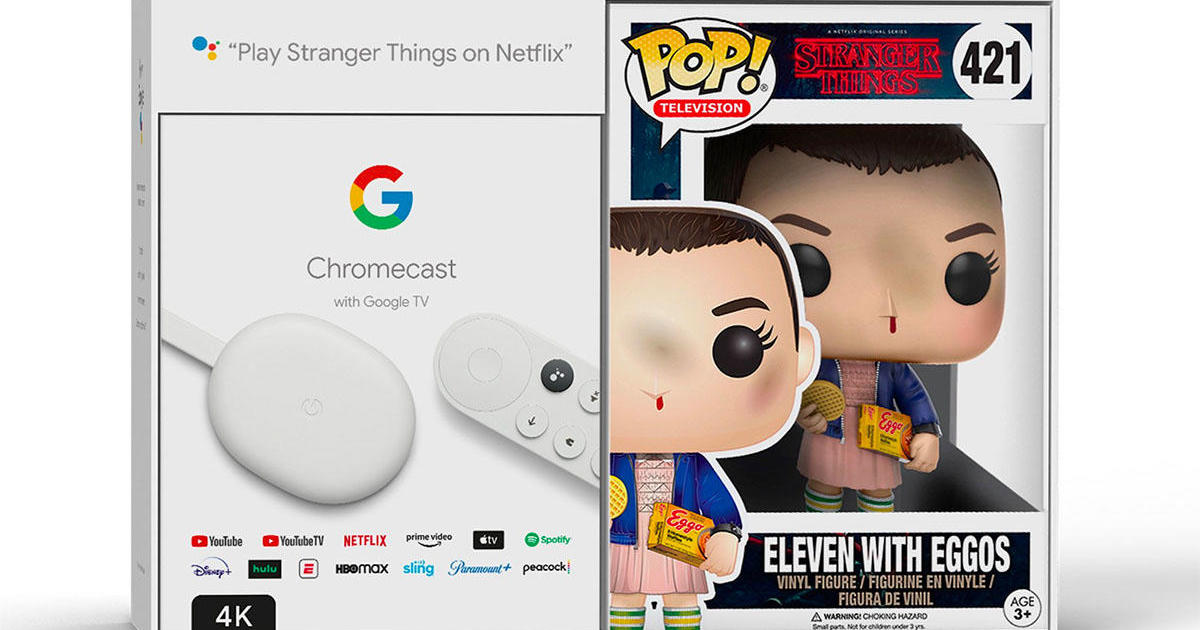 Google Chromecast streamers normally retail for $50, so this is your chance to save $21 and get a free “Stranger Things” Funko Pop! figure along with it.

Hurry — a new batch of deals is coming tomorrow, which means today could be your last chance to score these must-see Black Friday deals.

Here’s your opportunity to put a brand new gaming console under the Christmas tree and save money while doing it: You can get a the all-digital Xbox Series S Holiday Edition console for $249 at Walmart’s Deals for Days Black Friday sale. Tap the link below to score the deal while you can. (Hurry — it won’t last.)

This smart robot vacuum uses floor-tracking sensors to clean in neat rows. The home gadget’s multi-surface rubber brushes auto-adjust to different floor types and avoid getting tangled with pet hair. This robot vac also empties on its own. The iRobot Roomba i1+ comes with an iRobot Clean Base Automatic Dirt Disposal that allows the i1+ to empty itself for up to 60 days.

Connect your iRobot Roomba to Wi-Fi to control it remotely via the iRobot app.

“I absolutely love my iRobot,” wrote a Walmart customer who purchased the device. “This is literally life changing. I have a dog that sheds A LOT. I used to have to vacuum everyday to keep up with all my dogs hair on the floor. Now I just run my iRobot everyday and it saves me so much time and energy. This vacuum is so easy to use. You literally press one button on the machine to turn it on or you can use the app on your phone. It navigates around your house on its own and maps your floors so that it remembers where to clean the next time. The vacuum goes to the tower and empties itself when it’s full and it also charges on its own at the base.”

The robot vac is $242 off during Walmart’s Black Friday sale, Deals for Days.

It’s not every day you find 20 kitchen essentials for $1 each. But that’s what The Pioneer Woman is offering at Walmart for Black Friday right now.

Don’t delay on this one: One design has already sold out online (though you can still find limited quantities in local stores), and the Fancy Flourish design seen here likely will too before Black Friday is over.

It includes 19 kitchen essentials. When you shop this Walmart Black Friday deal, you’ll get a 2.5-quart saucepan, a 5.5-quart Dutch oven, a skillet, a mini skillet and a cast iron skillet, an Acacia wood spoon, an Acacia wood turner, a 4-piece melamine measuring cups set, a 4-piece melamine measuring spoons set and a 12″ x 8″ ceramic baker with a lid.

This inexpensive 4.6-star-rated TV from LG features 4K resolution, virtual surround sound, a “game optimizer” setting and active HDR for a stunning picture. This TV is a good choice for those who have a Google-based smarthome — it works with “Hey, Google.”

Walmart is rolling back the price of the Apple iPad Air 5 for Black Friday.

Introduced in 2022, the 10.9-inch Apple iPad Air 5 is the latest in the lightweight iPad Air line. The iPad Air 5 offers performance up to 60% faster than the prior model, thanks to Apple’s turbo-charged M1 chip. The device boasts a 12 MP wide-angle back camera that supports 4K video. It also offers touch ID, and Apple’s Liquid Retina display.

The Apple Watch Series 8 is a durable smartwatch that is swim-proof, dust-proof and crack-resistant. It also comes with a new crash detection feature, which detects when the wearer is in a severe car crash and alerts emergency services of their location.

The Apple Watch 8 has a number of health-tracking features, including an optical heart sensor, electrical heart sensor for ECG, blood oxygen sensor and a new body temperature sensor. You can also tap into yoga, meditation and other workout programs via Apple Fitness+. (Apple Fitness+ is a subscription service. It costs $9.99 a month; Apple Watch buyers get the first month free.)

This digital air fryer has 19 one-touch cooking functions, including air fry, bake and dehydrate. It has a touchscreen and a preheat option. It’s large enough to prepare a full 12-inch pizza or toast up to six slices of bread at a time. The best part is that it’s currently only $50.

Each 4-quart basket has its own temperature settings (up to 400ºF); its crisper plates are dishwasher-safe. You can also use the Ninja Foodi 4-in-1 to roast, reheat and dehydrate.

The 65-inch LG OLED TV from the C1 series is discounted a whopping $650 during Walmart’s Black Friday sale.

Unlike LED and QLED TVs, OLED TVs don’t have a backlight layer. Instead, each pixel is its own teeny-tiny LED light that can independently adjust luminosity and even turn off completely. Because each pixel functions independently, the TV offers elite image quality — and the darkest shadows. OLED televisions also tend to be ultra thin. This particular LG set measures just 1.8 inches thick. It features 4K upscaling, plus built-in Google Assistant and Alexa.

Whether you’re streaming, doing schoolwork or playing light mobile games, this 14-inch HP Touch Chromebook is an excellent choice. This lightweight 2-1 device features a 14-inch HD touchscreen display. The touchscreen can be used on its own as a tablet, but the device also operates as a Chromebook with a keyboard. It features duel speakers for audio and is compatible with Google voice assistant.

Whether you’re streaming, doing schoolwork or playing light mobile games, this 11.6-inch HP Chromebook is a great, inexpensive chromebook option. The device has metal reinforce corners and is 122cm drop-tested, so it’s a durable option if you’re looking for a Chromebook to take on the go or to gift to a young student.

At $79, it’s an unbeatable deal for a Chromebook from a respected brand.

If you’re looking for an affordable tablet this holiday season, check out the Lenovo Tab M8. The tablet offers an eight-inch HD display that’s great for streaming videos. The battery life is fairly long, with up to 15 hours of video playback on a single charge. The tablet also comes with a built-in kids-mode with Google Kids Space, making it a great gift for children.

The Apple AirPods Pro are a CBS Essentials bestseller. Our readers love the AirPods Pro for their active noise-cancellation tech, well-fitting design and great sound quality. They’re water-resistant, as well, and offer up to 24 hours of battery life with the included case.

Now on sale at Walmart for $159, the older model of the Apple AirPods Pro offers a great deal.

This 4.0-star-rated Dyson vacuum is great for households with pets — and humans with long hair. According to Dyson, its “detangling Motorbar cleaner head deep cleans carpets and hard floors with hair removal vanes that clear long hair and pet hair from the brush bar.” It also has a hair screw tool with a conical brush bar that’s great for cleaning upholstery and pet beds. Its whole-machine filtration captures pet allergens and fine dust. And if that isn’t enough, it also transforms into a handheld vacuum.

The top-rated Galaxy Tab A8 offers a 10.5-inch LCD display, 32 GB of storage and fast-charging capabilities.

Now on sale at Walmart for $139, the Galaxy Tab A8 is a great budget tablet for gifting.

The system includes a food processor equipped with a chopping blade, and an extra dough blade that Ninja says can mix up to two pounds of dough in 30 seconds.

This Wi-Fi-compatible robot vacuum can be controlled by your smartphone or voice assistant.

This slim robot vacuum’s powerful 200 Pa suction operates quietly, at about the same volume as a working microwave. It automatically increases suction when extra vacuuming is needed and features an infrared sensor for evading obstacles and drop-sensing tech to avoid falls.

Looking for a more traditional Bissell upright vacuum, one that’s ideal for trapping pet dander and other allergens? Walmart is currently offering a great deal on this multi-surface wet dry vac. The Bissell CrossWave Pet features a tangle-free pet brush roll and a pet hair strainer that keeps all that shed fur from clogging up your machine.

The Samsung Galaxy Live earbuds are available at the deepest discount we’ve seen this holiday season. Samsung designed these earbuds with 12mm speakers and a form factor that allows them to deliver spacious sound quality, resulting in an immersive, concert-like experience. Fans of live shows may want a pair.

This budget-friendly HP color printer offers scanning, copying and mobile printing functionality. Get a free six-month ink subscription for it, when you activate a free HP+ plan.

This compact streaming device lets you stream your favorite shows and movies from streaming services like Paramount+.HBO Max, Netflix and more in 4K. The Roku interface is fast and easy to navigate. Right now, you can get this device for only $30.

While there’s still some time to wait until the official Black Friday 2022 sales start, there are plenty of great deals you can get right now. Check out our early Black Friday deal articles.

What is Walmart Deals for Days?

Deals for Days is Walmart’s annual early Black Friday sale. The sale is on now, and Walmart will release a new batch of deals every Monday through Nov. 28. Each week, Walmart+ members will have exclusive early access to shop the new deals for seven hours before the deals are made available to the public.

We’ve compiled the top deals from the first week of Deals for Days to help you cut through the clutter and get straight to the biggest discounts and best products.

Be sure to check back each week for a new list of deals from Walmart.