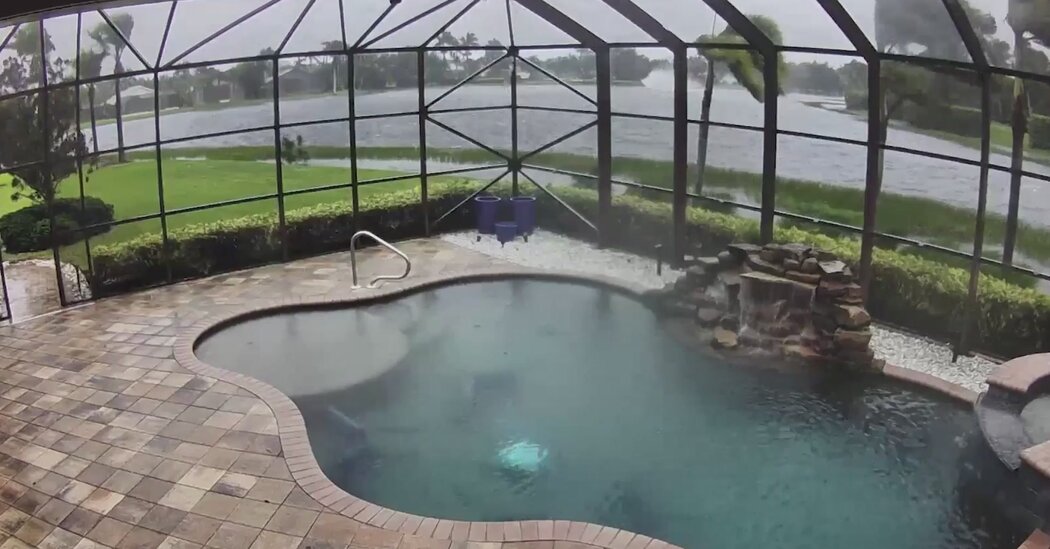 Hurricane Ian’s menace sent homeowners around Florida scurrying to safer parts while their technology stood sentry. Home camera security systems served as the unflinching eyes and ears for anxious people whose homes were in the storm’s wide and teetering path.

The combination of sights and sounds captured by the popular systems forged the strangest feeling, both destabilizing and reassuring at the same time: From other parts of Florida or other states altogether — or even from the windowless interiors of their homes — homeowners watched one of the most powerful storms to ever strike Florida as a kind of ominous theater.

Ian’s fury carved a path of ruin that is difficult to comprehend even for those who have experienced other powerful hurricanes. The number of dead has climbed to about 80, and rescuers are still clambering through the wreckage searching for survivors in the hardest hit areas along the south western coast.

Unlike the astounding images of flattened and flooded neighborhoods flickering across television or social media, the images from home security cameras were intensely personal and random, ranging from what felt like a common rain shower to hurricane force destruction.

Some homeowners watched pieces of their lives float by, and storm surge swallow cars. They saw beloved fruit trees ripped from the ground, and wildlife take refuge on their porches and fight against the currents in their driveways.

And still others watched nothing more than palms rippling like flags in front of homes only lightly touched by the storm.

The worst of the damage may not have been watchable from afar. Security camera live streams work as long as they have a power source and internet connection. Some systems offer backup options, but when the power went out, many homeowners were left to wait and wonder. Nearly 600,000 homes in Florida are still without power.

“For what felt like a long time, everything seems OK. Then all of a sudden, I could see stuff flying through the air, branches and debris,” said Tammy Renee Frechette, 53, who used the Blink app on her cellphone while she was in Illinois to monitor her two-bedroom apartment in Port Charlotte, Fla. Her husband evacuated to their daughter’s home about 15 minutes away. “And then the power went out and I was stuck without any idea of what was happening with my family or to my home or even if I would have a home to go come home to.”

It turned out the apartment building’s roof was badly damaged but escaped the worst of the storm’s wrath. “It was the waiting that was so hard,” Ms. Frechette said. “Not knowing was terrifying.”

Paul Hirt and Linda Jakse watched Hurricane Ian pummel their home in Venice, Fla., from sunny Arizona. Both retirees, they live most of the year in Arizona and spend winters in Florida closer to family.

Through the side angles of their Ring camera, the couple saw their neighbors’ homes flood and the aftermath as the sun came out Friday morning. They saw fallen trees, people kayaking down their block and someone driving an SUV through more than three feet of floodwaters. They even saw an otter swimming through the storm surge in their front yard.

“We were glued to our video cameras watching all of it,” Mr. Hirt said. The floodwaters submerged the road in front of their house, then their neighbors’ driveways, then their own yard, where it lapped against their front porch. “A feeling of dread settled in because we had no idea how much higher the water would rise and how long it would remain,” Mr. Hirt wrote in a post on the Neighbors app, a social media site where people can post and discuss video captured by their security cameras.

Ring said that in the 24 hours around when the hurricane hit, Floridians posted millions of times — almost 10 times the normal volume — in the company’s app, where customers share videos and information. Most were safety-related posts, like sharing utility outages.

Mr. Hirt and Ms. Jakse consider themselves incredibly fortunate: Their home, which was built several feet higher than their neighbors’ homes, remains unscathed. But the house next door will have to be gutted. And although much of the area still has no power, the couple’s home runs on solar panels and a battery system that is separate from the energy grid.

“We’re kind of the electric plug now for the neighborhood,” Ms. Jakse said. “Tomorrow, several of our neighbors are coming over to use our washer and dryer because we have hot water. They’re plugging in their phones.”

As the storm approached, Rick Rice and his wife, Nancy Wood, prepared their home in Estero, Fla., about 20 miles south of Fort Myers. They bought 14 bags of mulch to seal their garage, they set up a flashlight station in the kitchen, and they pulled blackout shutters down over their windows and doors. Before securing their fortress, the couple ushered in three friends — Bobby, Sheri and Linda — and their pets, who all needed a safe place to stay.

With the hurricane winds howling outside and the rain pounding the roof, the group gathered around Mr. Rice and Ms. Wood’s 65-inch television. Their only view of their immediate surroundings came from the couple’s three security cameras.

“It was absolutely surreal,” Mr. Rice said. The cameras “helped us feel less claustrophobic because we weren’t so much in a dungeon.”

In Orlando, Taryn Schmidt, 29, watched Hurricane Ian on her phone from the safety of her in-laws’ home, a little farther west. She is a South Florida native, and this was far from her first hurricane, but it was her first as a homeowner. She checked on her house every hour or two through the home security app on her phone.

“I could see just leaves blowing. I could see the trees swaying kind of across the street. Some rain, obviously,” Ms. Schmidt said. “Nothing really out of the ordinary except the peacocks.”

For at least two hours during the peak of the storm, a band of peacocks sheltered under her front porch. About 30 wild peacocks roam Ms. Schmidt’s neighborhood.

Before the storm, Ms. Schmidt had readied their home as best she could: She piled sandbags by the doors, laid towels by windows to absorb any water, and pulled the potted plants and outdoor furniture into the garage. She even burned her yard clippings to keep them from blowing around. Her husband, Sam Burns, was in New Orleans on business, and she was nervous that the four old oak trees in her yard would drop limbs on her home.

In the end, Ms. Schmidt’s home had some water seep through the windows and some downed branches, but she considers herself lucky. As she rode her bike through her neighborhood the next day, she saw completely flooded streets, people without power, downed trees and even a sinkhole with a Mini Cooper wedged in it.

As the storm approached, Suzette Stoutenburg and her husband, Greg, boarded their windows and covered their screen porch with “hurricane fabric,” a seal that protects against wind and rain. Those were necessary moves, but they were not appreciated by their two golden retrievers, Sophie and Finley. “They’re not used to seeing the house darkened like that. They didn’t like that,” Ms. Stoutenburg said.

Through her tablet, she watched the wind whip through her palm trees and the floodwaters swallow her garden. When she saw her herb garden begin to float away, the couple raced outside to tie it up.

“It was really nerve-racking” to watch the storm this way, Ms. Stoutenburg said. “Most of the day I was stressed.”

Still, she says she never felt her home was truly in danger. The couple spent the days leading up to the storm worrying for family in Tampa, where the worst of the hurricane was projected to hit. But as the storm changed course, it was the Stoutenburgs who ended up with the flooding and damage.

So far, the damage to their home seems light. Their back garden was so flooded that they will lose almost all of their plants. They are still unable to check on their boat, which is secured in their boathouse just steps from their home, because the four feet of dirty floodwaters may have snakes or gators.

“But that’s nothing compared to what others are going through,” Ms. Stoutenburg said. “We’re really grateful.”