Studying California’s Storms From Above 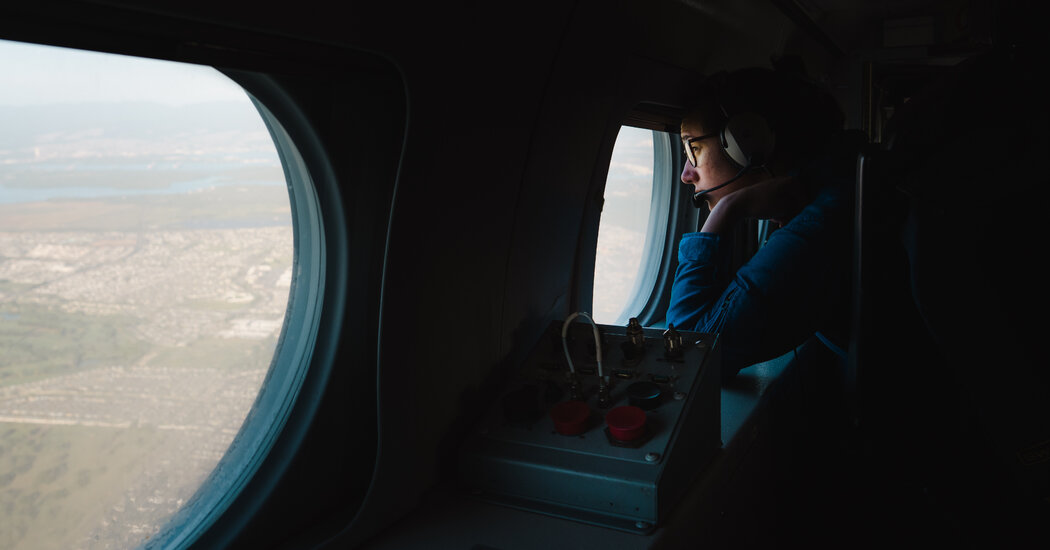 ABOARD A GULFSTREAM IV, over the Pacific — The winter storms pounding California this month have often come into being thousands of miles to the west, in the moist air above the Pacific.

That has given a group of scientists and technicians a few days before one blows ashore to examine satellite readings, run computer models and plan crews and equipment, all of which culminates in a uniquely full-contact effort to understand these storms’ inner workings: By dropping sensors into them from the sky.

This week, aboard a Gulfstream IV jet that was streaking toward Alaska as a giant storm seethed miles below, an engineer gave a quick countdown: “Sonde’s out in 5, 4, 3, 2 …”

A hatch in the plane’s belly sprang open. The sonde, a tube of instruments about the size of a model rocket, was sucked out into the frigid air and began plummeting toward the clouds, where it would investigate the storm’s innards and transmit its findings to the world.

Atmospheric rivers have caused weeks of flooding, power outages and evacuations up and down California and killed at least 18 people. But the devastation would almost certainly be even greater were it not for the weather forecasts that roll in before each storm. Emergency responders, dam operators and farmers now have piles of rapidly updated information at their fingertips about where these storms are headed, how soon they might arrive, and how much rain and snow they could bring when they get there.

Assembling those predictions still begins, however, by getting close to the action. The West Coast’s atmospheric rivers spend their early days over huge, empty expanses of the Pacific. No network of weather stations is collecting detailed information about their approach, as is possible for storms traveling over land. Clouds can obstruct satellite measurements, and drifting buoys mostly gauge conditions near the ocean’s surface.

A program called Atmospheric River Reconnaissance, or AR Recon, is trying to plug this data void. It is led by scientists at the Center for Western Weather and Water Extremes, part of the Scripps Institution of Oceanography at the University of California, San Diego.

AR Recon is partly a research initiative, but since 2019 it has also been part of the federal government’s winter meteorological operations, with support from the Air Force and the National Oceanic and Atmospheric Administration. This winter, AR Recon started flying missions earlier than ever, in November, to sample more of the early-season storms that have caused devastating flooding on the Pacific Coast in recent years.

Rain and Floods in California

For weeks, a string of major storms have hit California, causing extreme flooding and damage across the state.

The data these planes gather is part of a series of advancements in weather forecasting and the computer models behind it.

Richard Henning, a NOAA flight meteorologist who serves as a flight director with AR Recon, has flown research missions with the agency and Air Force for nearly 30 years. He used an analogy to describe how well weather models predicted the future back then: If you asked them what an acorn would look like someday, their answer would essentially be “a much bigger acorn,” he said.

Today, they would show you an oak tree. “That’s literally the difference in the sophistication of the models.”

Still, the reliance on crewed flights means this high-tech work can hit low-tech snags. In December, the Gulfstream IV had to be sent to St. Louis to fix a fuel indicator, forcing AR Recon to cancel several flights in the week before an atmospheric river hit California late last month.

The next storm, on New Year’s Eve, was forecast to be moderate in Northern California. But it ended up stalling and dumping buckets of rain over a stretch of the region. At least three people died in the flooding. San Francisco nearly broke its record for single-day rainfall.

One reason the predictions were off, according to Michael Anderson, California’s state climatologist, might have been that AR Recon hadn’t flown the week before. The program was on a scheduled holiday break.

Scientists are still trying to better understand the features that can cause atmospheric rivers to intensify at the 11th hour, Dr. Anderson said. “Getting better at being able to forecast those, and getting the detail down to the watershed scale, is really where we want to get to.”

F. Martin Ralph, a Scripps scientist who helps lead AR Recon, acknowledged that although the program got an early start this winter, it didn’t have the staff, funding and aircraft availability to collect data during the holiday period. “Now we’re learning the lesson, sadly, that we really should aim to have full coverage” of the rainy season, he said.

Each AR Recon flight begins with scientists and officials convening virtually and in a San Diego conference room to draw up a plan of attack. It was Wednesday. Another river of moisture was barreling toward California. A big one.

With only three aircraft at their disposal — the NOAA Gulfstream and two Air Force C-130s — the mission planners have to be strategic. They conduct analyses to determine where extra data from inside an atmospheric river might be most useful for improving forecasts, then they chart flight paths to hit those spots economically.

With the forecasts before any storm, “very small errors have the potential to grow to make a precipitation forecast really off,” said Anna M. Wilson, a scientist at Scripps and AR Recon’s mission director for the past week.

Early the next morning, a small team from NOAA, plus a reporter, a photographer and another scientist from Scripps, set off in the Gulfstream from Honolulu.

The mission: fly roughly 1,500 miles almost straight north, toward the Aleutian Islands in Alaska, before doubling back. This would allow the plane to cross two separate sections of the atmospheric river’s moisture-laden core as it swept east. And flying at an altitude of 41,000 feet to 45,000 feet would let the plane sample both the storm itself and the jet stream, whose powerful winds help shape the system’s course. Total flight time: about eight hours.

The NOAA Gulfstream, nicknamed “Gonzo,” is mostly kitted out for science, with a few concessions to the needs of crews spending long hours in close quarters. There are jugs for water and coffee, plus an icebox. Snacks aren’t provided, though the plane has a microwave for heating up food brought aboard. Squeezed into its rear is an even more cramped version of a commercial jet’s lavatory.

Heavy racks of gear have been installed throughout the cabin with artful efficiency. A tail-mounted Doppler radar estimates how quickly the moisture is moving below. A GPS receiver measures how much satellite signals are refracted in the air to estimate the properties of the atmosphere around the sides of the plane.

Then there are the sondes, which cost about $800 each. The crew dropped more than 30 of them during Thursday’s flight, spacing them out to sample a wide section of the atmospheric river.

The data is transmitted to a global repository that feeds weather forecasts around the globe. But the first to see it are the onboard meteorologists, whose screens dance with colorful squiggles representing wind speed and direction, temperature and humidity — each sonde’s proof of life during its unimaginably chaotic 15-minute dive toward the sea.

Information from the sondes has begun to prove its value for making atmospheric river forecasts more accurate. Scientists have used the same computer model to generate one forecast that incorporates the data and another that does not, then compared both of them with a storm’s real-world effects. In some cases, they have found improvements in forecasts of up to 25 percent.

“That is unheard-of,” said Vijay S. Tallapragada, a senior scientist with NOAA’s Environmental Modeling Center who helps lead AR Recon. “If you look at the history of forecast improvements for precipitation, they were stagnant for the last 20 years.”

At the G-IV’s high cruising altitude, the serene blue skies struck an odd contrast with the unseen turmoil beneath the clouds. Luca Delle Monache, a scientist at Scripps, explained how artificial intelligence might someday improve forecasts even more. By scouring data on the mistakes a model had made in the past, A.I. techniques could augment its predictions going forward.

Years ago, Dr. Delle Monache got into this field because he loved the idea of using math to peer into the future. The math keeps getting more sophisticated, but the goal remains the same.

“The magic of telling you what is going to happen tomorrow — that always fascinated me,” he said.