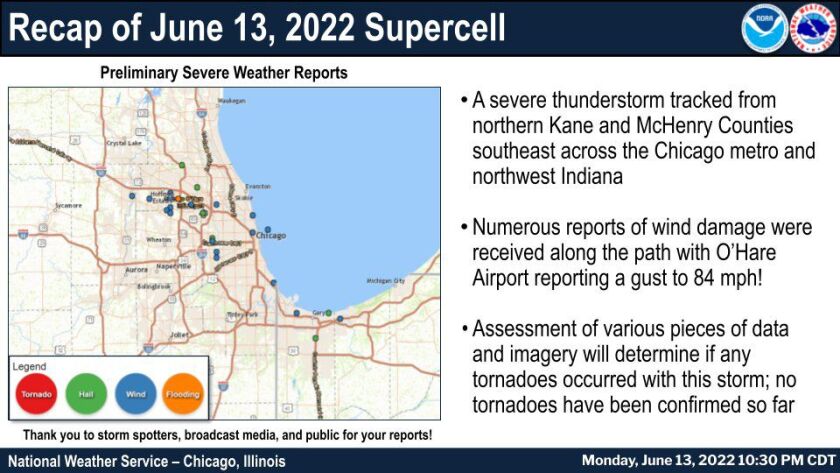 Tornado warnings sounded as storms ripped across the Chicago area Monday evening, with 90 mph windsknocking over parked airplanes, tearing off the roof of at least one building and leaving thousands without power.

Although there were no reported tornadoes, there was a trail of wind damage along the path of the supercell thunderstorm — from Kane County across Chicago to northwest Indiana.

More than 53,000 ComEd customers lost power, with suburban Maywood taking the brunt with 44,000 outages, according to ComEd. More than 43,000 remained without power Tuesday morning.

Despite the rotational nature of the storm cell, there was no confirmed tornado, National Weather Service meteorologist Ricky Castro said.

“It’s possible there was a tornado in the northern suburbs, but it’s not something we can conclusively say until we can get a crew to survey the area” on Tuesday, Castro said.

The Weather Service is also investigating possible tornado damage in Westchester, Maywood and Bellwood, a western suburb where the roof of a three-story apartment building was reportedly ripped off partially, displacing 30 families but injuring no one.

Winds gusted to 84 mph at O’Hare Airport and 69 mph at Midway Airport, Castro said. A ground stop was ordered at O’Hare by the Federal Aviation Administration.

There were also reports of hail 1 inch in diameter.

Thousands were jolted by Weather Service warnings sent to cellphones that read: “Take shelter now in a basement or an interior room on the lowest floor of a sturdy building. If you are outdoors, in a mobile home, or in a vehicle, move to the closest substantial shelter and protect yourself from flying debris.”

The storm moved through the northern suburbs at 30 mph before turning southeast and increasing in speed before making its way through the city at 7 p.m., Castro said. “Warnings went out well in advance,” he said.

Videos posted to Twitter showed severe damage to a parking garage wall at the Toyota dealer in Lincoln Park. Part of a wall collapsed at the Toyota of Lincoln Park dealership at 1561 N. Freemont St., but no one was injured, a Chicago Fire Department spokesman said.

The city also received numerous reports of felled trees, making some roads impassable and covering cars with branches. Accompanying damages was reported but no reports of injuries caused by the storm, the Fire Department spokesman said.

Brookfield Zoo sustained “significant” damage from the storm and was delaying its opening Tuesday until the afternoon. “Animals and staff are safe,” the zoo wrote on Twitter.

The weather also delayed the start time for a Cubs game against the San Diego Padres at Wrigley Field as fans sought shelter in the Friendly Confines.

The storms ushered in rising temperatures that are expected to reach the high 90s Tuesday and Wednesday. The city has opened its cooling centers as forecasters predict that humidity will make it feel more like 110 degrees.