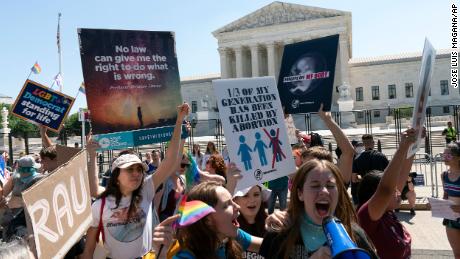 For abortion opponents, who see ending a pregnancy as tantamount to the murder of a fetus, these are unavoidable consequences of a moral wrong being corrected. But Americans who favor abortion rights and live in states where they are now illegal feel themselves victims of unacceptable government intrusion into their decisions about their health and families.

Regardless of their philosophical positions on ending a pregnancy, leaders on both sides of the political aisle are grappling with governing challenges caused by the sudden end to legal abortion in some states. Republicans who long promised to outlaw the procedure are facing demands to provide more social services for people whom they force to give birth — and their babies. Democrats are considering how to bolster abortion rights in blue states against a possible push by future Republican majorities in Washington for a national ban.

Tensions are already flaring between anti- and pro-abortion rights states. Big business is grappling with how to help workers get reproductive services and avoid political fallout in red states. The abortion rights movement is beginning to fight back and the White House is balancing demands from progressives for President Joe Biden to move aggressively to safeguard abortion rights with the limits of his executive power. And the implications for the midterm elections and the transformed 2024 presidential race are growing.

Perhaps the United States eventually achieves some uneasy equilibrium on abortion. But so far, local, state and national leaders have been knocked sideways by the court’s decision. Years of patchwork abortion practices and confusion lie ahead.

Justice Samuel Alito argued last week that he and his conservative colleagues could “not pretend to know” how the political system would respond to their judicial earthquake but said authority to regulate abortion must be up to the people.

But the rest of the country has to live with what he wrought in his majority opinion and the consequences of the sudden withdrawal of an established constitutional right — regardless of individual views on abortion.

Four days later, the words of Chief Justice John Roberts, in a concurrence to the court’s move last week, are ringing true. Despite his own opposition to abortion, Roberts argued that a less abrupt move by the court that did not overturn Roe v. Wade would be “markedly less unsettling.”
Yet the mayhem set off on Friday is in keeping with the temperamental underpinnings of Donald Trumpism and the smash-it-up and see where the pieces fall ethos of the bulldozing former President who built the new right-wing court majority and whose legacy will be partly defined by the coming struggle over abortion.

And the chaos unleashed may be a preview of years to come with the court apparently determined to set about squelching precedent on social issues, financial regulation, gun laws, religion in the public square and the government’s power to regulate the environment.

“The irony is that one of the bases for Alito’s decision was that … it was time to end the controversy. He has done exactly the opposite,” Nancy Gertner, a retired district judge nominated by former President Bill Clinton, said on CNN’s “The Situation Room with Wolf Blitzer.”

Practical consequences of the court’s decisions are rolling out after conservatives celebrated a stunning victory, a half century in the making, against the 1973 Roe v. Wade decision enshrining the constitutional right to end a pregnancy. Liberals, meanwhile, erupted in grief and fury as protests spread from outside the Supreme Court building in Washington, DC, around the country over the weekend.

On Monday, the fight entered courtrooms. In Louisiana, a judge blocked the state’s “trigger law” on abortions, which took effect just after the Supreme Court ruling. The suit, filed on behalf of Hope Medical Group for Women and Medical Students for Choice, argued that the bans were unconstitutionally vague. This was one of the first of countless legal challenges across the country springing out of the Supreme Court’s move.

A Utah judge granted a temporary restraining order to block the state’s “trigger ban” after the state’s Planned Parenthood chapter filed suit over the weekend. Performing an abortion in the Beehive State under the ban would be a second degree felony in most cases, according to the lawsuit. There are some exceptions, including for a mother’s health or following rape or incest.

In some other states, however, the laws are even stricter and likely to draw more challenges. In South Carolina, meanwhile, a federal judge lifted a hold placed on the state’s abortion ban beginning at six weeks — allowing the state to enforce its “heartbeat law.”

Ten states now ban or severely restrict the procedure, according to the Guttmacher Institute, a research organization that supports abortion rights. More are likely to shortly follow suit, including Mississippi, Tennessee and Idaho.

But underscoring the national schism, many states are pushing ahead fast to strengthen abortion rights, including California, Minnesota and Washington state, which have Democratic governors. Some more liberal regions have pledged to act as havens for women from anti-abortion bastions, a move that could open a legal morass and trigger feuds between states over a foundational political belief that harkens back to the pre-Civil War era.

Illinois Gov. J.B. Pritzker, a Democrat, defended his state’s status as a destination for women who have had their abortion rights taken away. “This is a fundamental right. Everybody should have it,” Pritzker told CNN’s Erin Burnett.

There are also thorny legal questions that officials haven’t started to resolve. For instance, how will anti-abortion states enforce their laws? Will they crack down on women ordering abortion pills from out of state? And how will they deal with corporations that finance travel for employees for out-of-state care? And will some of those firms, under employee pressure, feel the need to move to states where abortion rights are protected ?

Some Americans pay a heavy price

As if often the case after massive political showdowns that expose the country’s divides, Americans are left to try to live their lives in the fallout. Friday’s decision is causing huge personal uncertainty. Pregnant people in anti-abortion states now find themselves facing life crises they might not have faced last week. Complex questions are arising over whether some state restrictions on abortion could affect the availability of fertility treatments or could limit the options of physicians when treating women after miscarriages.

There have been pledges by conservative leaders, like South Dakota Gov. Kristi Noem, for example, for financial and emotional support for mothers. Yet so far, there are few details in the GOP-led states that are less likely to spend on health care and social programs.

This is piling pressure on the White House to offer federal protections for abortion. In an exclusive interview with CNN’s Dana Bash, however, Vice President Kamala Harris on Monday said the administration was not looking at one idea — using federal lands for abortion services in or around anti-abortion states. Such a scheme — and another proposal for the federal government to fund out-of-state trips for women to get abortions — may fall foul of the law.

House Speaker Nancy Pelosi on Monday outlined legislative ideas for Democratic colleagues that would make clear Americans have the constitutional right to travel freely. The speaker also plans to pass legislation enshrining Roe v. Wade into law. But such a measure has no chance of overcoming a Republican filibuster in the Senate.

As the governing challenges of the Supreme Court’s bombshell reverberate, some politicians sense an opening. While some Republicans have trodden carefully, former Vice President Mike Pence, a potential 2024 presidential candidate, threw himself fully behind a nationwide abortion ban.

Seeking to expand his evangelical power base, Pence told Breitbart News last week that he would not rest until “the sanctity of life is restored to the center of American law in every state in the land.”

Pence no doubt welcomed the chance to make news on an issue that has nothing to do with the House select committee investigating the US Capitol insurrection, which has been focusing on his refusal to help Trump steal the 2020 election — a move that alienated Pence from grassroots Republicans.

His successor as vice president also had an eye on the future political implications of the decision as she laid out a human message Democrats could use in upcoming elections.

Harris told CNN that “as a former prosecutor who specialized in crimes of violence against women and girls, in particular child sexual assault and rape, the idea that after a woman has endured such violence to her body, that she would not have the freedom and authority to decide whether she wanted to continue with a pregnancy that is a result of an act of violence is absolutely unthinkable.”

But as far as Alito’s opinion is concerned, however, these are not questions for the court.