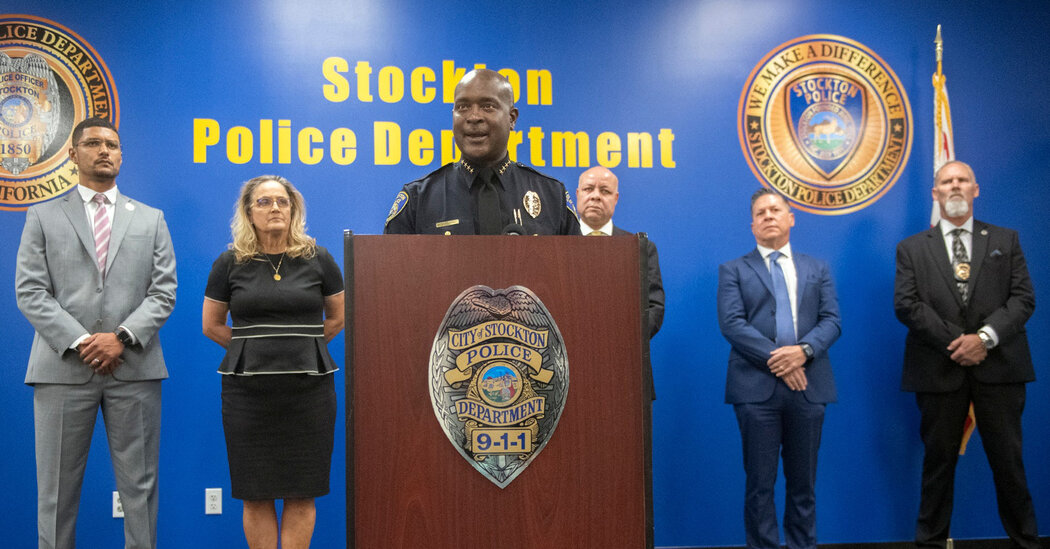 A man the police described as a “potential serial killer” who terrorized residents in California’s Central Valley in a string of fatal shootings was arrested early on Saturday while he was “out hunting” for more victims, the authorities said.

The man, Wesley Brownlee, 43, was arrested in Stockton after an investigation that connected five fatal shootings across Stockton along with a killing about 70 miles away.

At a news conference on Saturday, the police did not release any information about a motive. They said Mr. Brownlee has a criminal history but did not provide details.

The arrest was the product of good police work and an engaged public, said Stanley McFadden, the chief of the Stockton Police Department.

Members of the public submitted a large number of tips about the shootings, which had rattled the city and nearby communities. Based on those tips, the police zeroed in on a suspect, Chief McFadden said. A reward for information leading to an arrest had grown to $125,000.

The police said that Mr. Brownlee was taken into custody around 2 a.m. local time without a struggle. When officers arrested him, he was wearing dark clothing, had a mask around his neck and was carrying a firearm, Chief McFadden said.

“Our surveillance team followed this person while he was driving,” he said. “We watched his patterns and determined early this morning he was on a mission to kill. He was out hunting.”

He added later, “We are sure we stopped another killing.”

Tori Verber Salazar, the district attorney for San Joaquin County, said that her office was reviewing evidence to determine charges, which will be announced on Tuesday. She said the capture of Mr. Brownlee was the product of a community effort.

“You don’t come to our house and bring this kind of reign of terror” without mobilizing Stockton and the county, she said.

The arrest came nearly two weeks after the police said that five victims, all men between the ages of 21 and 54, had been fatally shot while alone in dimly lit areas at night or in the early morning between July 8 and Sept. 27. Four of the men were Hispanic; one was white. None were robbed.

The police later said that they had also linked those cases to two additional shootings: a 40-year-old Hispanic man who was killed in Oakland, Calif., about 70 miles west of Stockton, on April 10; and a 46-year-old Black woman who was shot in Stockton on April 16 and survived.

Chief McFadden said on Oct. 4 that the authorities believed they were dealing with a “potential serial killer” after investigators connected the killings through ballistic and video footage, including a clip that showed a person with an uneven stride and an upright posture.

Investigators interviewed the woman who survived and learned that she had been in her tent when she heard someone walking around her campsite. When she stepped outside, she saw someone wearing dark clothes and a mask pointing a gun at her, Chief McFadden said.

She rushed toward the gunman and was shot multiple times before the man lowered his gun, Chief McFadden said.

The killings had spread anxiety among some residents, with many questioning who could be behind such coldblooded acts in Stockton, which is in the agricultural flatlands of California’s Central Valley. The city, which has long struggled with poverty and violence, is 80 miles east of the San Francisco Bay Area and home to about 322,000 people.