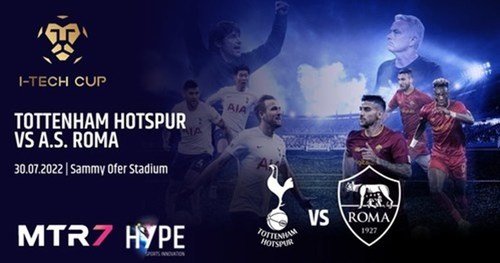 The I-Tech Cup, which takes place on 30th July at Sammy Ofer Stadium in Haifa, Israel, combines high quality sport with the best of ground-breaking technology, driving innovation in this space.

Fans from across the globe can take part in Tally’s prediction game based on the clash between the two European heavyweights. Available in any chosen language, it offers players a captivating prediction game containing a series of questions about potential outcomes from the game, with additional questions added at half-time. A leader board will be created, allowing fans to test their football knowledge against others. The game can be enjoyed by fans alongside the match action at

Prior to kick-off in Israel, one of the major tech start-up hubs in the world, Tally will take part in an Innovation Expo, hosted by SportsTech, featuring a number of leading global solutions and promoting innovation that is set to mould the future of the sports industry.

Brad Vettese, CEO of Tally, said: “Roma and Tottenham are teams with huge, loyal and global fanbases and this event offers a perfect opportunity for us to showcase the capabilities and utility of our fan engagement platform.

“This contest is being used to showcase the most advanced fan technology in the world. It’s an honor that Tally has been selected to create a game that tests the knowledge of football supporters, wherever they happen to be, strengthening our position as a leader in global sports engagement.”

Tally Technology was founded in 2018 as a free-to-play prediction game for brands, professional sports teams, leagues and media platforms seeking a turnkey fan engagement platform. As part of the natural game play, Tally is building a database of unique users and gathering data on those users’ gaming, wagering, brand preferences, consumer spending and other insights.

Over the past four years, Tally has recorded more than 20 million predictions from unique users across North, Central and South America. It is the fan engagement platform choice of some of the biggest names in sports, including the Los Angeles Rams, Green Bay Packers, Buffalo Bills, Los Angeles Lakers, Atlanta Hawks, St Louis Blues, Edmonton Oilers, Los Angeles Kings, Ceara and Atlético MG.

Tally, co-founded in 2018 by Super Bowl champion quarterback Russell Wilson, is a fan engagement and consumer data platform company that collects and segments consumer data for its team, federation, broadcast and brand partners using white-label mobile platforms. Its partners utilize this data to increase sponsorship and direct revenue through providing customized goods and services to their fanbase without the cost of social media marketing.