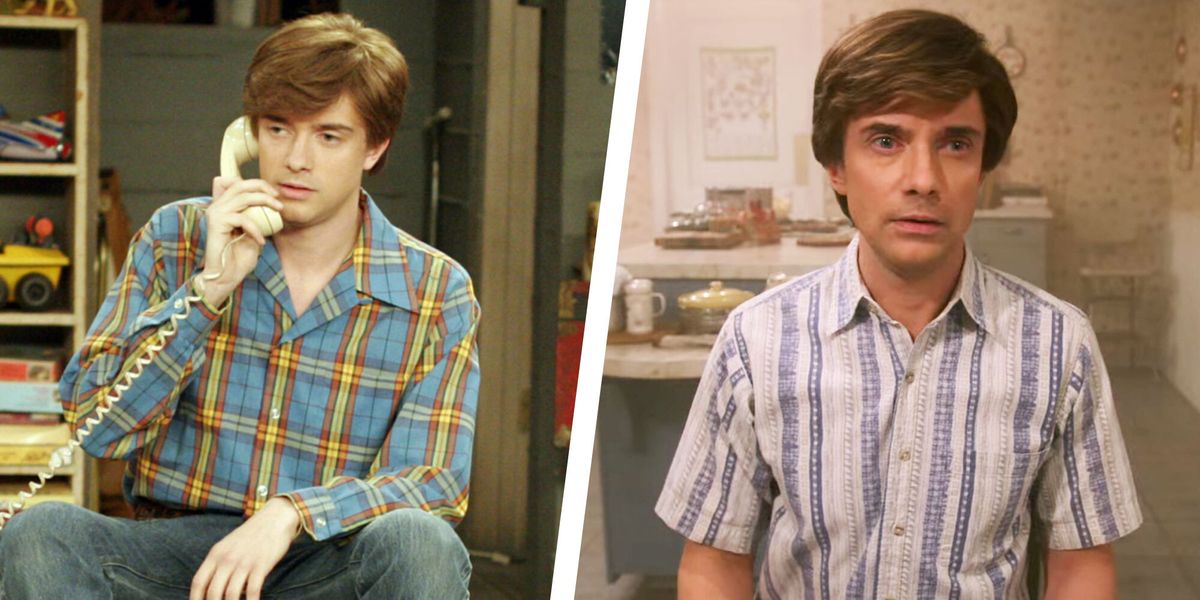 Hello Wisconsin! After nearly 16 real and TV years since That ’70s Show said their goodbyes to us, we’re welcomed back to Point Place, Wisconsin with Netflix’s That ’90s Show. The pot-smoking coming-of-age sitcom’s spiritual sequel invites us to watch another hilariously misguided group of teenagers figure out life and annoy Red Forman (Kurtwood Smith) into more popped blood vessels. But, the figurative, and in some cases literal, parent show still frames the world the new generation steals kegs and go to raves in.

Set throughout the summer of 1995, That ’90s Show starts with Donna (Laura Prepon) and Eric Forman’s (Topher Grace) socially awkward offspring, Leia Forman (Callie Haverda), visiting her grandparents Red and Kitty (Debra Jo Rupp), without any friends, lips that have never been kissed, and little to no cannabis experience. But she’ll end her summer with a best friend who once convinced her to bring pacifiers to a rave, stoner circle sessions that’ll make the younger version of her parents proud, and a love triangle with two best friends juicy enough to propel us to a Season 2. The show appears to make a conscious effort to avoid the two shows crossing over, sometimes to the detriment of the growth of characters we’ve longed to see again in this world. The five inseparable friends for eight seasons only appear on screen together in pairs and primarily never reference the others. We’re not told if they kept in touch over the 16 years, but Michael visited Eric’s parents’ home and talked with Eric and Donna’s child without even a customary inquiry on how her parents are after they conveniently left moments before, it feels jarring.

Most people watching this show likely came to see how this show updates the one they watched for years, so there’s no escaping the pot cloud of That ’70s Show, you might as well lean in and inhale. Outside of Kitty and Red, That 70s Show characters reappear sporadically. But, they appear long enough for us to see how they’ve been doing and how far they’ve come over the last 16 years.

Topher Grace had no on-camera acting experience before he donned the mop top wig as neurotic good guy Eric Forman in That 70s Show. Nevertheless, he dropped out of college at 20 to join the cast in 1998. By the final season, Grace had already left the show for most of the season, opting instead to find out who he was as an actor outside of Point Place, Wisconsin.

Since the end of That ’70s Show, he’s run the gamut with the roles he’s chosen. First, he’s played a schizophrenic supervillain (Spider-Man 3) and a cartoonishly evil KKK leader David Duke (BlacKkKlansman). Now, the 44-year-old actor stars in ABC’s family sitcom Home Economics as a middle-aged father struggling as an author and trying to keep his family together.

By the time Kurtwood Smith became Red Forman, the grumpiest TV dad, on That ’70s Show in 1998, he’d already appeared on 36 TV shows in 18 years. He’d already been a homicidal crime boss as Clarence Boddicker in Robocop and government official Robert Griggs. Years of playing unscrupulous authoritarian prepared him to have Eric and his crew under this thumb.

Since the end of That ’70s Show, Smith hasn’t been on any show for as many episodes as he was on That ’70s Show, but he’s been all over your TV screen for the last 16 years. He’s been the disapproving Senator Blaine Mayer on 24 and Theranos’ intimidating lawyer David Boies in Hulu’s The Dropout. Now, he’s back in his fake midwestern stomping grounds with That ’90s Show, still berating teenagers and still being one argument away from blowing a blood vessel.

Laura Prepon’s teenage life before That ’70s Show sounds like something straight out of a movie. Before acting was a thought in her mind, she moved to Milan at the age of 15 to model and cited her work in an Italian commercial at the time as what gave her the acting bug. Then, after only a year of acting in New York City, she landed her breakout role as no-nonsense feminist queen Donna Pincioti.

Since That ’70s Show, she’s kept busy by starring in her comedy Are You There, Chelsea in 2012 and etching her name further into the history books as a badass with a heart named Alex Vause in Netflix’s groundbreaking seriesOrange Is The New Black. Her return to the That ’70s Show universe that birthed her acting career in That ’90s Show was her first acting credit since leaving Orange Is The New Black in 2019.

People were already used to Mila Kunis’s face before she became Jackie Burkhart on That 70s Show. Before landing her breakout role at 15, Kunis appeared on generationally important TV shows Days of Our Lives, 7th Heaven, and Baywatch. However, Kunis’s acting chops were so refined by the time she auditioned for That ’70s Show the casting directors picked her for the role even though they stipulated everyone auditioning had to be at least 18.

Next to Prepon, Kunis arguably has the most accomplished filmography after the 2006 finale of That ’70s Show. She received a Golden Globe nomination for her supporting role as Lily in 2011’s Black Swan along with a Critics’ Choice Movie Awards nomination for Best Actress in a Comedy for her role as Lori Collins in Ted and has voiced one of the signature Family Guy characters, Meg, since 1999. Now, she’s the (somewhat) happy wife of high school sweetheart Michael Kelso, who she was in the middle of remarrying for the second time in the first season of That ’90s Show.

Similar to Prepon, Kutcher’s career began with modeling, scoring commercials for Calvin Klein, and modeling overseas. His role as loveable doofus Michael Kelso in That ’70s Show was his first acting job, and he hasn’t looked back since.

Kutcher’s post-That ’70s Show career is a mixed bag of sitcoms, mind-bending movies, activism, and venture capitalism. He donned the iconic black turtleneck to play Steve Jobs in the Apple co-founder’s Jobs biopic; he played a billionaire tech entrepreneur for four seasons of Two and a Half Menand invested in a few companies you may have heard about, like Skype, Foursquare, and Airbnb. He reunited with That ’70s Show castmates Danny Masterson, Wilmer Valderrama, and Debra Jo Rupp for the short-lived sitcom The Ranch, his last TV acting role as someone other than himself before returning as Michael Kelso in That ’90s Show as a father and remarried husband to Jackie.

Debra Jo Rupp didn’t land her seminal role as Kitty Forman on That ’70s Show until 47-years-old and 18 years into her acting career, but she earned it. After that, she had to circumvent her family’s wishes, cut her acting teeth in off-Broadway plays, and have sporadic appearances on shows like Family Matters, Seinfeld, and Friends before landing her most consistent TV role on That 70s Show.

Since the show went off the air in 2006, Rupp reunited with her the boys she fictionally raised on That ’70s Show —Ashton Kutcher, Wilmer Valderrama, and Danny Masterson— on The Ranch. She also lent her TV mom charm as Vicky Putney on ABC’s Better With You. Of course, she was also Sharon Davis/Mrs. Hart a brainwashed neighbor to Wanda Maximoff in Disney’s Wandavision. Now, she’s back in Point Place, Wisconsin, as Kitty in That ’90s Show, ready to offer wisdom, her basement, and any baked goods a new crop of teenagers desire.

If there were a stoner Mt. Rushmore, Tommy Chong would be front and center looking through the slits of his eyelids with the fattest joint in his mouth. Before That ’70s Show, Chong had logged in 20 years as the go-to guy for pothead characters, including the iconic string of ’80s cannabis crusade movies with his partner in pot, Cheech Marin. Playing disheveled aging hippie and photo store owner Leo, he was already that character longer than most of his co-stars were alive.

Since the end of That ’70s Show, he’s voiced the character of himself on The Simpsons, and appeared as himself in Fergie’s “L.A. Love (La La) and Trailer Park Boys: Out of the Park. The two-episode reprisal of his Leo role in That ’90s Show is his first semi-regular appearance in a TV show since That ’70s Show ended in 2006.

Wilmer Valderrama was already on primetime TV in CBS’s drama series Four Corners before becoming Fez on That ’70s Show. By the time he was the foreign exchange student of mysterious origins in the teen comedy, Valderrama was a classically trained actor with experience acting in plays.

A month before That ’70s Show‘s series finale aired in May 2006, Valderrama had already revealed his TV life after the show: hosting an MTV competition show about who can disrespect the other’s mother the funniest, Yo Momma. While he never reached the 200-episode count he did with That ’70s Show again in his career, he’s getting close as special agent Nick Torres on NCIS for the last seven years. On That ’90s Show, he returns to Kitty and Red’s lives as a successful hair salon owner with a 90s-appropriate hairstyle. While him and Jackie were together at the end of That ’70s Show, their union didn’t last over the 16 years between the two shows, and now Fez is back to his usual dating complications in That ’90s Show.

Rash didn’t make his way to Point Place, Wisconsin as flamboyant and problematic Fenton until the fifth season of That ’70s Show in 2002. Before he was the landlord from hell to Fez, Rash started acting as part of the L.A.-based improv comedy group The Groundlings in 1994 at 23. His first recurring role was as an obsessively detailed fact checker Harris Von Doren on the late ’90s workplace comedy The Naked Truth, as well as one-off appearances on shows like Clueless, The Hughleys, and CSI: Crime Scene Investigation.

After a relatively short but memorable stint on That ’70s Show, Rash experienced the most success as the temperamental school principal Dean Pelton on NBC’s cult classic comedy Community. At 41, Rash received his first and only Critics Choice Award nomination for Best Supporting Actor In A Comedy Series for the role. In That ’90s Show, he’s expanded his real estate portfolio to include the home of Sherri Runck (Andrea Anders), Fez’s girlfriend, whom he still harbors resentment for until the hair salon mogul gives him a head of hair that’ll heal any old wounds.

Don Stark’s acting career before becoming Donna’s bumbling father Bob Pinciotti in That ’70s Show is a hodgepodge of roles. He voiced Rhino in Spider-Man: The Animated Series, played a policeman on Baywatchand was an alien trader in Star Trek: Deep Space Nine.

Since raising Donna and leaving That ’70s Show at the end of its run, Stark hasn’t been on a show nearly as long, but he has played Oscar Kincade, a vindictive ex-convict basketball team owner, for four seasons. He also played Jules Podell in the Oscar-winning film The Green Book. But, he has been mainly out of the public eye until his brief return to That ’90s Show, now as a doting maternal grandfather of Leia trying to compete for her love against perpetual antagonist Red Forman.

Keith Nelson
Keith Nelson is a writer by fate and journalist by passion, who has connected dots to form the bigger picture for Men’s Health, Vibe Magazine, LEVEL MAG, REVOLT TV, Complex, Grammys.com, Red Bull, Okayplayer, and Mic, to name a few.