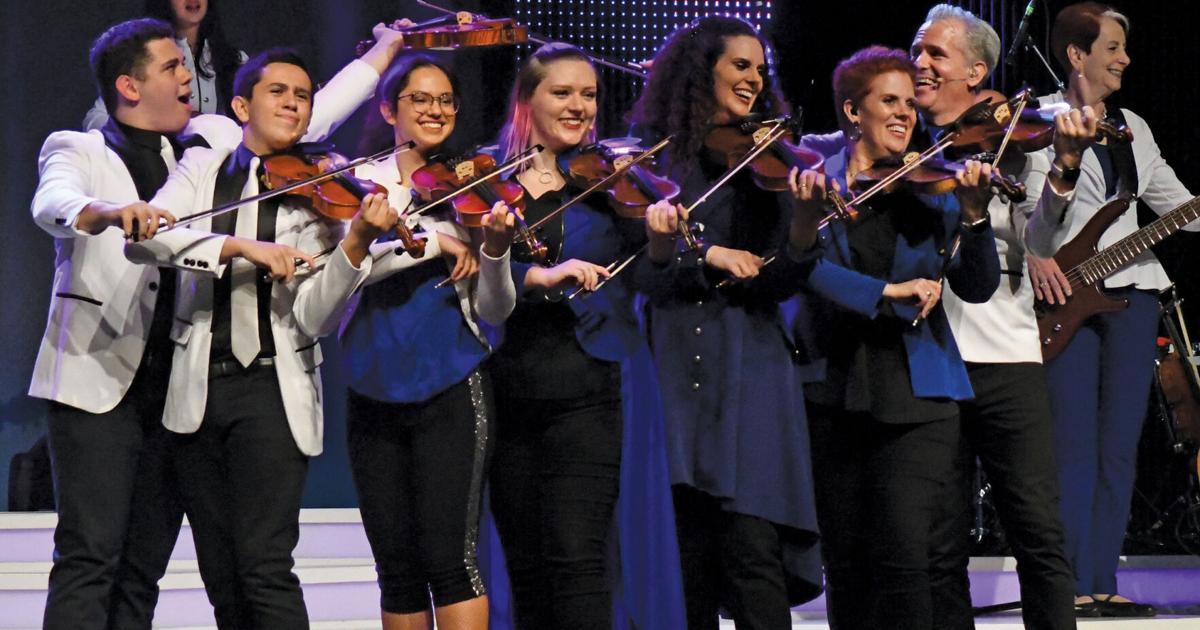 The Duttons have returned to the Branson stage following a short hiatus as they transitioned into their new temporary home at the Yakov Smirnoff Theatre.

At the end of September, The Duttons relaunched their 2022 season show in Branson for the first time since a fire devastated The Dutton Family Theatre on July 13.

“Yakov was so nice. He reached out to us and said, ‘I’ve got this great big theatre. You guys would fit perfectly. Our schedules would line up.’ We explored it and it was a perfect fit,” The Duttons CEO and Performer Timothy Dutton said. “In the midst of all the fire recovery, it quickly became apparent it was going to take longer than we wanted. We wanted it to be over in a couple of months. It we’ll be ready to reopen at The Dutton Theatre next year in April. April 2023. In the meantime we’ll be here at Uncle Yakov’s.”

For their grand reopening, The Duttons hosted a special reunion week of performances where all seven Dutton siblings reunited on stage.

“For several years we’ve made it our model to bring out the retired performers of our family, my siblings, a few of them who have retired and have them visit a week at a time. Then we had the brilliant idea of bringing all of them out at once,” Timothy said. “Schedules lined up, the stars aligned and all seven of us came to do the reunion week of shows and it was a lot of fun. We had fun both on stage and off stage enjoying each others company, going out to dinner, playing games.”

Sales and Box Office Manager and Performer Judith Dutton added the reunion shows were just what the family needed following this summer’s fire.

“We really needed the lift. After the fire, that’s just been a hard few months let me tell you,” Judith said. “I would much rather do a show than clean smoke filled equipment. It was great just having the lift and support of the entire family coming out.”

For folks who have not had the opportunity to enjoy a performance of The Duttons this season, Timothy shared what audiences can expect.

“The Duttons show is hard to explain and hard to describe. It is very exciting and entertaining. Fun for the whole family. Lots of different styles of music,” Timothy said. “Some new stuff, some old stuff, some ‘Duttonized’ stuff and you’ll see what that means when you come to the show. We give a little flair to everything we do. Comedy, dancing and a variety show all around.

Some recently added elements to the 2022 show include some new special effects and a couple of new songs featuring all three generations of Dutton performers.

“We’ve got all ages in the cast and if you don’t change it up, then the kids get bored,” Judith said. “You’ve got to keep the kids engaged, which means there’s got to be something new going on all the time.”

Jessica Dutton, eldest of the Dutton grandchildren, performer and Fudge Master, confirmed her mother’s assessment of the grandchildren.

“Once you fully settle into muscle memory on stage, it’s time to change,” Jessica said with a laugh.

Alongside Timothy, Judith and Jessica, the current cast of The Duttons features the talents of Dean, Sheila, Amy, Julian, Damian, Josiah, Abigail, Grace, Seth, Orson, Marcus, Nerida, Selena and Leila. Joining them are Rob Wilson on the drums, Steve Leach on the bass guitar, and two student interns: Kashton Hanson and Sayler Connover.

As they prepared to restart their 2022 season at “Uncle Yakov’s,” Timothy shared it was overwhelming to think about bringing their full production to a new stage.

“We came in here and we thought, ‘How are we going to make this work?’ Just one thing at a time we brought our whole stage set over. All the white (riser) pieces came from our theatre, so it was very familiar to us,” Timothy said. “We brought over a lot of our lighting, we brought over a lot of our equipment and it just ended up fitting perfectly, so we totally made it our home on stage. Very natural to perform here. In fact the very first night it felt like we’d be here months and months. The audience responded super energetically and it was our new home right away.”

When not in Branson, The Duttons can often be found performing around the country. Judith shared being a touring family was deemed an advantage when they headed to Yakov’s.

“We tour a lot, so we will often walk out on a stage that we’ve never been on before and with unfamiliar situations,” Judith said. “I actually had several come up and say after the show, ‘You fit even better on Yakov’s stage. It’s like you guys needed a bigger venue to accommodate all of you.”

Earlier this month, The Duttons Award-Winning Violinist Amy Dutton Arambulo announced she has been diagnosed with stage 2 breast cancer. Timothy said his sister learned of her cancer on Tuesday, Sept. 6, so the diagnosis is still pretty recent.

“She’s just into establishing her treatment plan and starting in on it. Just a couple days ago was her first chemotherapy treatment. She did quite well immediately after and now she’s really feeling the effects of the chemo treatments,” Timothy said. “She has no plans to stop performing. She’s just going to take it everyday as it comes and see how it goes.”

Judith added if Amy is not feeling up to doing the show or a certain segment of the production, they have contingency plans in place to allow her the time she needs to rest. However, Amy has stated she has every intention of being a part of every show.

“It’s good for her to have that demanding feeling of I’m going to beat this and I’ve got to get up and fight it,” Judith said. “Getting up and performing every night is the best way for her to fight it. Feel the music. Give the music. Let the music touch her heart and heal.”

Amy’s youngest son Josiah is a survivor of Leukemia. He had his final chemo treatment in November of 2016 and has remained in remission ever since. In the show, Amy shares Josiah’s story with the audience before sharing her own diagnosis with the crowd.

“The funny thing is that going through that whole experience with Josiah, I am less fearful, and very grateful. I have a very good idea of what to expect,” Amy said in a statement. “I know what questions to ask my doctors, and I am familiar with the whole process. Just having all that knowledge is already a blessing in my life, and having such strong and loving support from my family is another.”

Folks who have not had the chance to see a Duttons performance in action in recent years, will be surprised to see more of the Dutton grandchildren stepping up for larger roles in the production now. As the oldest grandchild on stage, Jessica explained what it’s like being a part of the third generation of performers.

“I went away to school for a couple of years. I actually went and did an internship at Disney World for a fall. Every time that I left, I missed performing. Really the family has just been so great, they really want us to go out there and live lives and get experiences. Since I’m the oldest, I’m the only one who has gotten to the point of leaving and coming back to perform full time,” Jessica said. “We have a couple in school right now and we have several on church missions and it’s probably going to be a bit of time before everyone finds out what they want to do with their lives, but I really think that this is a great place to be and a great thing to do.”

With only a couple of weeks left until the end of the fall show season in town, Jessica confirmed Christmas show rehearsals are already underway.

We do have some exciting Christmas things in store,” Jessica said. “We are planning on doing the shows as we normally do, so only half the show is Christmas and then we keep a bunch of stuff from our show throughout the regular season. We’re not planning on making too many changes.”

Due to the fire, many of the Christmas show props were lost, but “Uncle Yakov” is once again providing his assistance to The Duttons.

“Yakov did offer us his Christmas props and decorations. Because he’s not doing a Christmas show, so we’re going to take advantage of that,” Judith said. “It might be a Russian Christmas this year.”

Showtimes for The Duttons are at 2 and 8 p.m. on select dates through Wednesday, Dec. 14. Yakov’s Theater is located at 470 State Highway 248 in Branson.

For additional information on the show or to reserve tickets call the box office at 417-332-2772 or visit theduttons.com.