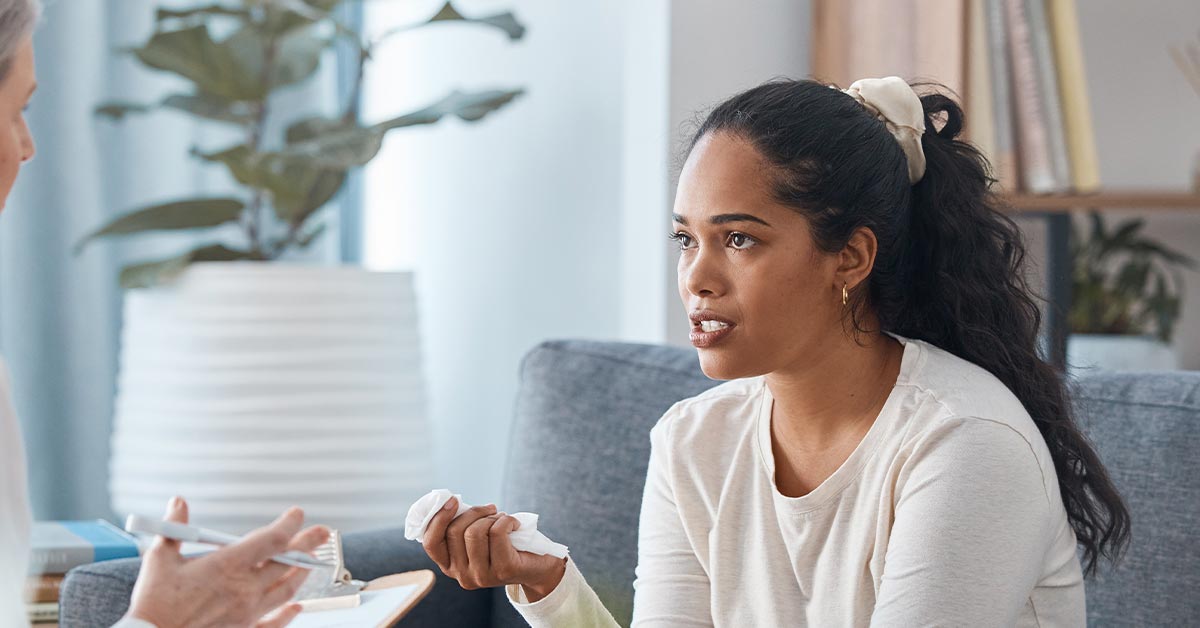 Nearly one-fifth of U.S. workers (19%) rate their mental health as fair or poor, and these workers report about four times more unplanned absences due to poor mental health than do their counterparts who report good, very good or excellent mental health. Projected over a 12-month period, workers with fair or poor mental health are estimated to have nearly 12 days of unplanned absences annually compared with 2.5 days for all other workers. Generalized across the U.S. workforce, this missed work is estimated to cost the economy $47.6 billion annually in lost productivity. 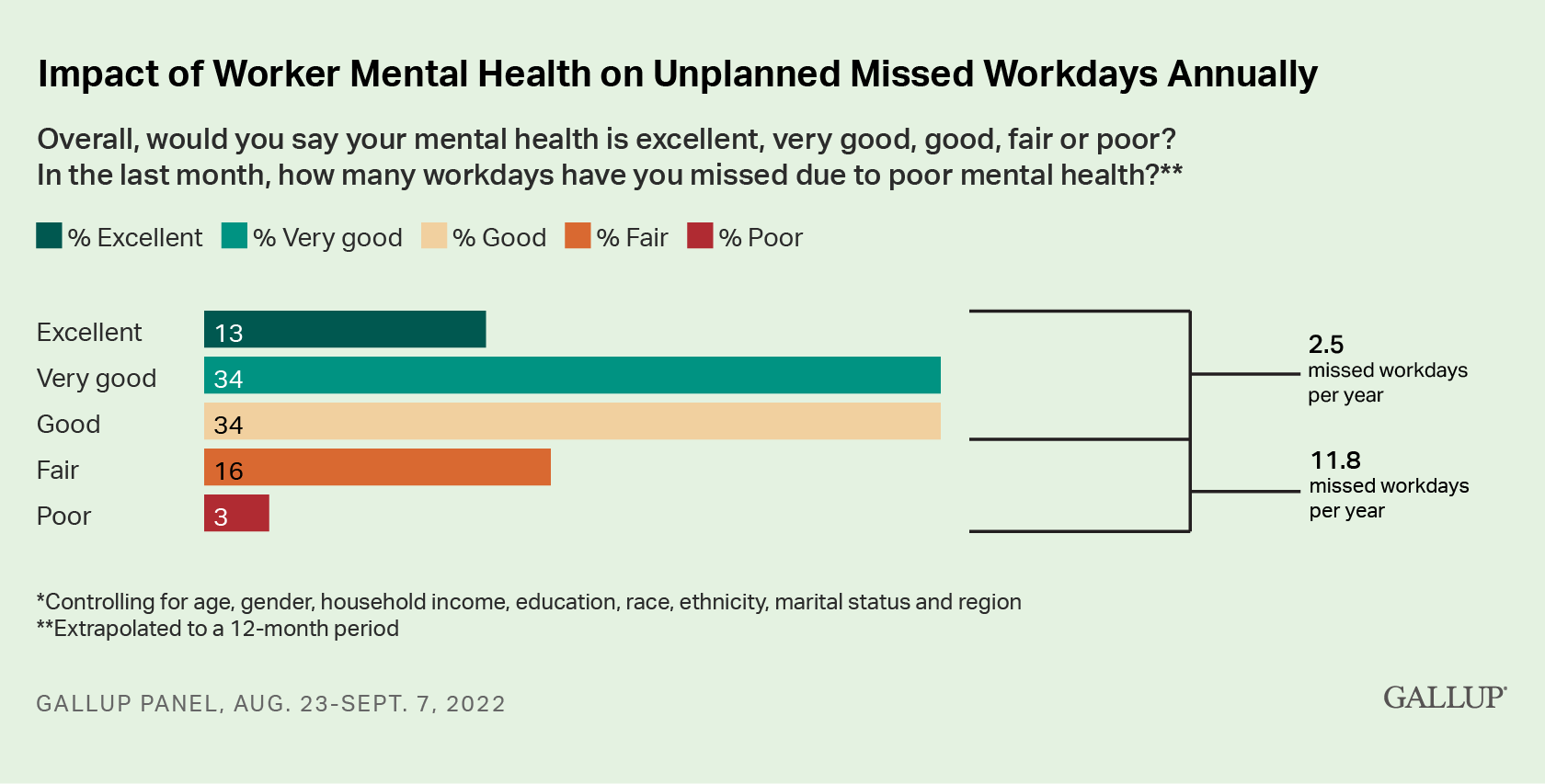 The most recent results, obtained Aug. 23-Sept. 7, 2022, are based on 15,809 U.S. working adults surveyed by web as a part of the Gallup Panel, a probability-based, non-opt-in panel of about 115,000 adults across all 50 states and the District of Columbia. Missed days estimates are based on the question, “In the last month, how many workdays have you missed due to poor mental health?” Results are computed after controlling for age, race, Hispanic ethnicity, gender, household income, education, marital status and region of the country. The cost of a missed workday is conservatively estimated to be $340 per day for full-time workers and $170 per day for part-time workers.

Struggles with mental health are not evenly distributed across the working population. As with other mental health indicators — including depression — women (23%) are more likely to report poor or fair mental health than are men (15%). Nearly one-third of young workers under the age of 30 (31%) do the same compared with 11% of those aged 50-64 and 9% of those aged 65 and over.

As such, working women under the age of 30 carry the greatest burden of fair or poor mental health (36%) across all age-by-gender subgroups. Notably, among those aged 65 and older, the mental health gender gap found among younger age groups disappears.

Nearly half of young workers aged 18-29 (47%) report that their job has negatively affected their mental health. This negative impact mitigates modestly with increasing age before dropping substantially for workers aged 65 and older — this group reports that their job has had a positive impact at nearly a three-to-one ratio (43% positive vs. 15% negative). The improvement with age could be attributed to many employees advancing into more rewarding work as their careers progress or — especially in the 65 and older group — working out of choice rather than necessity.

Less Than Half of U.S. Workers Aware of Employer’s Mental Health Services

Amid a plurality of workers who report that their workplace has a negative impact on their mental health, a majority (57%) are unable to confirm the existence of easily accessible mental health support services in their workplace — 24% report the absence of these services, and another 33% are unaware if they are even available through their employer.

Fifty percent or more of employees in 11 of the 16 reportable industries either report the absence of easily accessible mental health support services in their workplace or are unaware if they exist, including 75% of employees in construction and 71% in arts/design/entertainment/sports/media.

Thirteen percent of government or public policy workers report that in the prior six months, their job had an “extremely negative” impact on their mental health, greater than in any other industry.

The economics of wellbeing has been demonstrated through multiple studies spanning many years.

Prior Gallup research has shown the economic costs of poor physical health, caregiving, depression, poor sleep, and obesity and smoking, among many other factors relating to the five essential elements of wellbeing. And the critical nature of holistic wellbeing — compared with physical wellness alone — is proven to result in substantially reduced unplanned absenteeism, accidents on the job that result in workers’ compensation claims and turnover. This is the first time, however, that Gallup has quantified the economic cost of worker mental health generally as an overriding condition.

Mental health is not a problem that is unique to the U.S.

Globally, nearly four in 10 adults aged 15 or over either endure significant depression and anxiety themselves or have a close friend or family member who suffers from it. The serious increase of global unhappiness, in turn, reveals a steadily rising percentage of people over the last 10 years who report significant amounts of anger, stress, worry, sadness and physical pain the day before, reaching a new high in 2021. And, in the U.S., the disturbing rise of deaths of despair has been linked to declining employment opportunities for those without a college degree and subsequent wellbeing-related psychological associations, including a sense of belonging, self-worth, meaning and purpose, and prospects for advancement in the global economy. While not unique to rural White males, this trend is particularly acute for these particular non-college-educated individuals.

The roles that wellbeing and experiences associated with it can play in mitigating key aspects of poor mental health are significant.

Healthy eating, for example, has been linked to a lower likelihood of depression, while those who are fully employed report roughly half the rate of depression as those who are unemployed or involuntarily partially employed. And while each influences the other, prior Gallup longitudinal research that tracked over 11,000 adults over time has shown that wellbeing has a 54% stronger causal influence on future depression and anxiety than the other way around. As such, the critically important role of leaders in supporting and buttressing a culture of wellbeing in the workplace has never been greater.