AR technology generally reflects, refracts, and diffracts the light beam emitted by the microdisplay screen through optical elements, then projects it onto the human retina. When designing an AR optical system, the following factors need to be considered:

· The transmittance of ambient light

· The size and weight of the optical module

· The larger, the better Field of View (FOV)

“Micro LED + optical waveguide” is the best combination for optical modules and the best solution for the display of AR glasses.

For microdisplays, the LCOS solution had a market share of 10% in 2021 and will maintain a growth rate of 119% in the next few years. In the meantime, 2022 is the first year of Micro LED shipment. With its excellent performance, Micro LED is expected to become the most prominent technology used as microdisplays on AR by 2027, with market size of USD 2.6 billion, accounting for nearly 40% of the total market share, according to Yole.

For optical solutions, the advantage of the non-optical waveguide solution is that the design, preparation, and manufacturing technology is relatively mature; meanwhile, its disadvantages are apparent, including the incompatibility of FOV, eye movement range, and size. Therefore, non-optical waveguide plans usually are larger in size and smaller in eye movement range.

Compared to the non-optical waveguide, the optical waveguide makes three indicators that are mentioned above interdependence and reduced size, which makes it the most humanized solution for Near Eye Devices (NEDs) like AR glasses. Based on the advantages of comprehensive performance and mass production, the professionals in the industry believe that optical waveguide technology in AR glasses will become a cutting-edge solution in the future. Yole predicts that the penetration rate of waveguide technology in AR devices will gradually increase from 38% in 2021 to 99% in 2027.

(a) ROE: uses a molded plastic substrate to guide the light waves and semi-reflective mirror in front of the eye. It can achieve a high level of image quality, including color and contrast, but there are three difficulties with it: first, it is difficult to reduce the volume of the in- and out-couplers; second, the light and dark stripes of optical waveguides; third, mass production is challenging. Due to the cumbersome manufacturing process and low yield, few glasses products can be mass-produced by firms on a large scale.

(b) DOE: generally referred to as diffractive waveguide with Surface Relief Gratings (SRG). It has the advantages of thinness, a large field of view, and extensive eye movement range. It is generally considered to be the mainstream display technology solution in the AR industry by some industry insiders.

(c) HOE: these are structured like DOE, with holographic optical elements (HOEs) or Volume Holographic Gratings (VHG). It has the characteristics of highly high diffraction efficiency, large field of view, extremely high transparency, light and thin structure, mass production, short processing cycle, low cost, and high yield. Still, it has a high requirement for materials, system design, and manufacturing. Currently limited by available materials, HOE has not yet reached the same level as surface relief gratings in terms of FOV, optical efficiency, and clarity. 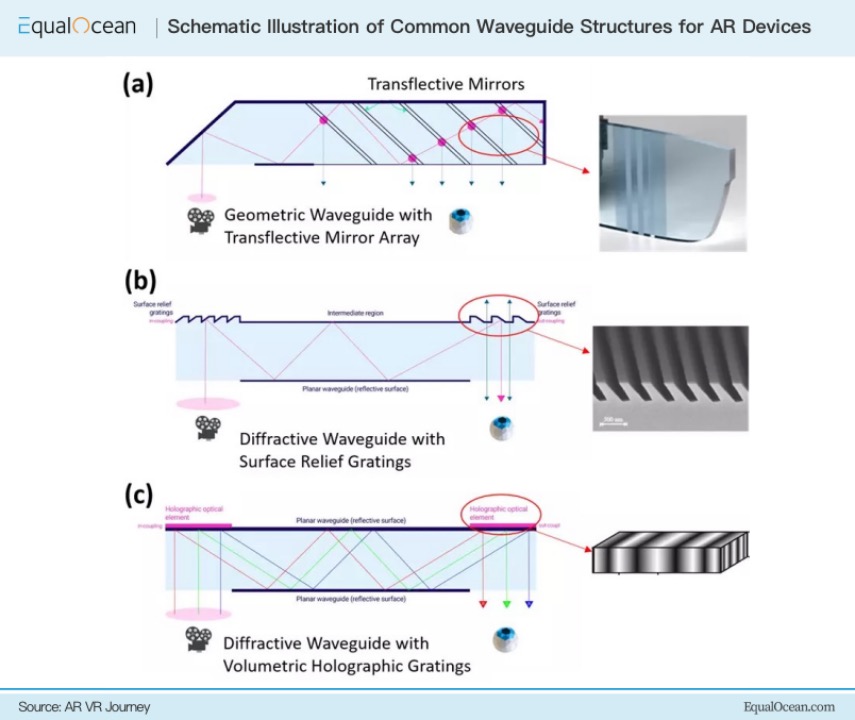 Chinese companies are committed to overcoming the problems of ROE for a high level of image quality, including color and contrast, which are part of the shortcomings of the DOE. The difficulties of DOE mainly manifested in the FOV and the uneven color in the eye frame, that is, the “rainbow effect.” In addition, since the diffractive element will form multiple orders of diffraction, there will also be other orders of diffraction energy on the outside of the optical waveguide display lens, showing the phenomenon of light leakage.

Problems of DOE are hard to be solved in a short time. Compared to DOE, the development period, including the trial production and transformation of the HOE production line, is shorter, usually taking 1 to 2 days. In contrast, the processing cycle for DOE takes six months and costs millions of CNY.

To the future trend, HOE has high diffraction efficiency, large field of view, high transparency, light and thin structure, short processing cycle, low cost, and high yield. According to the above information, HOE is expected to be the most widely used solution for the optical module to reduce AR glasses cost and increase quantity and quality.

The exploration of the optical waveguide is continuing. Due to the high barriers in technology to enter, the increased bargaining power of suppliers, and the increasing demand for AR glasses makers, the upstream optical waveguide manufacturers have started to profit. Based on this fact, the key factors that determine who will survive and lead the industry include the breakthroughs in optical waveguide technologies, the yield rate of the production line, and then the capability to achieve mass production. 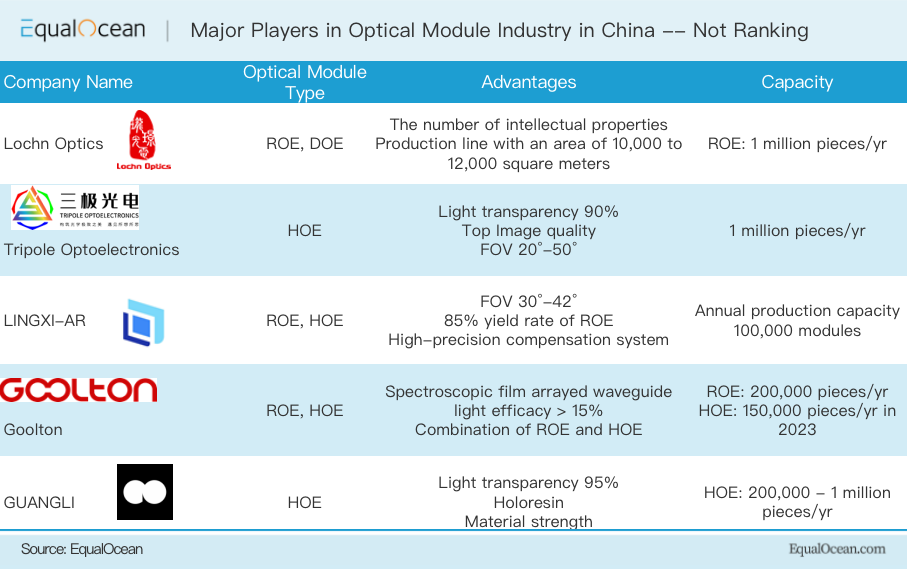 Tripole Optoelectronics (Chinese: 三极光电), a company that has a vital role in the HOE market in China, has technologies that can compete with global giants. The company’s factories locate in Suzhou and Nanchang in China, with an area of 7200 square meters.

Yuan Junqi, the founder and CEO of Tripole Optoelectronic, told EqualOcean that the company has advanced Automatic Exposure Control (AEC) devices that can proceed lithography exposure with low power laser in a short time. The AEC ensures the yield of HOE production since high power laser shrinks the size of material. The company’s unique lithography process and its factories’ scale ensure its capacity to reach 1 million pieces per year.

LINGXI-AR (Chinese:灵犀微光), a Chinese optical waveguide company, is committed to the R&D of ROE and DOE.

Yu Zheng, the founder and CEO of the company, told EqualOcean that LINGXI-AR is the only company in China to develop high-precision compensation system, enabling the company to produce internationally recognized optical waveguides through a more stable manufacturing process at a lower cost.

In terms of DOE, LINGXI-AR has already broken foreign monopoly on photosensitive materials and other core technologies. Meanwhile, they have incorporated monochrome waveguides and full RGB ones into its finished products.

The company is innovative in designing different types of optical waveguides. Cui Haitao, the founder and CEO of Goolton, told us that the firm has a patent on a technology that combines HOE and ROE and exclusively developed a spectroscopic film arrayed waveguide.

The current solution of the optical module of Goolton is Micro OLED + ROE, but the existing problem of the solution is lack of lightness. To solve that, Goolton changed the original plan and improved the light efficacy to 15%.

Lochn Optics (Chinese: 珑璟光电), the only Chinese company in the top 10 companies that have the most optical waveguide-related intellectual properties, is planning to build the first AR visual industrial park in China with an area of 100,000 square meters.

The company has the most complete ROE waveguide production line with an area of 10,000 to 12,000 square meters in China; meanwhile, it is achieving breakthroughs in the size of modules and ROE technologies, including oblique grating, R&D on masters, and engraving.

Keith Kang, the Vice President of Lochn Optics, told EqualOcean that it is expected that the DOE waveguide will achieve mass production in 2023.

Guangli Technology (Chinese: 光粒科技) is committed to developing authentic AR glasses for consumers; at the same time, it is achieving breakthroughs in the holographic waveguide. The company is the first company in the world to mass-produce Holoresin, a holographic waveguide with resin as the lens material, and launch mature products.

Under the situation that HOE materials are monopolized by companies abroad, Guangli has been paying attention to developing new materials. For example, its holographic photosynthetic glue, a type of photosensitive material, is unique in the market. Guangli exclusively owns the formula of the material, according to which Zhang Zhuopeng, the founder and CEO of Guangli, told us that the firm is the only one in the industry regarding formula system-related patents.

Industry giants in China are still waiting and observing the optical waveguide industry, while small and medium-sized companies have already put resources into the R&D of waveguide technologies, which has shown the effect.

AR, as a rising industry, is an opportunity for technology-focused companies. Giants in an old industry will never be in the same position when they enter a new sector.