The Monster Buffalo Snowstorm Probably Set a Record. More Is on the Way. 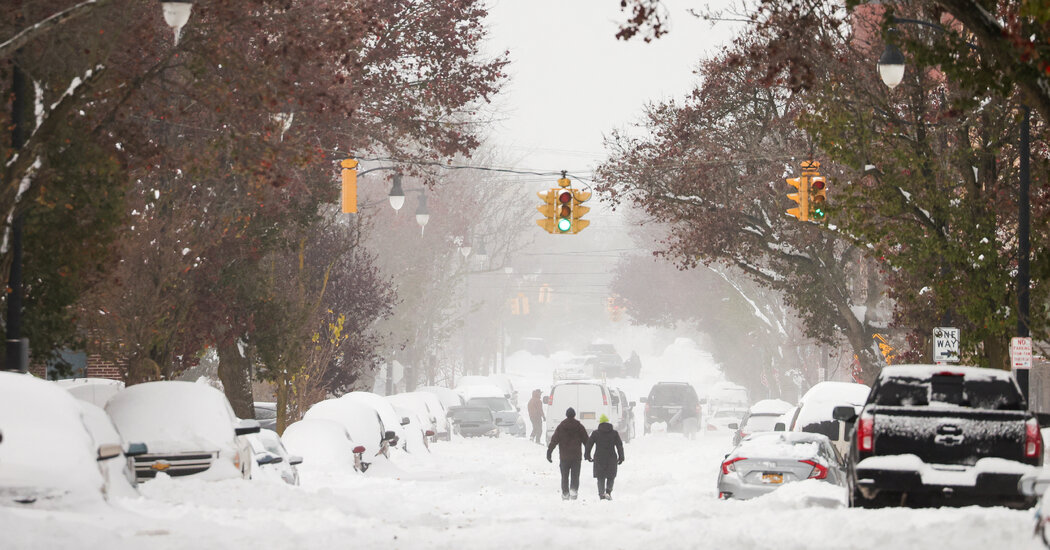 BUFFALO — The city of Buffalo, where heavy snow is commonly met with a shrug and a shovel, awoke on Saturday to chest-high drifts left by a lake-effect storm that ran roughshod over roadways. Forecasters promised a continued pummeling overnight.

Officials said the storm appeared to drop a record amount of snow for Erie County in a 24-hour period — up to six inches per hour at times, leaving more than 50, 60 and even 70 inches over the whited-out region. Wind roared through Buffalo’s city corridors, picking up snow and flinging it sideways wherever it chose. And in parts of the region south of the city, snowfall totals crept above six feet, even as the storm shifted north.

County officials said two people had died as a result of the storm. There were 280 people rescued in the area, and some 1,600 without power. The storm was also expected to strengthen and return later Saturday, dumping another six inches of snow or more.

The county’s prior record for snowfall in a 24-hour period, 47.5 inches, was set during a massive storm in 2014 that left more than 86 inches by its third day. It was unclear Saturday how much snow fell in the same area during the current storm, but reports from Orchard Park suggested more than 50 inches fell on Friday alone.

“We believe we’ll be making history with having the most amount of snowfall in a 24-hour period right here in the state of New York,” Gov. Kathy Hochul said at a news conference Saturday. “Never happened like this before.”

Alex Mayne, 26, took advantage of a midday respite to try to free his car from a shoulder of Hertel Avenue and visit an elderly family member. Two neighbors arrived to help push — “A very Buffalo thing to do,” Mr. Mayne said.

South of the city, travel was nearly impossible in the hardest hit areas as the storm threatened to upend plans for Thanksgiving throughout the region.

Thomas Headon, 22, a musician from England, was traveling from Boston to Chicago on Friday with nine other people, when the storm forced their tour bus to stop on the side of the road in Orchard Park. (The Buffalo Bills, whose home stadium is in Orchard Park, had already had their Sunday afternoon game moved to Detroit.).

Mr. Headon and his fellow travelers used a generator on the bus to stay warm overnight, he said, but his scheduled show in Chicago on Saturday was canceled, costing him thousands of dollars.

But after loading up on food and beer at a nearby supermarket, the group was going to try and make it to Toronto for its next gig.

Gov. Hochul, a Democrat and Buffalo native, had already declared a state of emergency for 11 counties, including some adjacent to Lake Ontario in New York’s northern borderland with Canada, where the storm was also roaring. She was scheduled to appear at a news conference in Hamburg, a particularly hard-hit town about 15 miles south of downtown Buffalo on Saturday afternoon.

Most businesses in Orchard Park remained closed on Saturday with deep snow blanketing parking lots and entrances. Plows and backhoes of every size were ubiquitous throughout the area, clearing roadways as emergency and utility vehicles wove through town.

Midday Saturday, Greg Shiltz, 47, of Orchard Park, was standing on top of his red pickup truck and shoveling off a few feet of snow after spending about four hours digging out of his driveway Saturday.

“I’m finally catching up,” he said.

“There’s been a lot of snow,” he added. “But it’s better than a tornado. It will eventually melt.”