The Political Backdrop of Letitia James’s Lawsuit Against Trump 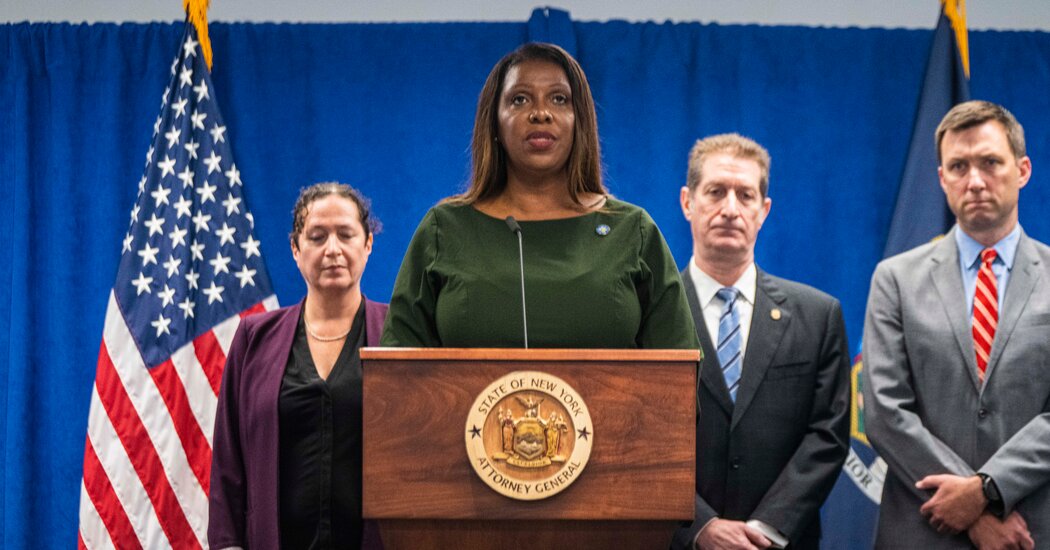 Democrats have spent six years waiting for someone to hold former President Donald J. Trump accountable for what they see as a lifetime of evading consequences for his actions.

On Wednesday, Letitia James, the New York attorney general, filed a lawsuit accusing the former president, his family business and three of his children of inflating the value of his assets by billions of dollars, as Jonah E. Bromwich, William K. Rashbaum and Ben Protess report.

Announcing the lawsuit at a news conference in downtown Manhattan, Ms. James tried to minimize the politics at play.

She rattled off statistics to highlight the breadth of the three-year investigation: interviews with over 65 witnesses; millions of documents; a complaint more than 200 pages long, with examples from more than 23 assets. Her office found over 200 false valuations, she said, calling it evidence of a scheme that she characterized as “astounding.”

But Ms. James, a Democrat, also trotted out a catchphrase that had the whiff of the kind of branding that has made Mr. Trump a survivor over his four decades in business and politics.

Claiming money that you do not have, Ms. James said, is not “the art of the deal” but rather “the art of the steal” — a reference to Mr. Trump’s 1987 memoir that established him in the public imagination as an icon of Manhattan’s high-flying real estate sector.

A new batch of Mr. Trump’s legal woes in the headlines is certain to be unwelcome news for the Republican Party, which has steadily distanced itself from the former president’s tangles with the Justice Department over the classified documents he kept at Mar-a-Lago after his presidency ended.

And those headlines are something of a political gift to Democrats, who have been desperate to tie Republican candidates up and down the ballot to a former president who remains deeply unpopular among the public at large.

But Mr. Trump and his allies are clearly hoping they can deflect whatever political fallout Ms. James’s lawsuit inspires by drawing on past legal battles — all of which, so far, the longtime real estate baron has survived with the agility of an alley cat.

Ms. James’s political ambition has long been a focus of Republicans seeking to depict her investigation into Mr. Trump as tainted. Ms. James, who was elected to the office in 2018 and is running for re-election in November, contemplated a run for governor this year. She pulled back after it became clear that Gov. Kathy Hochul of New York was in a strong position heading into her Democratic primary — which she went on to win by nearly 50 percentage points.

The origins of the inquiry. The investigation started after Michael D. Cohen, Mr. Trump’s former personal lawyer and fixer, testified to Congress that Mr. Trump and his employees had manipulated his net worth to suit his interests.

As state attorney general, she lacks the authority to criminally charge Mr. Trump in this case (though she referred the findings to prosecutors). But in 2018, during her campaign for her office, Ms. James said she believed that Mr. Trump, who was then the president, “can be indicted for criminal offenses.”

Legal experts criticized those remarks at the time as a breach of law-enforcement protocol.

And Mr. Trump called Ms. James, who is Black, a “racist” — and dismissed her entire investigation using a stock phrase he employed throughout the Russia investigation and two congressional impeachment inquiries: “witch hunt.”

During an interview this summer, Ms. James said, “This has nothing to do with politics. It has to do with the law.”

In the same appearance — during a live taping of Pod Save America, a political podcast run by former aides to former President Barack Obama — she said, “We all know that he used funny numbers in his financial documents,” adding, “And he got caught.”

Judges have sided with Ms. James on several occasions, rejecting the assertion from Mr. Trump’s lawyers that she has a political vendetta.

Ms. James has amassed what former prosecutors describe as a compelling set of facts, though many caution that proving in court that the Trump Organization knowingly provided fraudulent valuations could be difficult.

But Mr. Trump has survived dozens of lawsuits, investigations and political hard knocks over the years through sheer force of will and a willingness to shade or misrepresent the facts — and she has given him ample material to work with.

On Wednesday, Mr. Trump and his allies said little of substance in response to the allegations, but they immediately brought out the same playbook that was used to convince his supporters that Republicans like James Comey, the former F.B.I. director, Representative Liz Cheney and a good chunk of his former top aides are all political hacks who are out to get him.

Mr. Trump’s son Donald Trump Jr. posted, “This is all about politics,” while his younger brother, Eric, called it “a joke” and accused Ms. James of “working for the D.N.C.”

A lawyer for Mr. Trump, Alina Habba, said in a statement, “Today’s filing is neither focused on the facts nor the law — rather, it is solely focused on advancing the attorney general’s political agenda,” but the statement did not dispute any specific facts in the complaint.

Whatever the underlying truth of the Trump Organization’s finances, Mr. Trump’s image as a successful businessman has long been integral to his political appeal.

Some political analysts credit his star turn in “The Apprentice,” the NBC reality show that beamed him into living rooms across America and helped turn him from a Manhattan real estate mogul into a national figure, with his stunning political upset over Hillary Clinton in 2016.

For that reason alone, Ms. James’s lawsuit carries political risks for Mr. Trump as well as legal ones.

If her lawsuit is successful, the Trumps will be barred from operating a business in New York, effectively chasing them out of the state that gave rise to their empire.