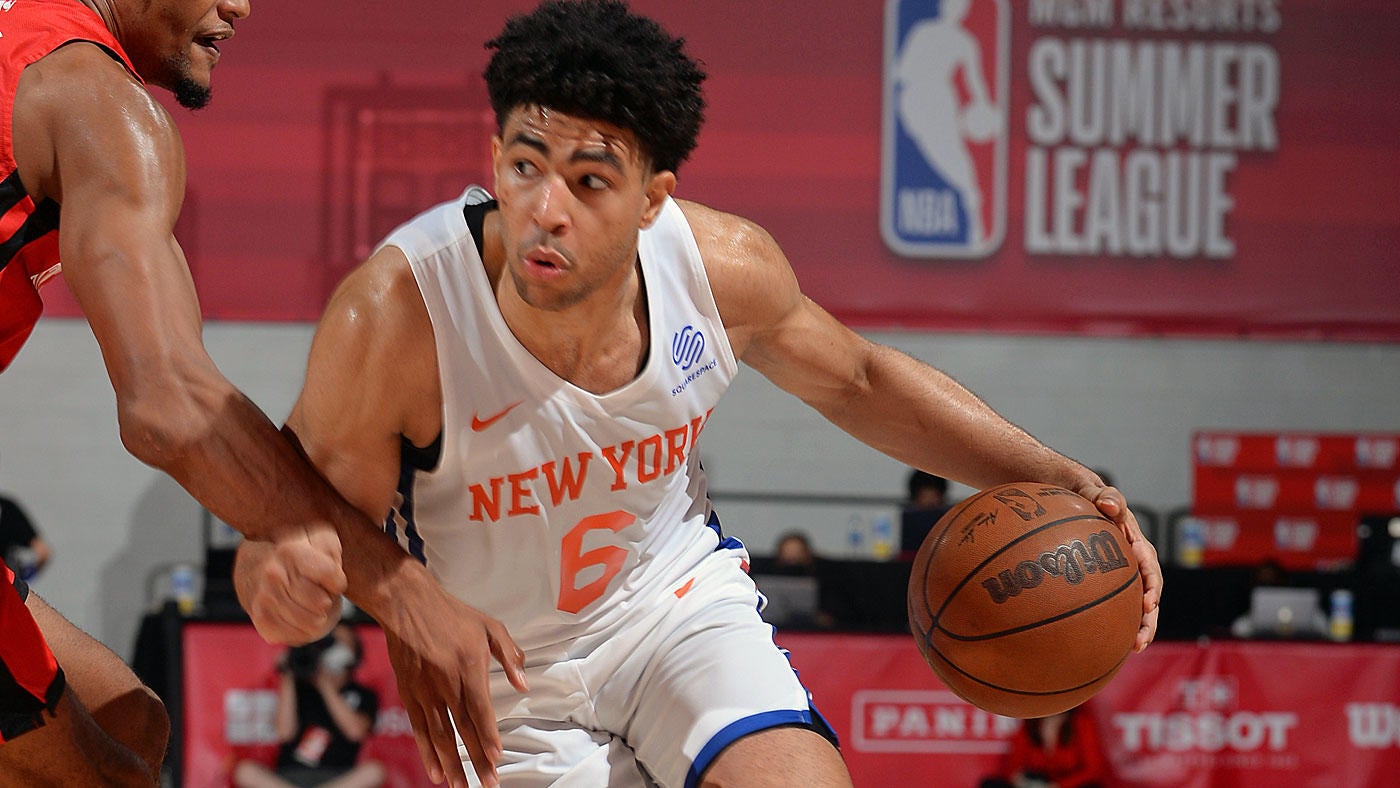 As a general rule, NBA teams are hesitant to trade young, homegrown talent. This is particularly true if said talent was undervalued by the rest of the league. When executives find gems late in the first round, anywhere in the second or on the scrap heap, they get attached. These players’ successes reflect well on their teams’ scouting and development programs. Often they are diligent workers and beloved teammates, the kind of guys that bring good vibes to the practice facility and become fan favorites.

Almost every team is obsessed with drafting and developing well, though, in part because this allows you to trade for stars. Typically, when a player like Donovan Mitchell is on the trade market, he will not be swapped for another multi-time All-Star at a similar stage of his career. He’ll be swapped for draft picks and younger, cheaper players who could potentially turn into All-Stars one day.

Enter 22-year-old Quentin Grimes. He’s a 6-foot-4 wing with a 6-8 wingspan, and the New York Knicks selected him No. 25 in the 2021 draft. He averaged six points, two boards and one assist in 17 minutes as a rookie, with 40-38-68 shooting splits. These numbers do not suggest future stardom, nor do they suggest that he should be off-limits in trade talks. And yet the Knicks have reportedly taken a firm stance when negotiating with the Utah Jazz: Grimes is off limits.

In an interview with ESPN 700, The Athletic’s Tony Jones said that New York is willing to part with 24-year-old big Obi Toppin in a Mitchell deal, but Utah wants Grimes:

If your take on this information is an incredulous, “Sure, this guy with a 14.9 percent usage rate is why the Knicks haven’t traded for Mitchell, whatever you say,” then you might want to punctuate it with a Rodrigue Beaubois reference. In February 2010, leading up to the trade deadline, Dallas Mavericks owner Mark Cuban said that a rookie Beaubois — the No. 25 pick, just like Grimes — was “pretty much untouchable.”

“There’s maybe one or two guys in the league that I would trade him for,” Cuban said. “That’s it.”

Beaubois had an encouraging rookie year, including a 40-point game in March, but his progress stalled when he broke his foot the following summer. He needed another surgery on the same foot after his second season, and, since breaking his hand in 2013, his fourth and final season with the Mavericks, Beaubois has been playing in Europe. I was a big Beaubois guy, but I admit he should never have been untouchable.

At All-Star weekend in 2011, the Knicks had a late-night meeting with the Denver Nuggets to negotiate a Carmelo Anthony trade. Anthony himself was in the meeting, along with his then-agent, Leon Rose, who is now New York’s team president. The Knicks and Nuggets had been talking since the previous summer, but this was different: Anthony watched the two sides haggling over picks and players. One of them was rookie center Timofey Mozgov, who weeks earlier had scored 23 points and grabbed 14 rebounds in a win against a dysfunctional Detroit Pistons team, prompting fans at Madison Square Garden to chant his name down the stretch.

Mozgov had appeared in 34 NBA games and was averaging 4.0 points, 3.1 rebounds and 0.7 blocks in 13.5 minutes. Aside from that Pistons game, he had only scored in double figures once. But the Nuggets contingent, led by then-GM Masai Ujiri, insisted on getting him. “We want Mozgov, that was the deal,” Anthony recalled on ESPN’s “The Woj Pod,” laughing. “Timofey Mozgov. Mozgov was the dealbreaker in the New York trade.” The Knicks eventually relented, but they managed to hang onto rookie wing Landry Fields.

With the knowledge that Mozgov would top out as a solid role player and a mysterious nerve injury would derail Fields’ playing career, those negotiations seem silly. Years from now, it might seem equally silly that New York and Utah, two logical partners for this particular blockbuster, were hung up on a guy for whom looked excellent at summer league counts as perhaps his biggest professional accomplishment.

Counterpoint: Did you see Grimes at summer league?

Grimes was primarily a 3-and-D guy in his first season with the Knicks, a reliable wing who knocked down open jumpers, made good decisions and played physical perimeter defense. He built on the foundation he’d established in his two seasons at Houston, and there were flashes of the off-the-dribble playmaking that defined his game before his rough freshman year at Kansas. Fans wanted him to play more and hoped to see more of those flashes. In this respect, summer league was everything they had imagined and then some.

As a shooter, Grimes was a threat everywhere he went, willing to fire away from deep, off movement, in transition and off the dribble:

With the ball in his hands, he was just as assertive. Grimes attacked closeouts, and he also made plays out of pick-and-rolls and dribble-handoffs. He went at bigs who switched onto him, and he spoonfed center Jericho Sims with several slick passes.

Standing out at summer league does not guarantee anything. Just ask Beaubois or Anthony Randolph, another player deemed untouchable in the NBA who only found stable ground once he went overseas. The style in which Grimes played, though, suggests that he’s the type of player every team wants. At worst, he’ll complement star players well and take nothing off the table. At best, he’s primed for a Desmond Bane-esque leap in his second season.

That he’s undersized and unproven allows the Jazz to demand Grimes and multiple first-round picks in exchange for a guy who has dominated playoff games. He’s shown just enough upside, though, that both they and the Knicks reasonably want to see how his game grows. Sometimes, teams are vindicated for valuing their young guys highly — the Philadelphia 76ers reportedly refused to offer a rookie Tyrese Maxey to the Houston Rockets in James Harden packages in 2021, and they ended up getting Harden the next year, with Maxey in the midst of a breakout.

New York has been waiting years to acquire a star like Mitchell, but it makes sense that it isn’t giving up Grimes without a fight. Would it make sense for Grimes to be the reason that the Knicks don’t get Mitchell? Maybe not, but that’s not the way to look at it, anyway. In that interview on ESPN 700, Jones reported that Grimes wasn’t the only sticking point. New York’s best offer “contained a number of first-round picks, but most of them were protected rather than unprotected,” Jones said. The Jazz value the Knicks’ own unprotected picks more than protected firsts from other teams.

In other words, if New York is willing to trade all the picks that Utah wants, then it can probably keep Grimes and get Mitchell. Earlier this offseason, Jazz president Danny Ainge “pushed hard” to get Jaden McDaniels from the Minnesota Timberwolves in a Rudy Gobert deal, per The Athletic’s Jon Krawczynski and Jones. When the Wolves held their ground on McDaniels, Utah asked for more picks instead. The Knicks aren’t exactly weighing what Grimes might be against what Mitchell already is; they’re weighing what he might be against what it would cost to keep him out of the deal.