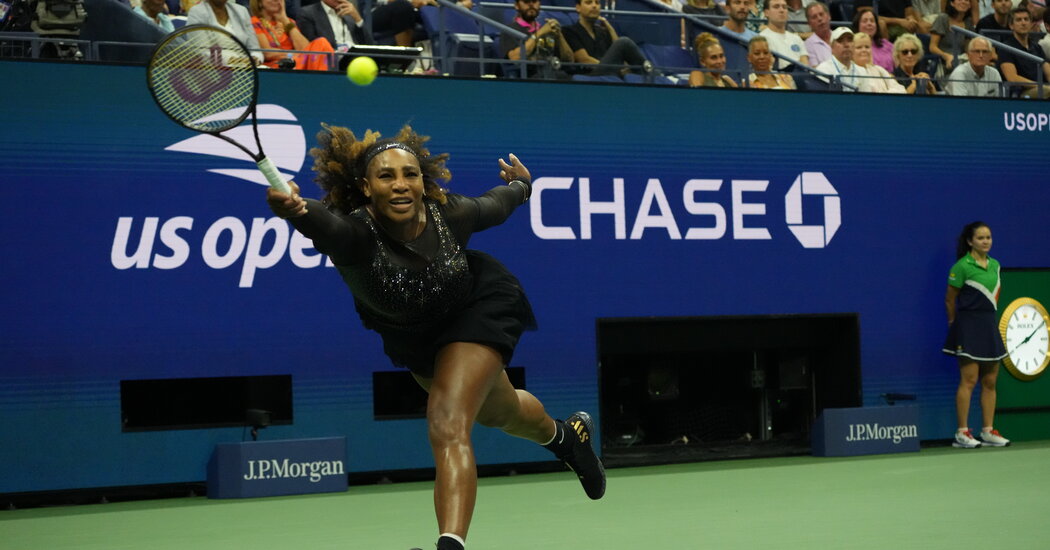 It’s one of those sports stories that has become big enough to fascinate even people who don’t normally follow sports. At 7 p.m. Eastern tonight, Serena Williams’s improbable run at what seems to be her final U.S. Open will continue. To put it in context, my colleague Kurt Streeter — a Times columnist who played competitive tennis when he was young — is taking over today’s newsletter. — David Leonhardt

So far, so Serena.

As has happened repeatedly during the past two decades, the U.S. Open is feeding off the electric energy provided by Serena Williams. She is, of course, one of several hundred professional tennis players at Flushing Meadows, a list that includes legends such as Rafael Nadal and promising upstarts like Coco Gauff.

But as long as she remains in the hunt for her 24th Grand Slam singles title, Serena will be the prime mover here. Everyone else is playing in her orbit.

And wow, what an orbit it is at Flushing Meadows now. I’ve played a lot of tennis in my life — I was the first Black captain of the men’s tennis team at the University of California, Berkeley — and I’ve watched a ton of great, big-time sporting events as a reporter. Serena’s matches so far, especially her first round in singles, go down as some of the most diverse events I’ve ever witnessed. To me, the crowd looked very much like New York, and that says a lot.

Think of all the memorable moments Serena has had playing under the bright lights in Queens. Six singles titles, the last in 2014. Ten trips to the championship match, most recently in 2019.

Consider the dramatic comebacks and the smattering of contests that have ended in deep controversy (see: Osaka, Naomi, U.S. Open, 2018). Remember that she has barely played on the tour over the past year, and that when she has, she’s looked flat-out average and very much her 40 years.

And yet her match on Wednesday night, a stirring three-set win over No. 2 seed Anett Kontaveit, may well go down as one of her most memorable. The crowd of 29,959 spectators — a record for a U.S. Open night session — swooned and shouted for their heroine to battle back and come through, all with hurricane-force energy that shook Arthur Ashe Stadium stadium to its foundation.

Beat back the young, fresh-legged No. 2 seed and rise from the depths after an ugly second set by conjuring some of the old genius? Yep, that’s so very Serena. Perfectly on brand.

As always, Serena dismissed the doubters and played with an eye-popping gusto. I got goose bumps, and I wasn’t the only one.

Of course, the extra attention showered upon Serena comes from her recent announcement that she plans to “evolve” away from tennis so she can devote full attention to having a second child, running her fashion business and working as a venture capitalist.

It’s assumed that this event will be the last time we see her play meaningful tennis.

Maybe not, if she continues with matches like those she had this week — when she moved like the younger version of herself and backed up her scrambling with body blows.

One of the pleasures of any tennis Grand Slam is the opportunity to see the full range of tennis stars. They are everywhere in Flushing Meadows now — with their gusting strokes and variety of techniques and personalities. Look over there, it’s Gauff, or the top-seeded female player, Iga Swiatek, swatting laser forehands! The scene here is a slice of tennis heaven — combustible, uber-talented Nick Kyrgios on one court, Nadal on another.

But right now, all the other players seem to be warm-up acts. Serena is the big show, the main attraction, as she should be.

Brittney Griner might not be imprisoned in Russia if she and other W.N.B.A. stars were paid more fairly in America, Mary Pilon argues.

Advice from Wirecutter: The best checked suitcases and carry-on backpacks.

Lives Lived: In 1982, PBS broadcast a documentary about the Brooklyn Bridge made by Amy Stechler and three others. The film earned an Oscar nomination but made only one of its creators — Ken Burns, then Stechler’s husband — a household name. She died at 67.

SPORTS NEWS FROM THE ATHLETIC

A major N.B.A. puzzle piece finds a home: The Cleveland Cavaliers went for broke with a massive trade, acquiring Utah Jazz All-Star Donovan Mitchell and instantly slingshotting themselves into the upper echelons of the N.B.A.’s Eastern Conference. Zach Harper gives the Cavs high marks. But could Utah have done better?

College football begins: No. 17 Pittsburgh, No. 12 Oklahoma State and Penn State were among the winners as Week 1 of the 2022 season got underway last night. Ready to lock in Saturday? Get caught up on season predictions and Bruce Feldman’s picks against the spread.

Back on the dance floor

For more than 30 years, New Yorkers have flocked to the Upper West Side for Midsummer Night Swing — three weeks of dancing under the stars. This summer, after two years of pandemic cancellations, the festival has returned.

The dancers have long been fixtures in each other’s lives, even if they didn’t necessarily know one another’s names. “You realize they’re important to you even though they’re semi-strangers,” said Mai Yee, who has attended for more than 20 years. “It was like ‘Oh my God, you’re here — we survived this!’”

During the pandemic, W.R. Tucker, 88, continued to dance. “New York was about to die, but I danced in the house,” Tucker said. “To be here right now feels like a new life.”

Thanks for spending part of your morning with The Times. See you tomorrow. — David