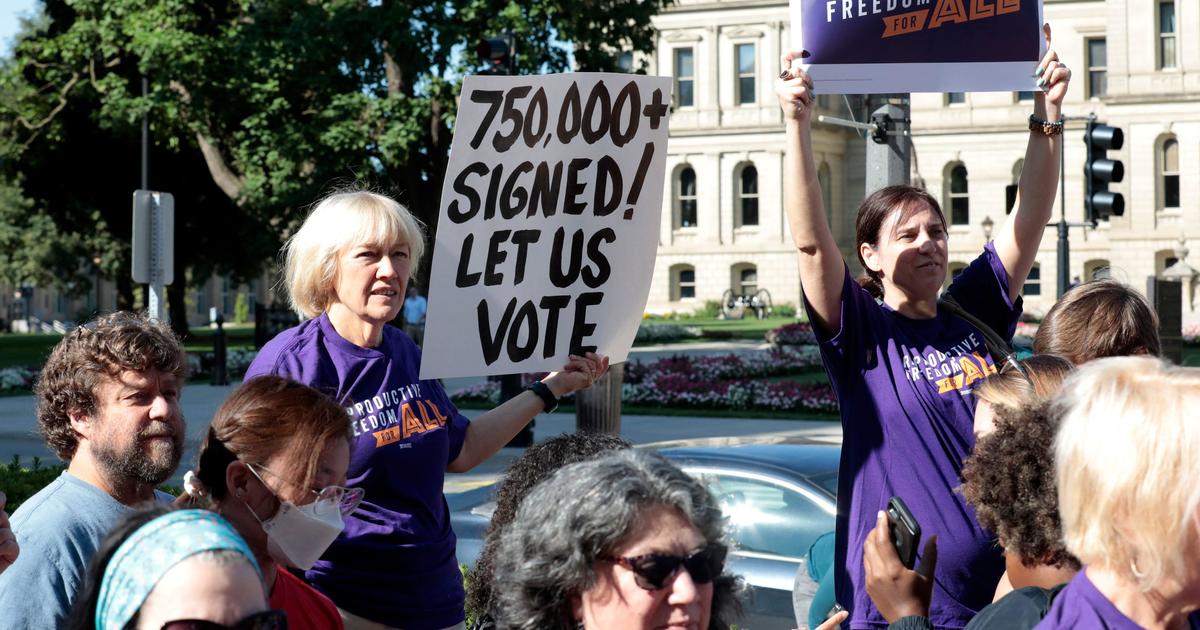 Washington — Abortion rights has emerged among the top issues motivating voters this election cycle after the Supreme Court rolled back the constitutional right to an abortion, and in some states, questions deciding the future of abortion access will be on the ballot next month.

The November elections will decide which party controls the House and Senate, and in Senate races in Arizona, Georgia and Pennsylvania, voters who rank the issue as very important favor Democratic candidates over their Republican opponents, recent polls conducted by CBS News found.

But in five other states, the issue of abortion will be directly before voters when they head to the polls in November and, in addition to casting their votes for federal and state offices, they’ll weigh in on ballot initiatives that seek to either protect the right to abortion or restrict access.

Kansas was the first state to put the question of abortion rights before voters after the Supreme Court overruled Roe v. Wade when it included on the ballot for the August primaries a proposed constitutional amendment removing the right to an abortion from the Kansas Constitution.

Come November, voters in three states — California, Michigan and Vermont — will decide whether to enshrine abortion rights in their respective state constitutions, while in two others —Kentucky and Montana — proposals on the ballots seek to limit abortion rights.

Known as Proposition 1, the measure, if approved, would amend the California Constitution to include the right to reproductive freedom, which includes the right to choose to have an abortion and the right to contraceptives.

But even if the initiative is rejected by voters, abortion will remain legal in California. The state’s highest court has recognized the right to an abortion under the state constitution since 1969, and abortion is protected under state law.

Michigan’s ballot initiative, Proposal 3, proposes amending the state constitution to establish a new individual right to “reproductive freedom.” The measure would include the following:

The Reproductive Freedom for All campaign led the signature drive to get the initiative on the November ballot, but Michigan’s four-member Board of Canvassers deadlocked in August over allowing the measure to be included. The board’s two Democrats voted in favor, while the two Republicans opposed putting the proposed constitutional amendment on the ballot.

The Reproductive Freedom for All Campaign then appealed to the Michigan Supreme Court, which in September ordered the initiative to be placed on the November ballot.

While Michigan Gov. Gretchen Whitmer, a Democrat, supports abortion rights, the state has on the books a law from 1931 that makes performing an abortion a felony in most instances. The ban lay dormant for nearly 50 years after the Supreme Court in 1973 established the constitutional right to an abortion, but the high court overruled its Roe decision in June, paving the way to allow the state’s 1931 abortion law to go into effect.

Though Michigan Attorney General Dana Nessel vowed not to enforce the pre-Roe ban, Planned Parenthood of Michigan and an abortion provider in the state filed a lawsuit in April arguing the 1931 law is unconstitutional and violates the state’s constitution.

In September, a state court judge invalidated the 90-year-old ban, finding it violates the Michigan Constitution.

Vermont is proposing amendment to the state constitution that would establish the right to “personal reproductive autonomy.”

The initiative, named Article 22, states that “an individual’s right to personal reproductive autonomy is central to the liberty and dignity to determine one’s own life course and shall not be denied or infringed unless justified by a compelling state interest achieved by the least restrictive means.”

Abortion is still legal in Vermont, as the state legislature passed and the governor signed in 2019 legislation that preserved the right to abortion and prohibited the state from interfering with or restricting a person’s choice to end a pregnancy. State lawmakers also approved that year Proposal 5, starting the process for the state constitution to be amended to protect abortion access.

Both chambers of the state legislature again approved the proposal this year, paving the way for the ballot initiative to be put before voters next month.

Kentucky voters will decide in November whether to amend the state constitution to declare it does not protect the right to an abortion and to prohibit state funding for abortion.

Constitutional Amendment 2 asks voters whether they favor changing the Kentucky Constitution to create a new section that states that “to protect human life, nothing in this Constitution shall be construed to secure or protect a right to abortion or require the funding of abortion.”

Kentucky’s Republican-controlled General Assembly approved in 2021 a measure to put the proposed constitutional amendment to voters. The state legislature also approved a “trigger” law banning nearly all abortions in the state in the event of Roe’s reversal, as well as a law banning abortions after six weeks of pregnancy.

Abortion clinics challenged both restrictions, and in July, a state court judge blocked the state from enforcing the two measures, finding they likely violate the rights to privacy and self-determination protected by the Kentucky Constitution.

But a Kentucky appeals court reinstated the abortion bans, rendering most abortions illegal in the state for now.

Montana voters will weigh in on a legislative referendum adopting the Born-Alive Infant Protection Act, which declares infants born alive, including after an abortion, are legal persons. The bill also imposes criminal penalties on health care providers that do not take “medically appropriate and reasonable actions” to preserve the lives of these infants.

The measure states a born-alive infant is one “who breathes, has a beating heart, or has definite movement of voluntary muscles, after the complete expulsion or extraction from the mother.” The proposal also establishes that a “born-alive infant is entitled to medically appropriate care and treatment.”

If approved by voters, the law would take effect Jan. 1, and medical providers found guilty of violating the measure would face a fine of up to $50,000 or up to 20 years in state prison.

Montana law allows abortions to be performed up to fetal viability, and the state’s supreme court held in 1999 that the Montana Constitution’s right of individual privacy includes a right to “procreative autonomy” that protects the right to an abortion.

The state legislature enacted numerous abortion limits in 2021, including a 20-week abortion ban, restrictions on medication abortion, and an ultrasound requirement. But the Montana Supreme Court in August upheld a lower court ruling that temporarily blocks the three restrictions while proceedings continue.

A 2016 analysis from the Centers for Disease Control and Prevention examining infant deaths for the 12-year period from 2003 to 2014 where the death certificate mentions the code for termination of pregnancy found that 143 “could be definitively classified as involving an induced termination.”

The terms reported on death certificates that indicate an induced termination of pregnancy range from abortion for maternal medical reasons to attempted self-abortion to elective abortion to induced loss of pregnancy.

Additionally, there are existing laws on the books at the federal and state levels that would protect infants as soon as they’re born and likely apply to medical providers who withhold care.