This Minnesota Race Will Show the Potency of Crime vs. Abortion 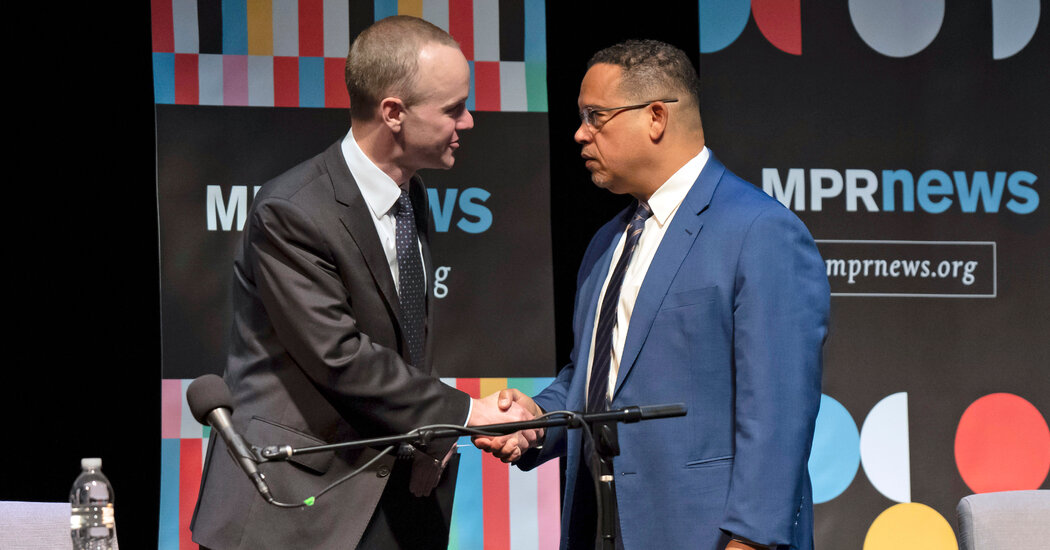 WAYZATA, Minn. — Here in light-blue Minnesota, where I’m traveling this week, there’s a race that offers a pure test of which issue is likely to be more politically decisive: abortion rights or crime.

Keith Ellison, the incumbent attorney general and a Democrat, insists that his bid for re-election will hinge on abortion, which remains legal in Minnesota.

But his Republican challenger, Jim Schultz, says the contest is about public safety and what he argues are “extreme” policies that Ellison endorsed after the 2020 murder of George Floyd in Minneapolis — the aftermath of which Minnesota is still wrestling with.

Schultz, a lawyer and first-time candidate, said in an interview that watching Floyd’s death under the knee of Derek Chauvin, a police officer who was later convicted of murder, had made him “physically ill.” He added that Ellison’s prosecution of Chauvin was “appropriate” and that he supported banning the use of chokeholds and what he called “warrior-style police training.”

But Schultz, a 36-year-old graduate of Harvard Law School who has worked most recently as the in-house counsel for an investment firm, was scathing in his assessment of Ellison, presenting himself as the common-sense opponent of what he characterized as a “crazy anti-police ideology.”

He decided to run against Ellison, he said, because he thought it was “immoral to embrace policies that led to an increase in crime in at-risk communities.”

Ellison fired right back, accusing Schultz of misrepresenting the job of attorney general, which has traditionally focused on protecting consumers. County prosecutors, he said in an interview, were the ones primarily responsible for crime under Minnesota law — but he noted that his office had prosecuted nearly 50 people of violent crimes and had always helped counties when asked.

“He’s trying to demagogue crime, Willie Horton-style,” Ellison said, referring to a Black man who was used in a notorious attack ad in the 1988 presidential election that was widely seen as racist fearmongering. Schultz’s plans, he warned, would “demolish” the attorney general’s office and undermine its work on “corporate accountability.”

“He’s never tried a case or stepped in a courtroom in his life,” Ellison added.

An upset victory by Schultz would reverberate: He would be the first Republican to win statewide office since Tim Pawlenty was re-elected as governor in 2006.

Ellison, 59, served six terms in Congress and rose to become a deputy chair of the Democratic National Committee. Before leaving Washington and winning his current office in 2018 — by only four percentage points — he was a rising star of the party’s progressive wing.

Both parties are making their final pitches ahead of the Nov. 8 election.

As one of the most prominent Democratic attorneys general of the Trump era, he has sued oil companies for what he called a “a campaign of deception” on climate change and has gone after pharmaceutical companies for promoting opioids.

But the politics of crime and criminal justice have shifted since Floyd’s killing, and not necessarily to Ellison’s advantage. In a recent poll of Minnesota voters, 20 percent listed crime as the most important issue facing the state, above even inflation.

Democrats would prefer to talk about Schultz’s view on abortion. They point to his former position on the board of the Human Life Alliance, a conservative group that opposes abortion rights and falsely suggests that abortion can increase the risk of breast cancer, as evidence that his real agenda is “an attempt to chip away at abortion access until it can be banned outright,” as Ken Martin, the chair of the Minnesota Democratic Party, put it. Democratic operatives told me that in their door-knocking forays, abortion was the topic most on voters’ minds — even among independents and moderate voters.

So Ellison has been talking up his plans to defend abortion rights and warning that Schultz would do the opposite.

“We will fight extradition if they come from another state, and we’ll go to court to fight for people’s right to travel and to do what is legal to do in the state of Minnesota,” Ellison said at a recent campaign stop. Schultz, he argued, “will use the office to interfere and undermine people’s right to make their own choices about reproductive health.”

Schultz denies having an aggressive anti-abortion agenda. Although he said he was “pro-life” and described himself as a “person of faith” — he is a practicing Catholic — he told me he “hadn’t gotten into this to drive abortion policy.” Abortion, he said, was a “peripheral issue” to the attorney general’s office he hopes to lead, and he pointed out that the Minnesota Supreme Court ruled the practice legal in 1995.

Historically, the attorney general’s office in Minnesota has focused on protecting consumers, leaving most criminal cases to local or federal prosecutors.

But none of that, Schultz insisted, is “written in stone.” The uptick in crime in Minneapolis, he said, was a “man-made disaster” that could be reversed with the right policies.

Ellison countered that Schultz “doesn’t know what he’s talking about” and cited four statutes that would have to be changed to shift the focus of the attorney general’s office from consumer protection to crime.

Schultz acknowledged his lack of courtroom experience but said he would hire aggressive criminal prosecutors if he won. He is promising to beef up the attorney general’s criminal division from its current staff of three lawyers to as many as three dozen and to use organized crime statutes to pursue “carjacking gangs.”

He’s been endorsed by sheriffs and police unions from across the state, many of whom are critical of Ellison’s embrace of a proposed overhaul of the Minneapolis Police Department, which fell apart in acrimony. Had it passed, the city would have renamed the police the Department of Public Safety and reallocated some of its budget to other uses.

Ellison, who lives in Minneapolis and whose son is a progressive member of the City Council, seems to recognize his political danger. But what he called Schultz’s “obsessive” focus on crime clearly frustrates him.

“He doesn’t really care about crime,” Ellison said at one point.

He also defended his support for the police overhaul in Minneapolis as necessary to create some space for meaningful change and challenged me to find an example of his having called to “defund the police” — “there isn’t one,” he said. And he noted that he had supported the governor’s budget, which included additional money for police departments.

Where it all began

Democrats in Minnesota insist that the crime issue is overblown — and murders, robberies, sex offenses and gun violence are down since last year. But according to the City of Minneapolis’s official numbers, other crimes are up: assault, burglaries, vandalism, car thefts and carjacking.

And it’s hard, traveling around the area where Floyd’s murder took place, to avoid the impression that Minneapolis is still reeling from the 2020 unrest. But there’s little agreement on who is to blame.

Boarded-up storefronts dot Uptown, a retail area where shopkeepers told me that the combination of the pandemic and the 2020 riots, which reached the neighborhood’s main thoroughfare of Hennepin Avenue, had driven customers away.

A couple of miles away, on a frigid Tuesday morning, I visited George Floyd Square, as the corner where he was killed is known. Iron sculptures in the shape of fists mark the four entrances to the intersection, which is covered in street art and shows lingering signs of the eruption of anger that followed Floyd’s murder.

A burned-out and graffitied former Speedway gas station now hosts a lengthy list of community demands, including the end of qualified immunity for police officers, which Schultz opposes. In an independent coffee shop on the adjoining corner, the proprietor showed me a photograph he had taken with Ellison — the lone Democratic politician, he said, to visit in recent months.

I was intercepted at the square by Marquise Bowie, a former felon and community activist who has become its self-appointed tour guide. Bowie runs a group called the George Floyd Global Memorial, and he invited me on a solemn “pilgrimage” of the site — stopping by murals depicting civil rights heroes of the past, the hallowed spot of asphalt where Floyd took his last breath and a nearby field of mock gravestones bearing the names of victims of police violence.

Bowie, who said he didn’t support defunding the police, complained that law enforcement agencies had abandoned the community. Little had changed since Floyd’s death, he said. And he confessed to wondering, as he intercepted two women who were visiting from Chicago, why so many people wanted to see the site but offer little in return.

“What good does taking a selfie at a place where a man died do?” he asked me. “This community is struggling with addiction, homelessness, poverty. They need help.”

What to read tonight

Thank you for reading On Politics, and for being a subscriber to The New York Times. — Blake

Read past editions of the newsletter here.

If you’re enjoying what you’re reading, please consider recommending it to others. They can sign up here. Browse all of our subscriber-only newsletters here.

Have feedback? Ideas for coverage? We’d love to hear from you. Email us at onpolitics@nytimes.com.