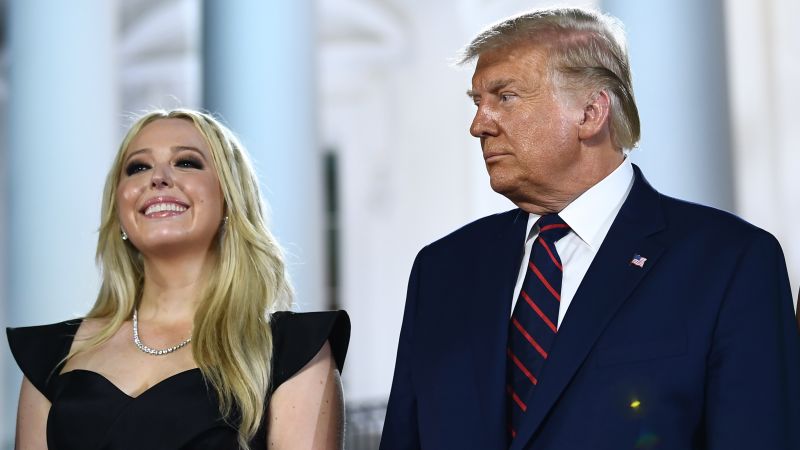 After three days on hurricane watch, Tiffany Trump breathed a sigh of relief.

The weather in Palm Beach, Florida, was finally easing and the forecast for Saturday, her wedding day, looked sunny and warm. Two people familiar with the bride-to-be’s mood tell CNN that Donald Trump’s younger daughter, his only child with second wife Marla Maples, had been “stressed” about the late-season storm and what it might mean for her Mar-a-Lago celebration with 25-year-old Michael Boulos, her boyfriend of four years.

But even though Tropical Storm Nicole is moving on, the Trumps may still be in for some tumult over the weekend. They’re gathering as their patriarch makes moves toward a 2024 presidential run, a prospect not everyone in the family is excited about. Some of them are signaling they don’t want to be involved much, if at all, sources close to the family tell CNN.

Three people familiar with the former president’s activities say he is not in the best of spirits. Many of the high-profile candidates he endorsed in the midterms failed to secure a win, and now some Republicans are whispering about his dwindling influence over the party. Trump is “cranky,” says one of the people.

At present, say those who are familiar, Trump is more focused on his “special announcement” on Tuesday, when he may – or may not – announce his planned third run for the presidency. His mind is consumed with the 2024 political landscape and where and how he will fit into it.

But first he has to get through one other job: Father of the bride.

Trump typically likes being the center of attention at his private club, which also serves as his home, but only if he’s being congratulated or in the mood for accolades. The run-up to Tiffany’s big day has been rough and, as the skies clear and Tiffany’s guests descend on Mar-a-Lago, sources say the former president is lying low.

Two of the people familiar with Trump’s mood say he has also been on the outs with his wife, Melania Trump, after a post-election day news report said she got the brunt of his ire after Dr. Mehmet Oz’s loss Tuesday in his run for the US Senate. The New York Times reported that Donald Trump blamed Melania Trump for his endorsement of the TV doctor; during a rally this year, he mentioned his wife was a big Oz fan.

Showing up in a news story is not something the ultra-private Melania Trump enjoys, and Trump was soon apologizing on Truth Social to her for what he called “made up” stories about her involvement. The damage, however, say the two people, was done. Plus, everyone steers clear of the former president when he’s in a bad mood, including his wife. CNN has reached out to a spokesperson for the former president.

Still, it’s a wedding, and an entire family cannot completely avoid one another. Tiffany Trump has close relationships with all of her half-siblings, say those who know her. Though she was often referred to as Trump’s “forgotten daughter” during the White House years, when older sister Ivanka Trump was center stage, Tiffany – who graduated from Georgetown Law in 2020 – is tight with her older sister. Ivanka was on-hand last weekend at Tiffany’s bridal shower, held at a friends’ home in Palm Beach, a celebration that included a tiered, Tiffany-blue cake, and also included her mother, Marla Maples, and her stepmother, Melania Trump. CNN has reached out to a spokesperson for Tiffany Trump for comment on this story.

Ivanka and Tiffany Trump still have a strong relationship, but elsewhere the family dynamic has been shifting over the past two years. Ivanka’s interactions with her father have changed since both left the White House. Now living in Miami, Ivanka is not wistful for Washington – “far from it,” says one of several people who spoke to CNN on condition of anonymity to preserve personal and professional relationships with the family. CNN reached out to a spokesperson for Ivanka Trump and did not receive a response.

Senior adviser to the president is not a role Ivanka Trump wishes to resurrect.

“[Ivanka] would never go back to that life,” says one of the people familiar with her thinking. “She knows it’s not something that would serve her or her family at this point.”

Another person says Ivanka has been “done” with Washington “since the day she left” and that “hasn’t changed.” A third person contends if Ivanka had any interest in taking part in politics again, people would have seen her on the campaign trail, pushing candidates for midterms. Yet she made zero appearances, or public endorsements, despite requests for participation by some of those in tight races, says a person with knowledge.

All of the people who spoke with CNN say Ivanka Trump’s life is centered around her three young children. Though she may not yet have had direct conversations with Donald Trump about her lack of interest in a second White House campaign, he is aware that any bid would not include the assistance of his daughter, says one of the people with knowledge of family discussions.

Trump would also lack the presence of his son-in-law, Jared Kushner, once the gatekeeper for President Trump while in the White House and one of the most connected and influential voices of his administration.

“Jared does not intend to join the campaign and get back involved,” says a source familiar with Kushner’s plans. CNN reached out to a spokesperson for Jared Kushner and did not receive a response.

The person maintains Kushner has a good relationship with his father-in-law and that he “makes an effort to be with (Trump),” but said he would do little more than offer the occasional piece of advice should Trump run again.

“I’m sure (Jared will) be tested in numerous different ways, he’s his father-in-law, but that said, it would be a far cry from helping in the way he helped before,” said the person. Kushner, who now runs a private equity firm, has “moved on,” from the last several years in a way Trump has not.

Trump is presumably aware of the lack of interest his wife, Ivanka and Jared have in campaigning. Melania Trump did little in the way of stumping for her husband during his first run for the White House and held only three solo campaign events on his behalf before the 2020 election.

There is no indication Melania Trump will change her habits and take an active part in any upcoming campaign. “Never say never” was all she would say when asked during a May interview if she could live in the White House again. In Ohio last week, during a rally for JD Vance, where it was rumored Trump might announce his latest presidential run, there were only four chairs set up for Trump family. They were designated for Eric and Lara Trump, and Donald Trump Jr. and Kimberly Guilfoyle.

Donald Trump, Jr., is sending different signals to his friends. “Of course!” is the answer from a person familiar with Don Jr.’s thinking when asked if Trump’s son will campaign on his behalf, should he announce his candidacy next week. Don Jr. has none of his stepmother, sister and brother-in-law’s hesitancy about another Trump presidency.

“He’s going to be out there campaigning for his dad,” said the person. CNN reached out to a spokesperson for Donald Trump Jr. and did not receive a response.

Don Jr. is right now the closest family adviser Trump has. Unlike his presidential years, when Ivanka and Jared were the inner circle, Don Jr. has emerged as a key figure in the future of Trumpian politics. But that’s not to say Don Jr. wants to fill the shoes of Jared and Ivanka.

“He does not want the Jared, behind-the-scenes role,” says the source, adding Don Jr. isn’t into the micromanagement of Trump. “When (Don Jr.) has strong opinions about something involving his father, he does not have a problem saying them out loud,” says the person, giving as an example Don Jr.’s insistence Trump not announce his candidacy before the midterm elections. “He just didn’t think it made sense.”

Opinions and appearances will be Don Jr.’s sweet spot should his dad run again, but the eldest Trump son will draw the line at a defined job description.

“He’s not going to be the shadow campaign manager or anything,” says the source, who adds Don Jr. is also focused on his five children, his publishing company, and “hunting.”

Eric Trump, and likely more so his wife, Lara Trump, a frequent guest on conservative news outlets, will fall more under the Don Jr. level of participation in a Trump second act, than that of Ivanka and Jared.

Most of the people who spoke to CNN say family division over the political plans of their patriarch is not a concern – Tiffany Trump won’t be switching up seating arrangements to keep the pro-campaign faction away from the anti-campaign. Mar-a-Lago, closed for the storm until Friday at 6 p.m., will be back in full swing in time for Tiffany Trump’s marriage to Boulos, son of a wealthy businessman who owns several companies in Nigeria.

The wedding will not be a place for squabbles and power plays. “It’s going to be a day that is all about Tiffany,” says a person familiar with the event, rumored to be a $1 million affair.

“They get along great,” says one of the people who spend time with the siblings, adding politics and their dad are not always what they talk about when they get together. “Believe it or not, they’re a pretty normal family.”