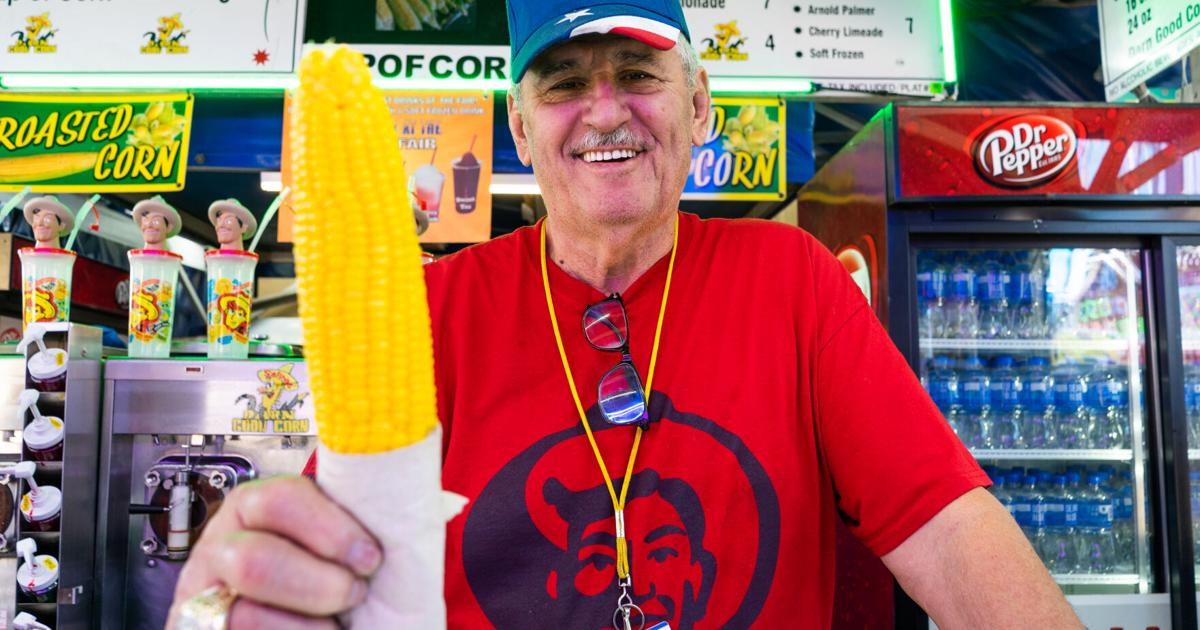 The bustling crowds, the churning Texas Star Ferris wheel and Big Tex’s toothy grin are some of the first things guests may notice when walking through the State Fair of Texas main gates. The carnies clamoring down the Midway, the auto booths sporting the latest truck models on towering platforms and the slew of daily events are enough to keep guests busy until they leave.

But with the first breeze, the smell of Fair Park’s fried flavors wafts through the air, inviting fairgoers to take a break and make a plate full of fair classics. Corn dogs, giant turkey legs, roasted corn and funnel cakes have become iconic foods with a rich history that create the State Fair experience.

There is perhaps no better way to whet the appetite and kick off mealtime state-fair style than by grabbing a corn dog from Fletcher’s Original Corny Dogs in Big Tex Circle.

Past the herds of camera-wielding Big Tex lovers, a gold and red food stand is nestled in a corner with savory-sweet plumes rising from its kitchen as a line of hungry customers says, “There that’s Fletcher’s.”

These corn dogs are dipped fresh into Fletcher’s signature cornmeal batter and fried until golden brown. Patrons can choose from classic corn dogs to turkey dogs to the jalapeño and cheese dog and other options like the 2021 invention, the Dallas Hot Bird Dog, a smoked turkey frank dipped in spicy batter, deep fried then loaded with mac and cheese and topped with Cholula hot sauce and fried jalapeños.

The stand has been selling corn dogs at the fair for 80 years and experimenting with more flavors and varieties, said Audrey Gardsbane, Fletcher’s assistant manager and great-granddaughter of founder Neil Fletcher Sr.

Originally a vaudeville performer, Neil Fletcher Sr. co-invented the corny dog with his brother Carl after they were offered to rent a booth at the State Fair of Texas in 1938, according to the Texas State Historical Association.

He often said he discovered his inspiration for the snack after seeing a man sell hot dogs covered in cornmeal on Oak Lawn in Dallas, Texas. The man used a cornmeal mold that took 25 minutes to cook the hot dogs, but Carl Fletcher had the idea to put the whole thing on a stick and fry it in hot grease, Neil Fletcher Sr. told The Dallas Morning News in 1978.

Once they came up with the right recipe, the brothers took another 12 years to perfect the batter, and it hasn’t changed since.

After opening in 1942, the Big Tex Circle location has been one of the top-producing food stands at the fair, Gardsbane said. Fletchers’ Original Corny Dogs sells over 500,000 original-flavored corn dogs in the fair’s 24-day operation.

Gardsbane first learned to stick a hot dog around age 5 or 6, she said. By 15, she was already working at Fletcher’s main stand, where she has worked every weekend. This year, however, she is taking shifts during the week.

“It’s my family’s business, and I love it. I love the legacy, and I just think it’s amazing to be a part of,” she said.

Amber Fletcher, current Fletcher’s co-owner and Neil Fletcher Sr.’s granddaughter, said that growing up in Fair Park was about the most fun a kid could have.

“To be a part of someone’s story that much, I don’t know how anything can get any better than that.”

Back in the ’80s, while her parents would also pay for her fair rides in the ultimate playground, Amber Fletcher said she would come up to the operators and ask to trade corn dogs for them as well. She also watched how her family interacted with customers and treated them like family —  an atmosphere she strives to maintain. Part of working at the State Fair is getting to be a part of people’s happy memories, she said.

Amber Fletcher said she once met a woman who would go to the fair every year and eat corny dogs on the same bench with her father. After his death, she has returned to the same bench every year to eat a corn dog and think about him.

“To be a part of someone’s story that much, I don’t know how anything can get any better than that,” she said.

While hot dogs and warm smiles are enough to satisfy, no fair meal is complete without some plump protein.

Around the backside of Big Tex toward the Midway and through a long mall of carnies and carnival games sits Turkey Legs by Dickel, the original giant turkey leg stand at the State Fair of Texas, in the Cotton Bowl Plaza.

Walter Dickel began selling turkey legs at the State Fair around the late ’70s and was the only vendor selling them at that time, said Tino Sosa, who purchased the business from Dickel in 1996.

Dickel found a distributor who smoked and spiced the turkey legs to perfection, Sosa said. Over the years, the business has grown from just one oven to now sporting eight, allowing the turkey slingers to sell about 52,000 legs over the course of the fair.

Today, Sosa continues to use the same family-owned distributor Dickel found, selling legs averaging between 32 and 34 ounces each — almost two pounds of meat. The size along with the smoking and spicing process set them apart from other turkey legs, he said. The stand also uses steam in its warmers to ensure the turkey stays fresh and succulent.

Sosa said he gets a kick from watching customers gnaw on turkey legs as big as their head in what he calls “Fred Flintstone style.”

But beyond the laughs, selling turkey legs has provided him the opportunity to form friendships and make memories.

About 10 years ago, a woman asked Sosa if she could buy a whole case of turkey legs and whether she could call throughout the year for more because she liked them so much, he said.

This blossomed into a friendship, he said. She returns every year to buy her annual case and calls around Thanksgiving and other holidays to get turkey legs for her family.

“I would have never met her unless it was for the turkey legs,” he said.

With the turkey leg down, it’s time to add another State Fair classic to the menu — roasted corn on the cob.

Heading through the Midway, past the whirling games and the prizes drooping from the kiosk awnings, reveals Darn Good Corn across from the haunted house.

Amid floating tufts of cotton candy from next door, ears of corn are handed over the counter almost as fast as they are ordered. If the owner Andy Salinas is there, one of those hands may be sporting a Dallas Cowboys Super Bowl ring as glossy as the buttery corn.

Although roasted corn, cups of corn and beverages are the only menu items, the specialty stand doesn’t skimp on the seasonings offered.

The stand sells about 40,000 ears during the fair, with a third of the sales occurring in the last six days, he said.

While this is certainly challenging, Salinas is no stranger to the business. He opened Darn Good Corn in 1997 after over two decades working in the concession business for the Cowboys and Louisiana State University, he said.

“Working at the fair is one of the best experiences. I don’t see it as just getting a check. I see it as excitement, entertainment. You meet so many people, so you build a family connection at the fair, so I enjoy it. I’ll come back every year.”

He spent 17 years under the previous Cowboys owner before switching to LSU, but then returned to work for the Cowboys when Jerry Jones took over as the owner, he said. During that time, Jones gave the entire staff Super Bowl rings, including Salinas.

Selling corn at the fair usually keeps Salinas and his crew there past midnight, he said. But luckily, the staff stays with other vendors and ride operators in a recreational vehicle lot provided by the fair.

“It’s like a little community within the fair,” he said.

And it’s the community, the customers and the camaraderie that keep Salinas coming back, he said.

Corn dogs, two-pound turkey legs and roasted buttered corn are enough to fill most bellies, but it’s no State Fair meal without dessert.

Leave the Midway opposite the Ferris wheel through the big red arch toward the Coliseum Arena to find Granny’s — a younger establishment known for its red velvet and strawberry shortcake funnel cakes.

Granny’s has been treating State Fair guests to their classic funnel cakes for over 15 years, assistant manager Amber Mcelhanon said.

The crew starts prepping the deep fryer at 8 a.m. each morning and sells over 500 funnel cakes a day, Mcelhanon said.

Whether ordering the classic powdered sugar or the strawberry shortcake funnel cake, which adds cream cheese, strawberries and whipped cream, all are messy finger foods that fit with fun fair vibes.

Despite it being only her second year working at the fair, Mcelhanon said she enjoys the feeling of making someone’s day and is already noticing regular faces.

“Working at the fair is one of the best experiences,” she said. “I don’t see it as just getting a check. I see it as excitement, entertainment. You meet so many people, so you build a family connection at the fair, so I enjoy it. I’ll come back every year.”

With the last crisp sugary bite, the journey to make a plate full of classic State Fair foods is at an end. Feel free to go back for seconds, check out the rest of the fair or call it a day. Either way, the experiences at the State Fair of Texas are sure to make fond memories and connections that last as long as the fair itself.

“This is the most amazing, magical Texas experience anyone could ever have,” Fletcher said.