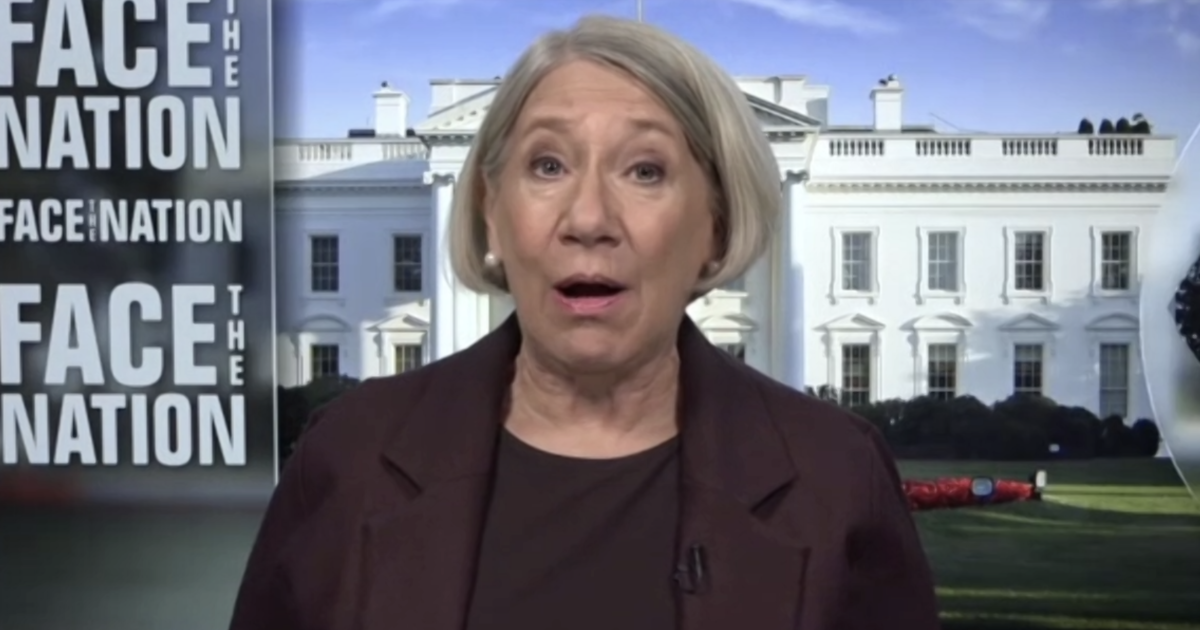 The following is a transcript of an interview with Anita Dunn, a senior adviser to President Biden, that aired Sunday, Nov. 13, 2022, on “Face the Nation.”

MARGARET BRENNAN: Welcome back to Face the Nation. We turn now to Anita Dunn. She’s a senior adviser to President Biden and she joins us this morning from Chevy Chase, Maryland. Good morning to you. I assume it was a late night for you, given that Democrats have defied expectations. You still will have only a thin majority in the Senate. Republicans still have a shot at gaining the House. What becomes possible now?

SENIOR ADVISER TO THE PRESIDENT ANITA DUNN: Well, good morning and thank you for having me on this morning. I think it was a late night for everybody. It’s been a bunch of late nights since Tuesday. You know, the president and the Democrats accomplished a huge amount with a 50/50 Senate, and an extremely narrow House majority in the first two years of President Biden’s term. If you take a step back, four hugely consequential pieces of economic legislation, the rescue plan, the Bipartisan Infrastructure Law, the CHIPS and Science Act and the Inflation Reduction Act, which really are having an effect now and starting to have even more of an effect next year and the year after. Also, bipartisan gun safety legislation, bipartisan legislation to help veterans who have returned from Iraq and Afghanistan and their families. So, you know, the president’s been clear as he was in his press conference this week, MARGARET, which is he’s going to reach out his hand to work with the Republicans. And the question is whether they will reach out their hand to his. But given these narrow majorities, you know, obviously the Senate, we Democrats will control, the House is still up in the air. Voters in this country are going to expect their leaders to work together.

MARGARET BRENNAN: Otherwise, is the most you can do, just get judicial and cabinet appointees confirmed?

DUNN: Well, you know, the president likes to say he’s an optimist and he is an optimist. He he believes that at the end of the day, there are going to be things that Republicans and Democrats can work on together as they did over the last two years. But, yes, control of the Senate is hugely consequential, both for judiciary nominations and appointments. The most diverse group of judicial nominations ever, under the first two years of President Biden, but also for controlling the agenda in the United States Senate. And that means continued progress for the working families, middle class of this country.

MARGARET BRENNAN: The president has said he wants to take it slow in terms of defining priorities over the next few weeks in this lame duck session. What’s the business you need to get done?

DUNN: Well, MARGARET, as you know, we have to keep the government open and funded. That is obviously priority number one then, and it’s going to take a little while still for lame duck priorities to really be set. Given the uncertainty about the outcomes of the election still. You know, last Sunday when you were sitting in your chair and you had guests on, I don’t think anybody would have predicted that we would still not know who would control the United States House of Representatives the following Sunday. But other lame duck priorities will certainly include additional funding for Ukraine, which has been and the president has said he hopes will continue to be a bipartisan issue in the United States Congress. You know, obviously, emergency funding for the natural disasters that Florida and Puerto Rico suffered earlier this year and additional priorities for the administration as well. But keep the government open and running is the number one priority.

MARGARET BRENNAN: It looks like Democrats owe a big part of their better than expected performance to young voters who turned out. About 26 million Americans are now stuck in limbo because they’d been promised student debt relief. Now it’s caught up in the courts. If you lose in court, I know you’re waiting for that, will this just be a broken promise?

DUNN: So, MARGARET, we believe we’re going to prevail in court because the arguments that and the law are on the administration’s side. And make no mistake about it, the admin– you know, President Biden made this commitment to people in America. It’s not just young people. It’s also people of every age. We’ve gotten letters at the White House from people who have retired, who are talking about what a difference loan forgiveness is going to make.

MARGARET BRENNAN: But is there a plan B if the court strikes it down?

DUNN: We believe we’re going to prevail in court. And at that point, we will swiftly move to make sure that the over 26 million people at this point who have — whose information this administration has — that we’ll move swiftly for loan forgiveness.

MARGARET BRENNAN: Voters in key states like Pennsylvania rated abortion access as a top concern for them. But if Republicans take the House, what is it that the president can actually do here? And is there room for compromise on restrictions with some of the Republicans who’ve said they’re open to securing abortion access?

DUNN: So, the president has been very clear. He believes Congress needs to codify Roe versus Wade so that it is the national law of the land. And we do not have states that have, in effect, prohibited abortion totally. And at this point, there are significant number of states that have no — everything short of outright prohibitions on abortion. So the president’s been very clear what Congress needs to do. And he has said if Democrats control the House and the Senate, that he will send a bill to codify this nationally. He will continue to work, as our administration has since this ruling came down, to make sure that the travel of women who want to go to states where abortion is legal is not impeded, that people are able to get reproductive health care, that women who have other medical issues aren’t denied care, which is happening, MARGARET, and at the end of the day, you know, the president said when this ruling came down, it was going to be a political issue, that voters needed to go to the polls and make their voices heard. And there’s a huge amount of evidence that’s exactly what happened. So, the real question is whether the Republicans will listen to those voices.

MARGARET BRENNAN: Well, we’ll see if there’s any compromise there. And what happens if the Republicans do get this slim majority? It ups the chances of all of these investigations that Kevin McCarthy has promised are coming. Would you say today that the White House will comply with them? The Trump administration was heavily criticized for defying Congress’s requests for appearances and documents. Will the Biden White House comply?

DUNN: You know, MARGARET, many of the Republicans who have been talking about these investigations and even potential impeachment have made no secret of the fact that they have a political agenda that they are trying to advance through these. Obviously, the White House has and will continue to play with fair and legitimate oversight because we are a White House that respects norms and the rule of law. But I think that, you know, the American people didn’t vote for Congress being used to conduct political vendettas over the next two years. They voted for working together to make progress on the issues they care about. The president is going to be focused on the priorities of the American people. And we would hope that the Republicans who’ve just suffered a substantial defeat in terms of both their expectations and what historically midterm elections tend to do, would also listen to the American people, focus on the priorities of the American people.

MARGARET BRENNAN: You said that keeping the government open and funded is an immediate priority. Does that mean the White House would like Democrats in Congress now to just lift the debt limit through 2024?

MARGARET BRENNAN: I know we’re still counting votes from this election, but as you know, former President Trump plans to announce he’s running in 2024 this Tuesday. You’ve already been involved, as you said, just being prudent, in planning for President Biden to also run. Does the Trump announcement change any part of your planning or calculus?

DUNN: You know, the president has made it clear he intends to run and that he will make a formal decision later this year or early next year. You don’t run for president because of what the other side is doing or what another candidate may be doing. The president will run because he feels that he is the best person to continue the progress that we have made in this country. Building an economy from the bottom up and the middle out. Restoring America’s role in the world as a world leader. Building the coalition against Russia’s aggression in the Ukraine and supporting Ukraine. You know, concentrating on addressing climate change, the historic threat to our planet and to our future. The president intends to run, and if he runs, he will be running because of what he has gotten done and what we still can get done as a nation together. Not because of any candidate on the other side.

MARGARET BRENNAN: We’ll be watching and listening. Anita Dunn, thank you for your time this morning. We’ll be right back.