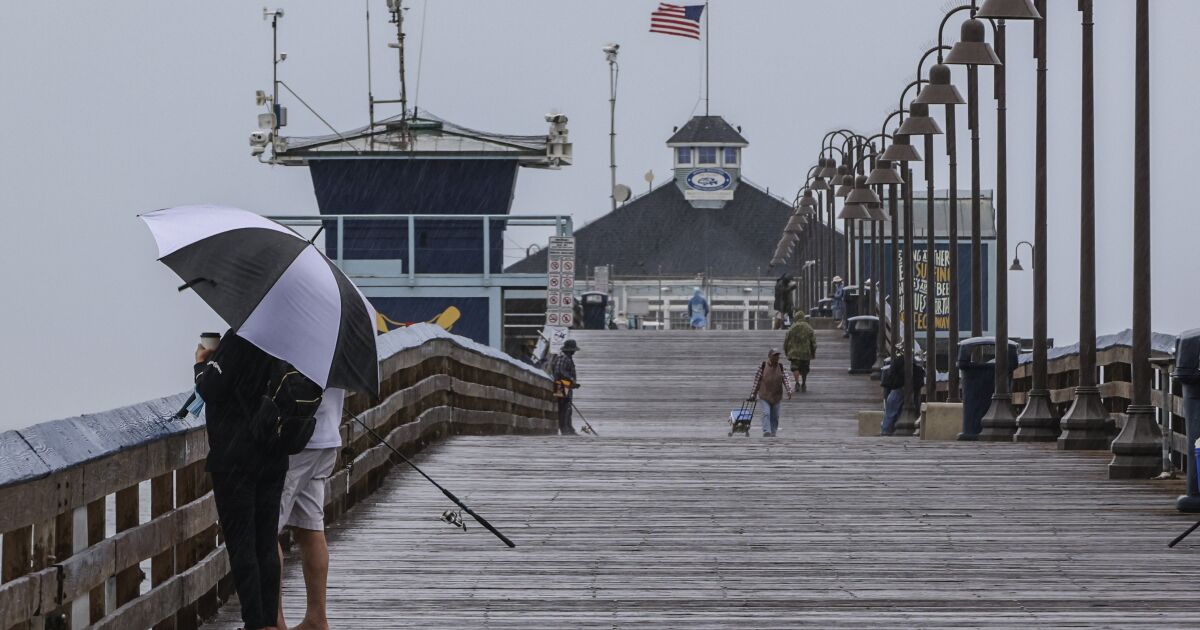 The storm system was expected to continue affecting Southern California through the weekend, but with less rain and somewhat cooler temperatures compared with Friday. It caused scattered power outages across the region.

Kay was about 130 miles off the coast of San Diego on Friday evening, and meteorologists were surprised the storm had maintained so much of its strength as it moved into the chilly waters near California.

Usually, as tropical storms make their way north, they lose a lot of their punch, said Ivory Small, a meteorologist with the National Weather Service in San Diego.

Though Kay as a whole has steadily weakened, the storm produced strong gusts in Southern California.

Its maximum sustained wind speeds had fallen to 40 mph, according to a 5 p.m. update by the National Hurricane Center. It will degrade into a post-tropical cyclone once its wind speeds fall below 39 mph.

“Tropical-storm-force winds extend outward up to 90 miles mainly to the east of the center,” according to the Hurricane Center. “There are continued reports of 50-70 mph wind gusts in the mountains east and northeast of San Diego, with occasional gusts to hurricane force.”

Forecasters also said Kay was producing 2 to 4 inches of rain in the southernmost areas of California, with some isolated pockets of 6 to 8 inches of precipitation.

Rain was scattered across San Diego County in the morning and crept into Riverside, Orange and San Bernardino counties by the afternoon, the weather service said. Heavy rains with possible thunderstorms could still be ahead, officials warned.

San Diego County was walloped with heavy rain and wind gusts over 100 mph in the mountain areas. The National Weather Service issued a flash flood warning for the northeastern part of the county as well as Riverside County.

By Friday evening, some of the San Diego area mountains had received close to 5 inches of rain, with San Diego International Airport receiving 0.60 inch as of 7 p.m.

The threat of foul weather led singer Alicia Keys to postpone her sold-out Friday night concert at San Diego State University, but the Dodgers and Padres faced off as scheduled at Petco Park.

Orange County beaches had received about a quarter-inch of rain by Friday evening, and a predicted multi-inch deluge in the Riverside County mountains failed to materialize.

Shane Reichardt, a spokesperson for the Riverside County’s Emergency Management Department, said the storm escalated the potential for a public safety power shutoff. It also repositioned threats from fires to include flash flooding.

“When you look at everything that we have, with the heat we’ve had, the power concerns we’ve had, the storm, the potential for public safety shutoffs, that creates a lot of anxiety. It is a lot for the community to keep taking in,” Reichardt said.

The low desert areas, including the Coachella Valley, were also vulnerable. A flash flood watch is in effect for all Southern California mountains, valleys and deserts, meteorologists said. Parts of the desert, including Mount Laguna, Ocotillo and areas near the Imperial Valley were under a flash flood warning.

Intense winds stressed power lines and toppled trees in San Diego County, where the top wind speed was clocked at 109 mph at Cuyamaca Peak, about nine miles south of Julian.

A high-wind warning is in effect until midnight throughout the Inland Empire, the mountains of Riverside and San Diego counties and the San Diego coast and valleys. Orange County and the San Bernardino mountains and deserts were under a wind advisory. Even coastal and valley areas had the possibility of up to 60 mph winds.

A gale warning was in effect for coastal waters, with seas as a high as 12 feet. Orange County surf conditions could reach six feet. Strong currents are expected through at least Sunday.

In anticipation of the swells and high tides, Long Beach began offering sandbags for residents in low-lying areas at fire stations and the lifeguard station at 72nd Place and Ocean Boulevard.

Protective berms have been constructed along the oceanfront peninsula near Alamitos Beach to protect nearby homes.

“Residents are advised to stay away from the coast from 7 p.m. to 7 a.m., starting tonight,” Long Beach officials said in a release.

In National City, Courtney Jones has been tracking Kay on her phone. She grew up with storms on the East Coast.

“I was kind of expecting to wake up and look outside and see the trees bending and leaves everywhere, loose debris, but when I looked out, all I saw was puddles and people driving a little more slowly,” said Jones, 28. She was hoping the rain would alleviate the heat, but the conditions were still unbearable early Friday, what she and her family call “dog breath weather”: hot, muggy and sticky.

Daye Salani zipped out of his house in downtown San Diego without his umbrella and jacket when he left for work Friday morning.

“If I leave work and it is pouring, I don’t mind getting soaked,” said Salani, adding that it’s “been a minute” since rain has bucketed down on him. This was a rare occasion and “I’m inviting it,” he said.

Heather Leer, who lives in Hemet, near the Fairview fire, was on a layover at the Denver airport, hoping not to encounter any weather-related disruptions so she could get back to her house, which is inside the fire’s evacuation zone.

Leer’s husband, who remained at their home, had not reported any rain Friday morning, but she was worried about the winds aggravating the fire and challenging containment efforts. The blaze, which broke out Monday, had exploded to nearly 30,000 acres. The rains also could lead to flash floods and mudslides in the burn scar.

“It is a huge concern,” said Leer, 41. “We have never seen so many things, one on top of each other, happening that could potentially change our lives forever.”

In Imperial, Jorge Reyes said the rain started early Friday. It’s humid, he said, but it doesn’t feel anywhere as hot as the triple digits the city registered over Labor Day weekend.

Flash flood warnings have been issued during past monsoon seasons, but he said this is the first time he can recall one for September — or really any rain at all during this month in a calendar year.

“We don’t get rain all the time, and sometimes when there is rain, it goes around us in Yuma area or other cities,” said Reyes, 45.

The storm is not expected to bring significant rain to Los Angeles County and the surrounding areas, which are likely to stay dry most of Friday, although some rain bursts and thunderstorms could develop by the evening and last through the weekend.

Still, Los Angeles International Airport announced on Twitter that because of Friday’s wind conditions, it would shift operations to have aircraft depart from the east and arrive from the west. There were few delays, with “99% of our schedule on time so far today,” LAX said.

Meteorologists have issued a flash flood watch for L.A. and Ventura counties, as well as the Antelope Valley. Forecasters are particularly concerned about Catalina Island, which is under a coastal flooding advisory.

Despite the coming rain, excessive heat remained an issue Friday amid a prolonged heat wave that has baked Southern California for more than a week. The temperature in downtown Los Angeles was at 80 degrees by 9 a.m., said Dave Bruno with the weather service’s Oxnard bureau. Most valley and foothill areas did not drop below 90 overnight.

Temperatures began to drop by noon, but not before setting another daily record at LAX, which recorded a high of 101 degrees, breaking the previous Sept. 9 record of 96 degrees set in 1984.

Times staff writer Gregory Yee, and Gary Robbins and Teri Figueroa of the San Diego Union-Tribune contributed to this report.