Trump, Biden and Obama Campaign in Pennsylvania in Midterm Finale 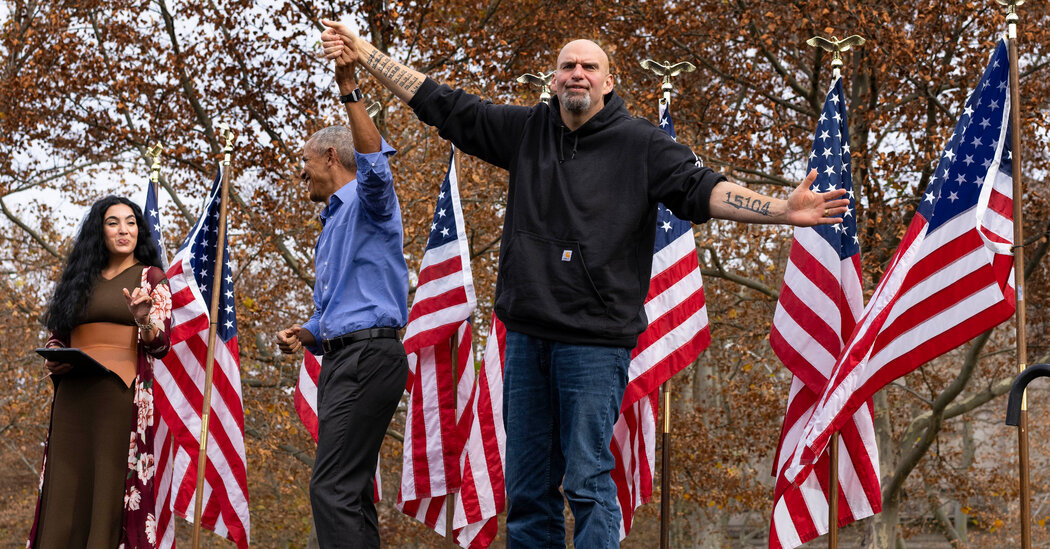 PHILADELPHIA — The two parties’ strongest messengers — a fraternity of recent presidents — descended on the pivotal swing state of Pennsylvania on Saturday to open the last weekend of this year’s midterms, rallying their voters in a proxy battle that could define both parties well beyond the election.

The moment represented both a clash from the past and a fight over the future. While the issues are distinctly 2022 — crime, high inflation and the unraveling of federal abortion rights — voters are again being asked to choose between the establishment politics of President Biden and former President Barack Obama, and the chaotic, disruptive force of former President Donald J. Trump.

To press their case, Mr. Biden and Mr. Obama reunited in a familiar city, sharing a stage in Philadelphia — an event that brought back echoes of the enormous 2016 rally at Independence Mall, where the party’s top leaders joined Bruce Springsteen and Madonna to try to push Hillary Clinton over the finish line. The stage at a Temple University gymnasium on Saturday evening was a lot smaller — and the rally was a lot less well-attended than the 2016 event.

Mrs. Clinton, of course, fell short in Pennsylvania against Mr. Trump, who held three rallies in the state in the final four days of the 2016 race. This year, Mr. Trump closed the last weekend of midterm campaigning with an event in the Pittsburgh exurbs, where he drew thousands of Republicans to the Arnold Palmer Regional Airport tarmac in Latrobe.

In Philadelphia, Lt. Gov. John Fetterman, the Democratic nominee for Senate, said he was proud to share a stage with a former president and current president who are “sedition-free” — a reference to the plans by his Republican opponent, Mehmet Oz, to appear with Mr. Trump at the evening rally.

In his remarks in Philadelphia and earlier in the morning in Pittsburgh, Mr. Obama cast his party as defending the bedrock values of the nation and Mr. Trump as the biggest threat to American democracy.

“Donald Trump says he needs Dr. Oz in the Senate in case there’s a close election again,” Mr. Obama said, in Pittsburgh on Saturday morning, a stop the president skipped. “Think about that. He’s basically saying, look, if I lose again, I need him to see if he can put his thumbs on the scale. That is not what this country is supposed to be about.”

Later in Philadelphia, Mr. Obama urged a stadium of supporters to head to the polls. “Vote for leaders who are going to fight for that big, inclusive, hopeful, forward-looking America that we believe in,” he said. “It is in your hands.”

In perhaps a sign of awareness of Mr. Biden’s political standing, the president opened the Philadelphia rally rather than taking the closing slot typically reserved for the president — that spot belonged to Mr. Obama.

As Mr. Obama, Mr. Biden and Mr. Trump storm through the Keystone State, Republican candidates across the country are pressing their advantage in House races and trying to pick off the one Senate seat that would flip control of the chamber. Democrats, who have struggled to overcome history and a sluggish economy, are defending their records and arguing that their opponents would pursue an extreme agenda on issues like abortion, voting rights and benefits including Social Security and Medicare.

The ability of Democrats to stave off deep defeats in Congress and statehouses will depend on whether they can reanimate the coalition of college-educated suburbanites, Black voters, young voters and a small slice of moderates who propelled Mr. Biden to the White House. Together, those voters lifted Democrats into power throughout the Trump era, heading to the polls in record numbers to send a message that they rejected the divisive language and inflammatory style of his administration.

For Republicans, the question is whether Mr. Trump’s army of devoted voters comes out to support candidates who have modeled themselves in his image — even when he is not on the ticket.

So far, turnout has kept pace with the record levels of 2018, the first midterm election after Mr. Trump took over the nation’s political consciousness. But strategists on both sides acknowledge that the extraordinary circumstances of this year’s elections, the first since the pandemic began to wane, leave them unsure about who, exactly, will vote.

“We know that for better or worse, ever since Trump came into the scene in 2016, voters are supercharged,” said Molly Murphy, a Democratic pollster and strategist and the president of Impact Research. “But how much of the Trump core shows up is an open question.”

Pennsylvania has emerged as a central focus of both parties, with a narrow Senate race between Mr. Fetterman and Dr. Oz that could decide control of the chamber. In the House, where Republicans need to flip just five seats nationwide to gain power, the party could flip three from Democrats in Pennsylvania alone. And in 2024, Pennsylvania is likely to reprise its crucial role in determining presidential elections.

The state, where television viewers have been targeted with $115 million in political advertising over the past month, captures some of the country’s main tensions, with college-educated liberals concentrated in urban and suburban areas squaring off against blue-collar workers with shifting party loyalties. With their events in the state’s two biggest cities, Mr. Biden and Mr. Obama will potentially reach nearly a quarter of Pennsylvania’s active Democratic voters.

“Inside the confines of the commonwealth, you can find every political tribe in America represented in a big way,” said David Urban, a Republican strategist and a veteran of Pennsylvania politics.

The state has about 420,000 Republicans — about as many as in Arizona, Georgia and Nevada combined — who voted for the first time in 2016, did not cast a ballot in 2018, and then showed up to the polls again in 2020, according to Republican National Committee data. Only about 6 percent of those Pennsylvanians have cast ballots so far this year.

But the R.N.C. data shows that 98 percent of those voters preferred to vote on Election Day, underscoring the importance — and the inherent risk — of Republicans’ increased reliance on the final day of voting.

The two parties have deployed the presidents carefully. Mr. Biden has largely kept his travel to safe races and bluer areas, avoiding some of the most competitive states, like Arizona, Georgia and Ohio. Both publicly and privately, Democratic candidates and strategists have questioned the wisdom of having him campaign in their states, given his low approval ratings.

While some party strategists worried that his appearance in Philadelphia could hurt Mr. Fetterman, Mr. Biden has always had a special relationship with the state of his birth. As a senator from Delaware, he was sometimes called the “third senator from Pennsylvania,” and he based his presidential headquarters in Philadelphia. In a recent New York Times/Siena College poll, Mr. Biden’s approval in the state matched his national average — 42 percent — and was notably higher than his position in the other three battlegrounds surveyed.

And Democrats hope that the pairing with Mr. Obama — one of the party’s most effective communicators — could overcome any drag on the ticket from Mr. Biden.

In his appearances, Mr. Biden has tried to rally audiences around his policies, highlighting accomplishments like his forgiveness of student loan debt and a reduction in the cost of hearing aids, and has warned that Republicans could endanger Social Security and Medicare. Yet at times, his delivery has been stumbling, and his remarks have included some misstatements and falsehoods.

He has tried to persuade a skeptical public that the economy is doing better than it may feel at the grocery store or the gas pump. A recent survey by CNN indicated that three-quarters of likely voters believed the economy was in recession, even though it grew last quarter.

“The American people are beginning to see the benefits of an economy that works for them,” Mr. Biden said Thursday in New Mexico as he stumped for Democrats, while conceding that “a lot of Americans are still in trouble.”

Some Democrats say that message has made the party’s political climb even harder. Stanley B. Greenberg, a veteran Democratic pollster, said the party’s candidates, unlike the White House, had largely focused on concerns over higher prices — the primary worry for many voters.

“The biggest problem is, the White House has tried to make the case that this is a good economy,” Mr. Greenberg said.

Mr. Obama is far more in demand, a role reversal from the midterm races in 2010 and 2014, when, as president, he was unpopular and struggling to sell the Affordable Care Act to a skeptical public. In those years, Mr. Biden was the Democratic crowd-pleaser, particularly in white, working-class districts where Mr. Obama had trouble winning support.

Mr. Trump, for his part, has invested a huge amount of political capital in Pennsylvania this year.

He personally pushed for Dr. Oz to run for Senate, which ignited a nasty, three-way primary. If Dr. Oz loses on Tuesday, it would raise further questions about Mr. Trump’s ability to win the state in 2024 after he lost it in 2020.

The former president’s closing message this year has focused on his portrayal of an America in decline, with Democrats as the leading cause.

“We have to basically, in a nutshell, save our country,” Mr. Trump said Wednesday in Iowa.

In Pennsylvania, Mr. Trump’s super PAC, MAGA Inc., has targeted voters in the final days of the race with short digital ads, sent via text and web-embedded digital ads, that feature clips of Dr. Oz and Mr. Trump together at rallies in the state, according to videos reviewed by The New York Times.

The super PAC has sent similar videos of Trump-endorsed candidates to voters in Arizona, Ohio, Michigan and Nevada.

For Mr. Trump and Mr. Biden, the stakes could extend well beyond this year’s fight for control of Congress.

Mr. Trump has relentlessly teased supporters about a third White House campaign, and is expected to formally announce another bid soon after the midterms.

Mr. Biden has suggested that he would be more likely to run if Mr. Trump enters the race, with people close to the president saying they believe he is the Democrat best positioned to defeat his former opponent. Still, Mr. Biden, who will turn 80 this month, has shown signs of political weakness, even among his base.

But whether significant midterm losses for Democrats would weaken Mr. Biden’s argument for a re-election bid remains an open question. Celinda Lake, a Democratic pollster and a longtime ally of the president, said the midterm outcome would not affect his decision.

“He is running,” she said. “Did Obama not run? Did George Bush Sr. not run? No. They all run. They all have bad first midterms, and they all run.”