Trump Reacts to Pending Jan. 6 Subpoena in a 14-Page Letter 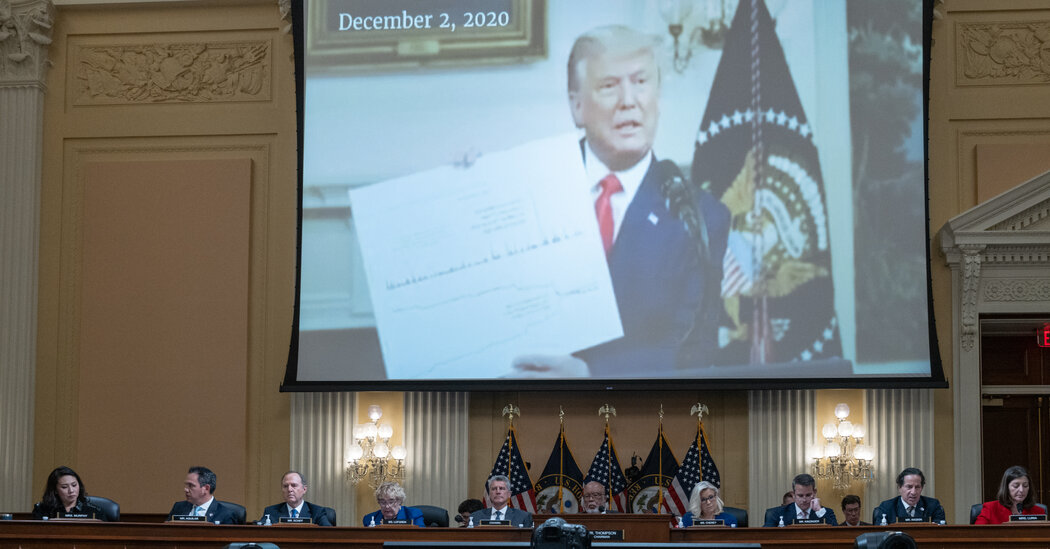 WASHINGTON — Former President Donald J. Trump responded on Friday to a promised subpoena from the House committee investigating the Jan. 6 assault with a lengthy, rambling letter that attacked the panel’s work, reiterated false claims of widespread voting fraud and presaged a potentially bruising battle over whether he could be compelled to testify about his role in the riot and his efforts to subvert the 2020 election.

In a 14-page missive that did not address whether he would comply with the subpoena, Mr. Trump perpetuated the same lies that had fueled the attack and boasted about the size of the crowd that had amassed to hear him speak before marching to the Capitol and staging a violent siege.

The former president has indicated privately to aides that he would be willing to testify to the House panel but would like to do so live, according to a person close to him, a prospect that would prevent video of him from being clipped or edited in a manner he dislikes. The letter he released on Friday — a conspiracy theory-filled rehash of his many grievances and false assertions — underscored the risks for the committee of giving Mr. Trump an unfettered public platform.

“The presidential election of 2020 was rigged and stolen!” the letter began in all capital letters.

Mr. Trump dedicated page after page to repeating that lie about the 2020 election, which he lost to President Biden, a fact he has repeatedly refused to acknowledge.

“You have not gone after the people that created the fraud, but rather great American patriots who questioned it, as is their constitutional right,” Mr. Trump wrote in the screed. “These people have had their lives ruined as your committee sits back and basks in the glow.”

Instead of providing what he claimed was evidence, he included appendices filled with assertions of widespread election irregularities that have been debunked, some by his own former attorney general, William P. Barr, and other top Justice Department officials.

“A large percentage of American citizens, including almost the entire Republican Party, feel that the election was rigged and stolen,” Mr. Trump wrote, without mentioning that his false claims were the reason the lies spread among the populace and have come to define the G.O.P.

He included aerial photographs purporting to show enormous throngs of people on the National Mall on Jan. 6, 2021 — reminiscent of the images that the White House released after his inauguration in 2017 — and again complained of what he claimed was media censorship that downplayed the size of the crowd.

The letter emerged as the House committee, which had voted unanimously on Thursday to issue a subpoena to Mr. Trump, was at work preparing the demand, which would list specific documents that the former president must turn over and a date by when he must testify. People close to the committee’s work said the panel was poised to issue the subpoena as soon as Monday.

While Mr. Trump was unlikely to comply with the subpoena — he previously refused to testify in his impeachment trial — committee and staff members were discussing whether they would accept him testifying live. Those familiar with the discussions said the committee seemed open to the idea, believing the panel could most likely elicit some significant developments from Mr. Trump’s testimony.

Should Mr. Trump decline to appear, it could lead to a precedent-setting fight. Several former presidents voluntarily testified before Congress, but there is no Supreme Court precedent that says whether Congress has the power to compel a former president to testify about his actions in office.

Committee members said they believed Mr. Trump should want to comply with the subpoena.

“I want to believe again that every American citizen who knows something about these events would come forward to testify, and nobody knows more about them than Donald Trump does,” said Representative Jamie Raskin, Democrat of Maryland and a member of the committee.

Representative Bennie Thompson, Democrat of Mississippi and the chairman of the committee, told reporters on Thursday that he hoped Mr. Trump would comply but that he believed the panel had compiled a comprehensive case of the events of Jan. 6 without the former president’s testimony.

“If we get his attention, fine,” Mr. Thompson said. “If not, we’ll go with the evidence we collected.”

Mr. Trump’s explosive reaction came the day after a hearing in which the Jan. 6 panel summed up its case against the former president, and presented remarkable behind-the-scenes video that showed top congressional leaders scrambling to secure the Capitol during the attack.

In another portion of the video released on Friday to CNN, Speaker Nancy Pelosi can be seen talking by cellphone to Vice President Mike Pence, asking about his well-being and advising him, “Don’t let anybody know where you are.” The moment underscored the danger Mr. Pence faced as the rioters called for his execution and Mr. Trump insulted him on Twitter.

Mr. Trump never attempted to check on Mr. Pence, who had been evacuated from the Capitol just minutes before the mob flooded the area where he had been. But in a separate phone call sometime that afternoon, Mr. Pence’s chief of staff, Marc Short, reached Mark Meadows, the White House chief of staff, to say that he and the vice president were safe, according to a person briefed on the exchange.

During the call, Mr. Short said that they believed the counting of electoral votes should resume that night and Mr. Meadows agreed, the person said. But when Mr. Meadows asked where the vice president was, Mr. Short declined to provide specifics, saying only that they were around the Capitol.