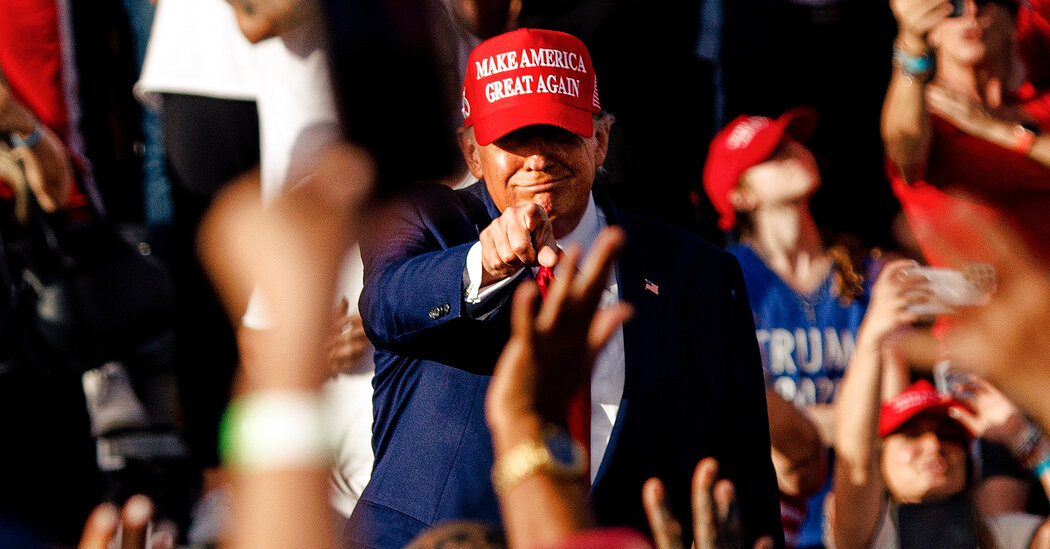 There will be no golden escalator this time, but neither will there be mocking guffaws or can-you-believe-this eye-rolling. As Donald Trump is expected to kick off another presidential campaign tonight, the world has changed rather drastically since his first. Whatever else is thought of his attempted comeback, it will not be dismissed as an implausible joke.

Seven years ago, he was seen as a buffoonish reality TV star willing to say outrageous, even racist things to get attention, only to upend the political world with an election win that proved the doubters wrong. Now he is the head of a movement that has dominated the Republican Party for years. Yet with subpoenas and recriminations flying, his hopes to replicate the surprise of his 2015 announcement appear more problematic.

If few really took Trump seriously back then, everyone does now, both his core supporters who see him as their combative champion and the critics who view him as an existential threat to American democracy. The defeat of so many of Trump’s allies in last week’s midterm contests and the failure of Republicans to run away with an election that they should have easily won if history were a guide have raised questions about whether he is at a moment of weakness.

One of the main signs that Trump has lost political clout is that conservatives have shown they are more willing to criticize him. As my colleagues Lisa Lerer and Reid J. Epstein wrote, “there are signs of another Republican effort to inch the party away from the former president.” Republicans have flocked to television shows to declare that there is no single leader of the party anymore. “We’re not a cult,” Senator Bill Cassidy of Louisiana said on NBC’s “Meet the Press” on Sunday. Rupert Murdoch’s conservative media outlets have increasingly lashed out at Trump, branding him “the Republican Party’s biggest loser.”

The scope of Trump’s troubles was reinforced yesterday. They are not only political but legal as well. He faces possible contempt after failing to comply with a subpoena from the Jan. 6 committee. Unsealed court briefs documented the fight over government papers that Trump took when he left office, while a congressional report outlined how foreign nations spent lavishly at his Washington hotel while he was in office. His once-deferential vice president, Mike Pence, who is releasing a memoir today, said in a new interview that Trump had been “reckless” on the day of the Capitol riot.

Trump is also no longer the unquestioned presidential front-runner, according to surveys conducted since last week’s disappointing midterms for Republicans. They show he faces serious potential competition from Gov. Ron DeSantis, who cruised to a landslide re-election victory in Florida, should he choose to run. A YouGov poll showed DeSantis leading Trump among Republicans, 42 percent to 35 percent, while a survey by the Texas Republican Party indicated that DeSantis led among Republicans there with 43 percent to 32 percent for Trump. Other surveys by the conservative Club for Growth showed DeSantis leading in four states.

But critics have counted Trump out before and lived to regret it. As The Times’s Michael C. Bender wrote, the former president still commands the loyalty of “a solid and devoted core of conservative voters” who appear “ready to follow him wherever he leads again — even if into defeat.”

The Trump of 2022 has far more tools at his disposal to announce his presidential run than the Trump of 2015 did. Back then, his team felt compelled to pay extras $50 each to show up for the now-famous escalator ride to the lobby of Trump Tower. When he labeled immigrants from Mexico “rapists,” Republicans denounced his attack, and they scoffed at his vow to build a wall and make Mexico pay for it.

Today, the Never Trump establishment wing of the party is even less powerful than it was seven years ago, while the former president has vast financial resources and the experience and the network that come from two national campaigns. He also still has that animal cunning that has allowed him to overpower so many Republicans who defied him.

It may be instructive to remember that Trump somehow kept hosting that show of his, “The Apprentice,” on air for 14 years, replaying essentially the same story line over and over again as the audience kept coming back for more. So when he takes the microphone at his Mar-a-Lago estate in Florida tonight for his “special announcement,” he is determined to script another season of conflict and drama in hopes of being renewed.

We have the tools we need to transition to clean energy, but we need to do it faster, Bill McKibben argues on “The Ezra Klein Show.”

A Democrat’s win in a red-leaning Washington congressional district shows that Republican extremism has a political price, Michelle Goldberg says.

Naomi Biden, President Biden’s granddaughter, will be married on the South Lawn of the White House this weekend. And while it may not have the stakes of, say, a meeting in the Situation Room, planners are treating the details of the wedding as though they were highly classified, The Times’s Katie Rogers writes.

Nine presidential children have wed on the White House grounds, most recently Tricia Nixon in 1971, whose ceremony was a relatively public affair, with a front-page photo in The Times the next day. Naomi Biden will be the first presidential granddaughter to wed at the White House. The rarest of White House weddings happened in 1886. That was when the president himself, Grover Cleveland, married there, with John Philip Sousa leading the band. (No press was allowed at that one.)