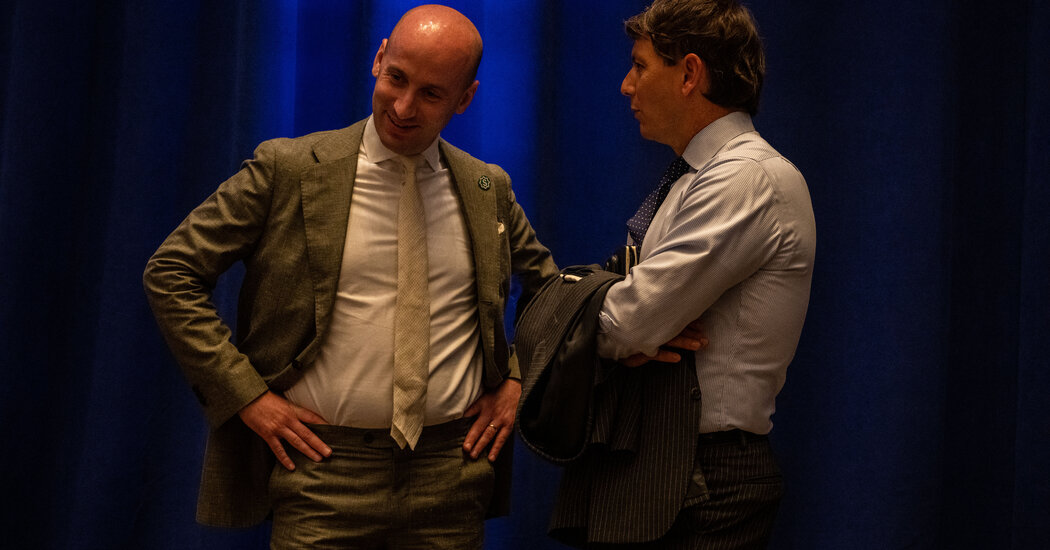 The Justice Department has subpoenaed two former top White House political advisers under President Donald J. Trump as part of a widening investigation related to Mr. Trump’s post-election fund-raising and plans for so-called fake electors, according to people briefed on the matter.

Brian Jack, the final White House political director under Mr. Trump, and Stephen Miller, Mr. Trump’s top speechwriter and a senior policy adviser, were among more than a dozen people connected to the former president to receive subpoenas from a federal grand jury this week.

The subpoenas seek information in connection with the Save America political action committee and the plan to submit slates of electors pledged to Mr. Trump from swing states that were won by Joseph R. Biden Jr. in the 2020 election. Mr. Trump and his allies promoted the idea that competing slates of electors would justify blocking or delaying certification of Mr. Biden’s Electoral College win during a joint session of Congress on Jan. 6, 2021.

A subpoena does not indicate someone is under investigation, but the Justice Department may send one to people from whom it is seeking information.

Key Revelations From the Jan. 6 Hearings

Making a case against Trump. The House committee investigating the Jan. 6 attack is laying out a comprehensive narrative of President Donald J. Trump’s efforts to overturn the 2020 election. Here are the main themes that have emerged so far from eight public hearings:

The subpoenas were issued to a wide range of people who either worked in the White House or on the Trump campaign, including senior officials like the campaign’s chief financial officer; personal aides to Mr. Trump; and the former chief of staff to Ivanka Trump, the president’s daughter who also served as one of his senior advisers.

The Save America PAC was formed soon after Election Day in 2020, as Mr. Trump aggressively raised money on his baseless claims of an election “stolen” through widespread voting fraud.

Among the recipients of subpoenas from a grand jury sitting in Washington are relatively junior aides from the White House and Mr. Trump’s 2020 campaign. While the subpoenas asked for information concerning the Save America PAC, they also sought communications with several pro-Trump lawyers — like Kenneth Chesebro — who helped devise the electors plan.

Numerous subpoenas focused solely on the fake elector plan were sent to Republican state lawmakers and state Republican officials allied with Mr. Trump starting this spring. Those subpoenas were signed Thomas P. Windom, a veteran federal prosecutor, who has been leading the inquiry into the scheme.

At least one of the new subpoenas bore the name of a veteran fraud prosecutor, and still another had the name of a third federal prosecutor, Mary L. Dohrmann, who has been working in recent months with Mr. Windom.

Last month, for example, both Mr. Windom and Ms. Dohrmann filed appearances in a case brought by the lawyer John Eastman, one of the architects of the fake elector scheme, who is seeking the return of a cellphone seized from him by federal agents in June.

Mr. Jack’s role in the White House was generally confined to advising Mr. Trump on races further down the ballot. He has not been paid by Save America.

Mr. Miller has been paid by Save America since leaving the White House, but he is not known to have had a planning role in the electors scheme or the fund-raising efforts, although he did discuss electors on television.

On Dec. 14, 2020 — the day the Electoral College met to cast its votes for president — Mr. Miller appeared on Fox News and announced that state lawmakers in several key swing states were in the process of sending “an alternate slate of electors” to Congress.

NFL Week 4 grades: 49ers earn ‘A’ for dominating win over Rams; Ravens get ‘D’ for blowing big lead vs. Bills