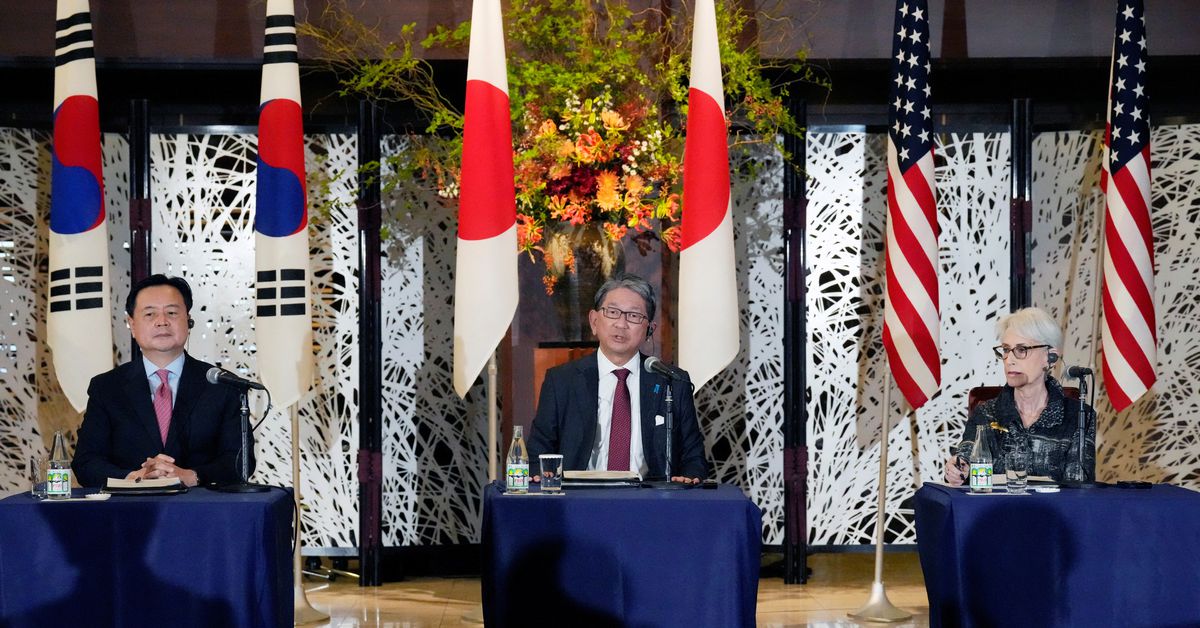 TOKYO, Oct 26 (Reuters) – The United States, Japan and South Korea warned on Wednesday that an “unparalleled” scale of response would be warranted if North Korea conducts a seventh nuclear bomb test.

Washington and its allies believe North Korea could be about to resume nuclear bomb testing for the first time since 2017.

“We agreed that an unparalleled scale of response would be necessary if North Korea pushes ahead with a seventh nuclear test,” South Korean First Vice Foreign Minister Cho Hyun-dong told a news conference in Tokyo.

“We urge (North Korea) to refrain from further provocations,” Sherman said, calling them “reckless and deeply destabilising for the region.

“Anything that happens here, such as a North Korean nuclear test … has implications for the security of the entire world,” she said, sending a thinly veiled message to Pyongyang’s supporters, China and Russia, in the UN Security Council.

“We hope indeed that everyone on the Security Council would understand that any use of a nuclear weapon will change the world in incredible ways.”

For the first time since North Korea began testing nuclear weapons in 2006, China and Russia this year vetoed a U.S.-led push for additional Security Council sanctions.

North Korea has been carrying out weapons tests at an unprecedented pace this year, firing more than two dozen ballistic missiles, including one that flew over Japan.

Angered by South Korea’s military activities, Pyongyang last week fired hundreds of artillery shells off its coasts in what it called a grave warning to its neighbour to the south.

In September, the USS Ronald Reagan and accompanying ships conducted joint military exercises with South Korean forces in response to a North Korean ballistic missile test in what was their first joint military training involving a US aircraft carrier since 2017.

In response, the United States, South Korea and Japan have committed to deepening cooperation, Mori said.

“We agreed to further strengthen deterrence and response capability of the Japan-U.S. alliance and the U.S.-South Korea alliance, and to promote further security cooperation among the three countries,” Mori said.

On mounting tensions between China and Taiwan, Sherman reiterated the United States’ stance that it does not support Taiwan’s independence, but that it does not stop it from working with Japan and South Korea to help Taiwan protect itself.

“United States has repeated publicly that we do not support Taiwan’s independence, but we want to ensure that there is peace, and so we will be doing whatever we can to support Taiwan and to work with Japan and with Republic of Korea to ensure that Taiwan can defend itself,” Sherman said.

At a Communist Party meeting this month, Chinese President Xi Jinping called for accelerating China’s plans to build a world-class military and said his country would never renounce the right to use force to resolve the Taiwan issue.

China claims democratically ruled Taiwan as its own territory, while Taiwan’s government strongly objects to China’s sovereignty claims and says only the island’s 23 million people can decide its future.