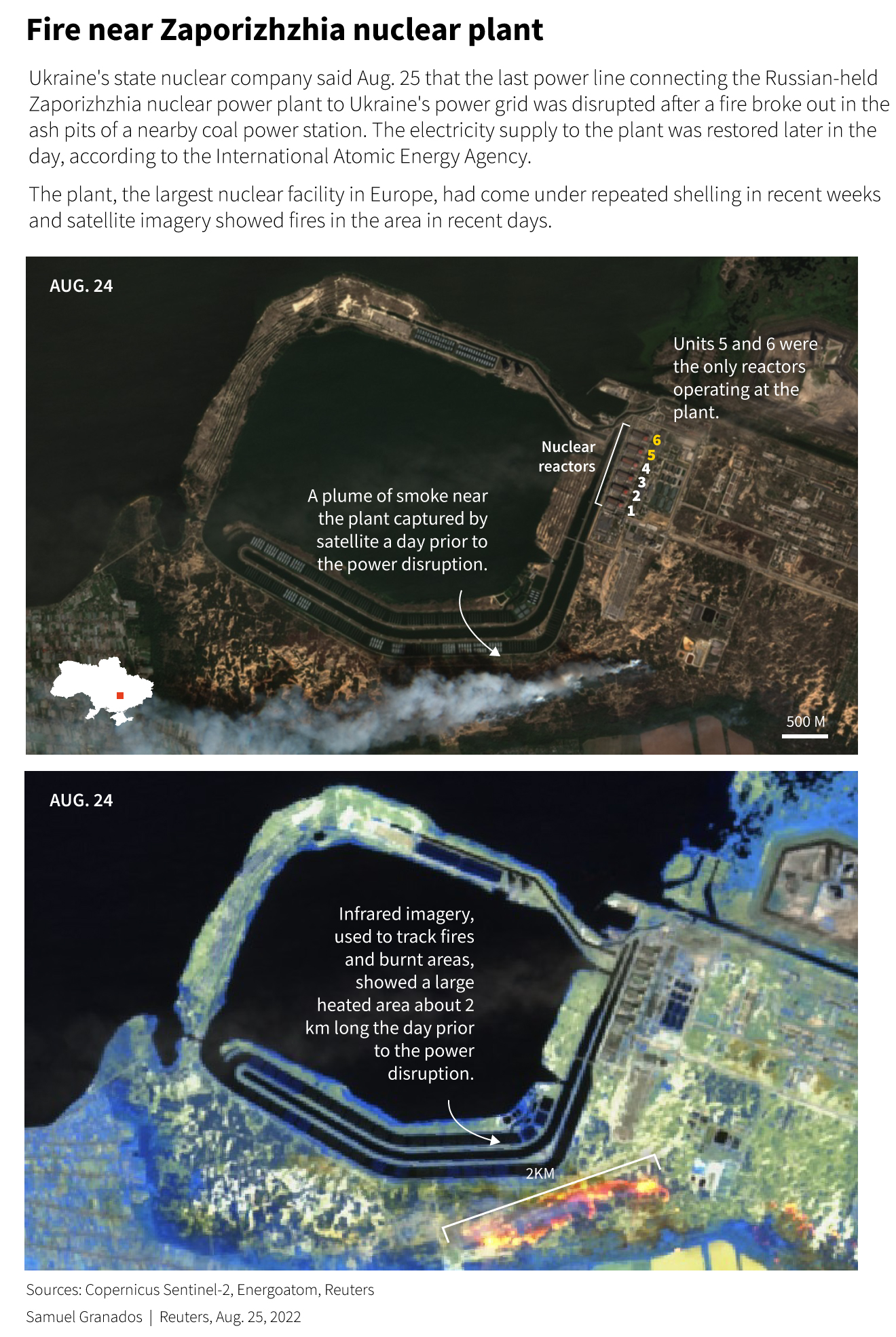 President Volodymyr Zelenskiy said Russian shelling on Thursday had sparked fires in the ash pits of a nearby coal power station that disconnected the Zaporozhzhia plant from the power grid. A Russian official said Ukraine was to blame.

Back-up diesel generators ensured power supply vital for cooling and safety systems at the plant, Zelenskiy said, praising the Ukrainian technicians who operate the plant under the gaze of the Russian military.

“If our station staff had not reacted after the blackout, then we would have already been forced to overcome the consequences of a radiation accident,” he said in a video address on Thursday evening.

“Russia has put Ukraine and all Europeans in a situation one step away from a radiation disaster… Every minute that Russian troops remain at the nuclear power station there is a risk of a global radiation catastrophe,” he said.

Residents in the capital Kyiv, some 556 km (345 miles) to the northwest of the plant, expressed alarm at the situation.

“Of course everyone is afraid, the entire world is afraid. I really want the situation to become peaceful again,” said businessman Volodymyr, 35, who declined to give his last name. “I want the power shortages to be overcome and additional facilities to be operational.”

Ukraine’s state nuclear company Energoatom said electricity for the plant’s own needs was now being supplied through a power line from Ukraine’s electricity system. It later said one of the plant’s two functioning reactors had been reconnected to that grid.

Vladimir Rogov, a Russian-appointed official in the occupied town of Enerhodar near the plant, blamed Ukrainian armed forces for Thursday’s incident, saying they caused a fire in a forest near the plant.

“This was caused by the disconnection of power lines from the Zaporizhzhia nuclear power station as a result of provocations by Zelenskiy’s fighters,” Rogov wrote on Telegram. “The disconnection itself was triggered by a fire and short circuit on the power lines.”

Russia’s Defence Ministry said on Friday its forces had destroyed a U.S.-made M777 howitzer which it said Ukraine had used to shell the Zaporizhzhia plant. Satellite images showed a fire near the plant but Reuters could not verify its cause.

Energoatom said Thursday’s incident had been the first complete disconnection of the plant, which has become a hotspot in the six-month-old war.

The regional authorities in Zaporizhzhia said more than 18,000 people across several settlements remained without electricity on Friday due to damage caused to power lines, without specifying which lines they meant.

A Reuters cameraman said there was electricity as normal in the city of Zaporizhzhia on Friday.

Russia invaded Ukraine in February, captured the plant in March and has controlled it since, though Ukrainian staff still runs it. Russia and Ukraine have accused each other of shelling the site, fuelling fears of a nuclear disaster.

The United Nations is seeking access to the plant and has called for the area to be demilitarised. International Atomic Energy Agency (IAEA) officials are “very, very close” to being able to visit Zaporizhzhia, agency Director-General Rafael Grossi said on Thursday.

Germany on Friday condemned Russia’s continued occupation of the plant. “The situation (there) is still very, very dangerous,” a foreign ministry spokesperson said.

Nuclear experts have warned of the risk of damage to the plant’s spent nuclear fuel pools or its reactors. Cuts in power needed to cool the pools could cause a disastrous meltdown.

Paul Bracken, a national security expert and professor at the Yale School of Management, said the concern was that artillery shells or missiles could puncture the reactor walls and spread radiation far and wide, much like the 1986 accident involving the Chornobyl reactor.

A failure at the Zaporizhzhia plant could “kill hundreds or thousands of people, and damage environmentally a far larger area reaching into Europe,” Bracken said.

“Russian Roulette is a good metaphor because the Russians are spinning the chamber of the revolver, threatening to blow out the brains of the reactor all over Europe,” he said.

Russia’s ground campaign has stalled in recent months after its troops were repelled from the capital Kyiv in the early weeks of the invasion, but fighting continues along the front lines to the south and east.

Russian forces control territory along Ukraine’s Black Sea and Sea of Azov coasts, while the conflict has settled into a war of attrition in the eastern Donbas region, made of Donetsk and Luhansk provinces.

Explosions were heard early on Friday in the southern city of Mykolaiv, a key battleground as Russian forces try to push further westwards along the coast to cut Ukraine off from the Black Sea.

The immediate cause of the blasts was unclear, regional governor Vitaliy Kim said, adding that two villages nearby had been shelled. There were no reports of casualties.

The Ukraine military said its forces had repulsed Russian assaults on the towns of Bakhmut and Soledar in the eastern Donetsk region and struck ammunition depots and enemy personnel in the southern Kherson region.

Ukrainian forces fired some 10 rockets from a U.S.-supplied HIMARS multiple rocket launcher at the town of Stakhanov in the eastern Donbas region, pro-Moscow breakaway officials in Luhansk were quoted by Russia’s TASS news agency as saying.

Reuters was unable to verify the battlefield reports of either side.

The Kremlin says its aim is to “denazify” and demilitarise Ukraine and remove perceived security threats to Russia. Ukraine and the West say this is a baseless pretext for a war of conquest.